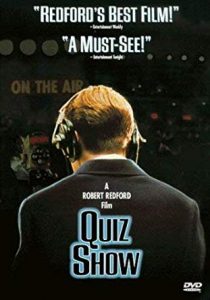 Quiz Show was a critical success but a box-office bomb. To me, however, the most remarkable thing about Quiz Show is that it was ever made at all. For Quiz Show is not just a nostalgic portrayal of the self-confident, normatively white America of the 1950s, it is also a remarkably acute meditation on the role that television played in the fall of America’s WASP elite and the rise of today’s Jewish hegemony.

There are four principal Jewish characters in Quiz Show. Dick Goodwin (played by Rob Morrow) is an ambitious Harvard-educated lawyer whose memoir, Remembering America: A Voice from the Sixties, is the basis of the story. Herb Stempel (played by John Turturro) is a cringy, high-strung quasi-autistic savant from Queens who became famous for his six-week winning streak on the game show Twenty-One, produced by Dan Enright (born Ehrenreich) and Albert Freedman. It turned out that the producers of Twenty-One rigged the show because champions with winning streaks attracted larger audiences and sold more Geritol.

When Stempel’s ratings plateaued, Martin Rittenholm from Geritol (Martin Scorsese, in a wonderful minor role) asked for a new champion.

Enter Charles Van Doren (played by Ralph Fiennes), the scion of America’s white intellectual elite. Van Doren was the son of Pulitzer Prize-winning poet, critic, and Columbia Professor Mark Van Doren and novelist Dorothy Van Doren. He was a nephew of Pulitzer Prize-winning biographer Carl Van Doren. Charles Van Doren earned a B.A. in Liberal Arts from St. John’s College in Annapolis, an M.A. in astrophysics from Columbia University, and a Ph.D. in English, also from Columbia. He also studied at Cambridge. At the time of the film, he was teaching English literature at Columbia. 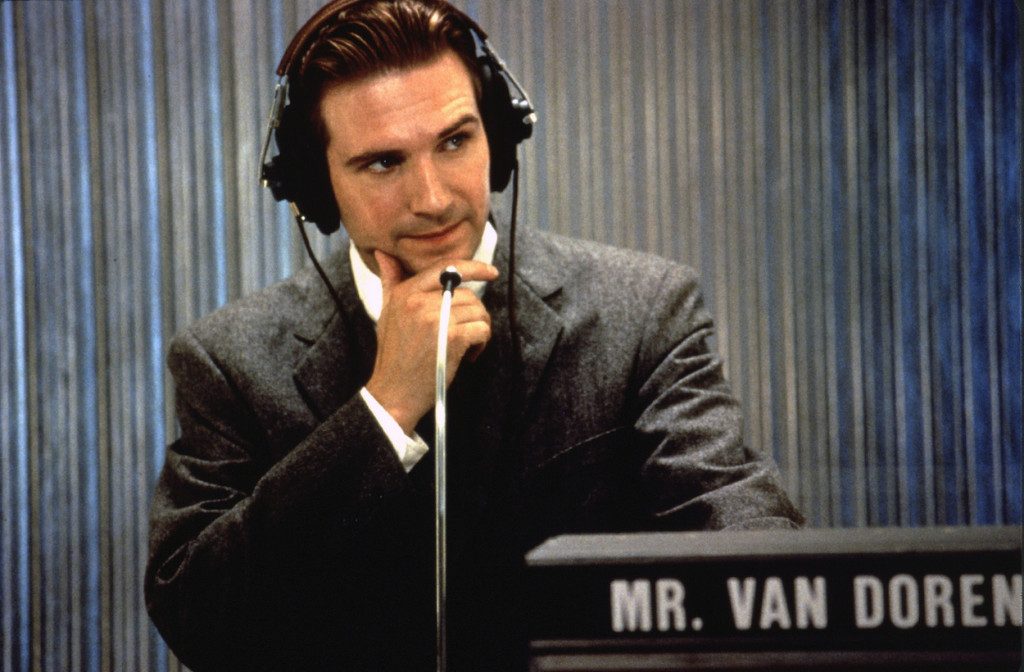 The film offers an affectionate portrayal of Charles Van Doren’s world. At a birthday party for his father Mark Van Doren (wonderfully played by Paul Scofield), the elder and younger Van Dorens carry on their conversation in quotes from Shakespeare and banter with Thomas Merton and Edmund “Bunny” Wilson. (The warm relationship between Charles Van Doren and his father is one of the best aspects of the movie.)

When Van Doren tries out for another Enright and Freedman quiz show, Tic-Tac-Dough, they steer him toward Twenty-One. When they propose giving him the answers, he rejects it as dishonest. But when Van Doren is on live TV, they give him a question that he had correctly answered in the tryouts. Stempel, meanwhile, takes a dive by giving the wrong answer to an easy question, and Van Doren is crowned the new champion. Van Doren objects to being, in effect, tricked into taking part in a rigged game, but Enright and Freedman salve his conscience by telling him that he is promoting higher educational standards to American schoolchildren. The money also helps. 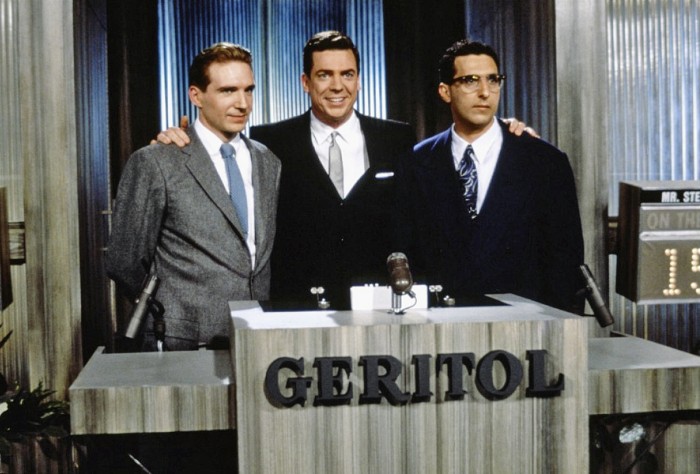 Enright and Freedman are a pair of oily operators, but giving people answers was the least of their sins. After all, they had to give contestants the answers only because the questions were incredibly difficult. But seeing people answer difficult questions actually encouraged viewers to take education more seriously. Furthermore, as the suave gentleman from Geritol, Martin Scorsese, points out, if game shows can’t manage the rise and fall of champions by feeding them answers or demanding they take falls, they can accomplish the same effect by simply making the questions easier, i.e., by lowering standards—with its predictable effect on the public mind—which is exactly what they did. Besides, nobody believes that in a magic act, the lady is actually sawed in two. The point is to entertain. And Twenty-One was not just entertaining, it was edifying.

Unfortunately, when Enright and Freedman made Herb Stempel take a dive, the unstoppable force of Jewish neuroticism crashed into the immovable object of Jewish unscrupulousness, and the result was a huge explosion. The highly neurotic Stempel was humiliated by being forced to fail on an easy question. He also lost his winnings in a bookie’s “investment” scheme. Stempel threatened to expose Enright unless he got him back on TV. Enright tried to placate him and string him along with empty promises, carefully laying the foundation for discrediting him as insane by taping his rants and offering him free visits to a psychiatrist. Finally rejected, a vengeful Stempel went to a District Attorney, who convened a grand jury. But Enright managed to get the finding sealed.

The whole thing would have blown over rather than up were it not for the catalyzing agent of Jewish ambition, in the form of Dick Goodwin, trying to work his way out of a minor staff position in the House Committee for Legislative Oversight. Goodwin went to New York and eventually unraveled Enright and Freedman’s whole scheme. A Congressional hearing was called. Stempel finally returned to the spotlight he so craved and told his story. The president of NBC and the head of Geritol denied any knowledge of the fix and blamed Enright and Freedman. Enright and Freedman accepted full responsibility. Charles Van Doren, however, out of a typically white surfeit of conscience, gave an eloquent confession. 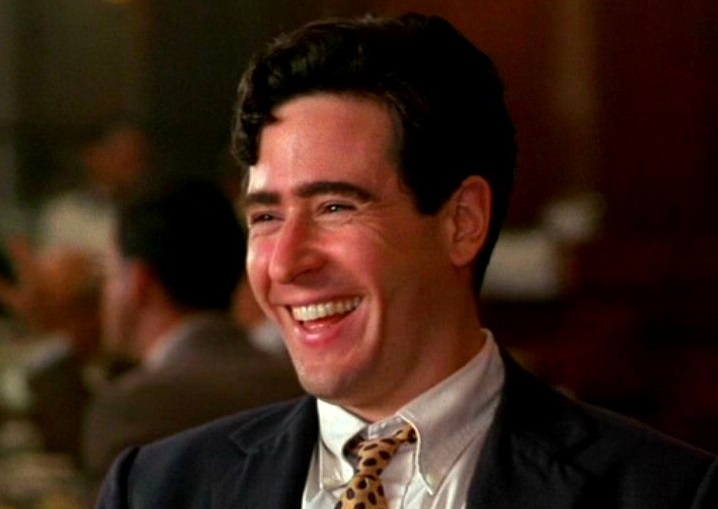 None of the people who lied faced any negative consequences. NBC and Geritol continued to rack up millions. Enright merely laid low for a few years, then returned to the game show business, where he too made millions. Freedman ended up working for Penthouse magazine.

Goodwin, who died in 2018, went on to be a speechwriter and an aide to presidents John Kennedy and Lyndon Johnson, and also to Senator Robert Kennedy. (His second wife, Doris Kearns Goodwin, is a presidential biographer plagued with charges of plagiarism.) Stempel went to college and ended up working for the New York Transportation Department. He still lives in Queens.

Charles Van Doren was the only person in the whole sordid affair to face negative consequences for his testimony, solely because he told the truth. After his run on Twenty-One, NBC had hired him for The Today Show. After his testimony, he was fired and forced to resign from his instructorship at Columbia. When caught in a perfect storm of Jewish unscrupulousness, neurosis, and ambition, his Aryan sense of honor was his undoing. Thus the story of Charles Van Doren can be seen as the epitome of the fall of the WASP ruling class and the rise of our hostile Jewish elite.

Quiz Show is surprisingly frank about Jewish ethnic hostility toward founding-stock Americans. Dick Goodwin is portrayed as a vulgar arriviste. In the opening scene, he chomps a cigar while being shown an expensive convertible by an unctuous salesman. Later, when Charles Van Doren and his father treat him to lunch at the Athenaeum Club, his table manners are atrocious. He also remarks on the absence of Jews at the club. He bristles when people call him Mr. Goldwyn rather than Mr. Goodwin. Yet, for all that, he has a genuine admiration for the intellect, manners, and lifestyle of the Van Dorens—to the point that his shrewish Jewish first wife accuses him of being “the Uncle Tom of the Jews.”

Stempel has unalloyed hostility to Van Doren, referring to him as an “uncircumcised prick.” When Stempel realizes Goodwin is Jewish (as if there could have been any doubt), he asks how a guy like him could have gotten into Harvard. (Now we wonder how the descendants of the people who founded Harvard can get into Harvard.)

I don’t know how closely the script hews to Goodwin’s book, but I imagine such sentiments only made it into the film as part of a larger Jewish triumphalist narrative. If so, it strikes me as a miscalculation, because I can’t imagine that such sentiments sit well with normal white moviegoers. This is why I include Quiz Show in my list of Goebbels Award winners, namely mainstream Hollywood films that Joseph Goebbels would have released without changing a frame.

I highly recommend Quiz Show to racially conscious whites. It is a beautifully realized portrait of the America that was ours, and it contains a surprising amount of truth about how we allowed it to be taken away from us, and by whom.