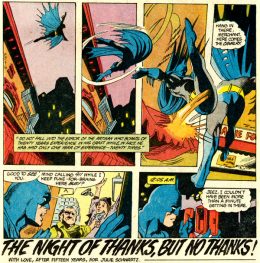 Other than with the campy television program from the 1960s, you’re probably not going to equate Batman very often with comedy.

Of course, there is ample room for dark humor in Batman stories. The Killing Joke by Alan Moore is great example. But this is not the same thing as comedy, in which the universe itself is funny. With Batman, the universe is more twisted than anything else. It’s always high noon in the middle of the night with the forces of abject evil baying like ravenous hyenas, waiting for civilization to weaken and stumble. All that we’ve worked for is beset on all sides by corruption and barbarism and apathy, and is always a knife’s edge away from pure anarchy. That’s why need vigilant heroes like the Batman as a bulwark against our greatest fears.

Over the top just a wee tad? Sure. But we love it anyway.

While most superhero comic books recognize Good and Evil, Batman stories tend to have a more Right-wing appeal for the way they identify this evil. For Batman, evil is not highbrow so much as it is base, brutish, and nasty. Superman may zoom through the heavens to thwart Lex Luthor’s latest ingenious scheme or defend Earth from some intergalactic predator. But Batman is the one getting his knuckles bloody as he beats mafia henchmen to a pulp. Unlike most other heroes, Batman must stoop to face evil as if it were vermin. And the deranged, in the Batman world, may as well be vermin. Notice how Batman’s villains are all caricatures of the insane: Joker, Riddler, Penguin. They don’t even have super powers. They’re just stark raving mad and obsessively diabolical. Batman has to deal with hideous people like this. And he is only a man, so it all takes effort.

A more Left-wing approach would be for the hero to “punch-up” (to borrow a phrase from Doonesbury’s Garry Trudeau). In such a milieu, the wealthy and powerful are the root of all evil since they are most often blamed for greatest Left-wing evil of them all: inequality. A true Left-winger’s heart bleeds for the downtrodden, the poor, the underdog. Such a hero may have to deal with trouble on the street, but more often than not, it is the respectable, beautiful elites lurking in their mansions with bags of money who are the real culprits. Look to the Spirit, another urban crime fighter, who is a little more along these lines than Batman is. In any case, since inequality among humans is inescapable, evil in a Left-wing world must be permanent.

Not so for the Right-wing. Evil is not some socioeconomic construct to be eliminated by progress, but something that lies in the hearts of all men. Batman has it too, and that is why we love him. He contains it, he overcomes it. This is a struggle we all have to face. Further, because he has intimate knowledge of evil, he knows that we must be ruthless when fighting it. You must stamp evil out, or it will consume everything. I’ll even go so far as to say that most Right-wingers have a little id-like Batman living inside their minds, itching to bust heads. Where a Left-winger may feel compassion for the deranged and seek a cure, Right-wingers will more likely see monsters in human form who must be stopped, one way or another. Where a Left-winger would prefer to send a thief to prison for rehabilitation, a Right-winger would wish he could cut the thief’s hand off.

And this is very real.

I’m reminded of a story the great Iowa wrestler Dan Gable relates about his sister, who was raped and murdered in the 1960s when he was still in high school. As Gable tells it, he made himself obsessed with wrestling in order to take his parents’ minds off their all-consuming grief. He obliterated everyone in his weight division and won the state tournament, but it didn’t matter. His parents’ couldn’t let go. Every day, Gable’s father would take an unloaded rifle to a hill near the prison and wait for the convicts to be let out into the yard. Then he would find the man who murdered his daughter, take aim, and fire. And fire. And fire.

Remember that Bruce Wayne’s parents were also murdered in cold blood, and the boy responded in an eerily similar way. If there is one word to describe such a reaction, it is “healthy.” It is the ardent desire to never let evil out of your sights, and to fire and fire and fire. That is essentially what Batman is all about.

Yet, if evil can be stamped out or contained in Batman’s Right-wing urban purgatory, then a world without evil could theoretically exist. What then? Well, this is where comedy comes in.

By funny, I don’t mean black comedy or satire. I’m thinking more along the lines of Benny Hill or the Keystone Cops minus all the sped-up motion. This precious concept is best illustrated by my all-time favorite Batman story which appeared in Detective Comics Issue 567 in October 1986. It’s entitled, “The Night of Thanks, but no Thanks!” It’s a one-shot story written by none other than Harlan Ellison. And it is hysterical.

It’s shortly after midnight, and we find Batman about to swoop down upon a convenience store robbery. But when he arrives, the proprietor puts a gun to the thief’s head and tells Batman to find a payphone and call 911. Grudgingly, Batman does so.

Half an hour later, Batman spots a mugging in progress, a man trying to rob a lady. Our masked hero then rushes to the lady’s aid only to find her now beating the crap out of the mugger, Ruth Buzzi-style, with her purse. She then orders Batman to make himself useful and call a cop. Next we see ol’ Bats back on the phone saying, “Yeah, it’s me again. Wanna make something of it?”

So, you see where this is going. Batman finds a crisis, and either he is not the one to solve it or he discovers it’s not really a crisis or he actually makes matters worse. A young man is about to jump off a ledge, but before Batman can make his cinematic rescue, a cop reaches through a window and beats him to it. Batman finds someone trying to break into a car only to discover that it is the car’s owner who had locked his keys inside. Batman busts a drug deal and then learns that he had just blown the careful ruse of an undercover cop. He then sees someone on a ladder disabling a security alarm. Turns out it’s a technician who is innocently fixing it. She then asks Batman to hold her flashlight while she works and gripes when he doesn’t hold it steadily enough.

Finally, 3:54, he spots an actual crime. A big, bald-headed brute coming his way eating a candy bar. The man has the nerve to toss the wrapper onto the pavement. Batman stands heroically in this criminal’s way and gets on his case for littering.

Yes, the great Batman, reduced to fighting the dreaded crime of littering.

And just when you think the Caped Crusader may actually have a fight on his hands, the gentleman concedes the argument as eloquently as possible. He picks up the wrapper and tosses in it a trash can, all the while apologizing profusely and thanking Batman for reinforcing good citizenship. He walks away wishing Batman the very thing he wants the least: a quiet evening.

The story ends at 4:16 am with Bruce Wayne’s butler Alfred discovering Bruce sulking in his study. “Master Bruce!” the old man says, “Your patrol ended early. Was it a trying evening filled with the usual danger, sir?”

Reflecting on the Batman-as-comedy idea, I believe, may teach folks on the Right the greatest lesson about fighting evil. It really is about the destination and not the journey. Fighting for fighting’s sake is, for lack of a better term, bad. Evil can be stamped out or contained. That is the very purpose of our forming great civilizations. And once we get to that point, we should know to tone down the fighting to appropriate levels. We should know to relax a little and enjoy our lives. Unlike the Left which will never stop fighting for a utopia that can never be achieved, we on the Right understand that life doesn’t have to be a constant struggle, and it doesn’t have to be perfect. There will be nights when things take care of themselves just fine. And we should be thankful for that.

But if we take the fighting evil idea too close to heart, it becomes more about the former and less about the latter. When that happens, we’ll end up just like Batman, haunting a peaceful city and wishing desperately for war.

Only then it won’t be quite so funny.