Toward a White Wakanda 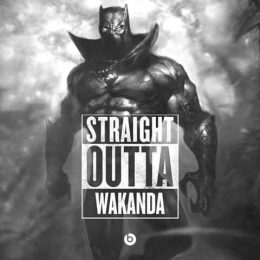 The new Black Panther film is problematic in some respects. Seeing blacks idealized in an advanced world of the future–that of Wakanda–is probably bad for the average white person. It doesn’t give them the sort of accurate view of a typical black society I showed in my Similarities article.

In the same way smart Jewish and white writers ventriloquized Will Smith in the SWPL’s beloved Fresh Prince of Bel Air, the Wakanda movie presents blacks as the standard bearers of civilizational advancement which mostly whites have led. Just as we have the charming Will Smith’s delivery combined with the white / Jewish writer’s wit, we have the black’s physical prowess in combat combined with the sort of inventions and conventions that are typically the fruits of a white mind.

In my opinion the film should have a disclaimer so that impressionable young white kids don’t start believing falsehoods about the comparison between black and white societies. Having said this, I think most white kids, will have their Hollywood programming vanish in a matter of seconds with a stroll in the typical black ghetto, but I feel for the naive few who will find themselves in bad situations because they confuse this movie’s fantasy with reality.

Having said this, there are some things about Wakanda that I don’t mind. For one, I like that it actually had a black director (Ryan Coogler) and black writers (Joe Robert Cole and Ryan Coogler), rather than Jewish ones. Maybe this is the reason why Wakanda is so ethnonationalist and rather un-multicultural. Black people tend not to have a duplicitous “nationalism for me and multiculturalism for thee” agenda but rather are straightforwardly themselves.

I also support the right of blacks to envision futurist all-black societies. I myself have supported the idea of a black Singapore, where the talented tenth could escape the chains of the rest of their bell curve and live in a society that would rival any other nation. I speculated that a eugenic policy could maintain a high enough level of intelligence in the founding stock’s second generation to keep the society from sinking into the typical black mold, but now that I think of it, other things could keep it better than the present black average. For example, the mainstreaming of genetic engineering could enable blacks to implant a density of high IQ genes which even surpasses the Asian or white average. This would probably require a corresponding alteration of traits like boosting impulse control and technological creativity to make the intelligence go further, but I could see genetic engineering being the source of a lasting economic boom.

Apart from having high average IQ a la white or Asian nations, there is only one other way nations can become rich: possessing natural resources. In the same way that gulf states rely on oil for their massive amounts of wealth, Wakanda relies on a seemingly magic mineral called Vibranium.

One would think Africa could experience a similar situation to the gulf states given its immense mineral wealth, but Africans have not even come close. It could simply be that Africa doesn’t have such a resource, but it seems that perhaps with the exception of Botswana, which has capitalized on being nice to white people and made itself a relatively prosperous wildlife tourism hub, Africa is failing to make the best of its situation. One imagines Arabs would make more of it ceteris paribus.

In a recent video, Ryan Faulk points out that there is no way that Africans can blame the white man or trade deals for their slow economic development because Asians were just about as wealthy as blacks following WWII, and they were subject to the same trade deals, yet places like South Korea and Japan became some of the most advanced nations in the world and in some ways outpace any white nation. This big picture view, according to Faulk, invalidates the claims of what I’d call anti-white conspiracy theorists who believe that whites in western nations magically cause all the problems of the third world. While western nations may prevent those nations from developing along alternative lines (I’m thinking of how western elites viewed Ghaddafi’s pan-African idea as a threat) the west basically wants Africa to develop. Bill Gates and other business magnates donate billions to try to get it to increase in wealth. Advocates of international trade obviously would have every incentive to open up a vast market on the dark continent.

The west always wanted Africa to develop. Whites always felt a sense of white man’s burden to blacks. Whites like Albert Sweitzer dedicated their lives to helping black Africans. While there were certainly wars of conquest and even genocide, Africa is wealthier now because of white incursions. Faulk notes that African nations became wealthier under colonial rule, and that nations without it, such as Liberia, remain at or close to subsistence level that prevailed throughout the continent prior to colonialism.

To tell you the truth, I feel the same way about blacks as most white people. I would rather see them dignified and prosperous than living in mayhem and squalor. I differ from most whites in the sense that I understand a fundamental change to the genome of most black communities is necessary for them to achieve on par with whites. Realizing this, it pains me to see the intelligent, sophisticated blacks I know have few or no children and low IQ types reproducing at high rates. I understand that keeping blacks at a low genetic IQ will probably reduce worldwide miscegenation since intelligent blacks mostly miscegenate with whites, but in an ideal sense, I think it’s best for whites and blacks to develop in ways that make each as dignified as possible, while remaining separate such as to preserve the sort of valuable uniqueness one sees in Wakanda or, someday, in a white ethnostate.

Black futurism made Wakanda possible in imagination. It remains to be seen whether a black nation can become like a first world Wakanda. Blacks now have an idea of a great black ethnostate. They now must work on recruiting a select group of blacks, implementing eugenic policies, and possibly utilizing genetic engineering. Whites meanwhile have everything they need to for a great ethnostate, but they lack the idea. In the same way that blacks needed Afrofuturism before they could envision an ideal state, we need white futurism before we can reach a white ethnostate. We need a new white culture that galvanizes whites to celebrate and defend racial and cultural heritage while crafting a new one which can embrace the challenges of the future. Most whites aren’t satisfied with basic racial identity. They need a culture in which to express themselves. Not all of the white bell curve is satisfied with the abstract notion of things like genetic distance. Also, the culture should simply esteem symbols, dress, music, etc, of the past but create a fundamentally new culture, a new way of being. It must not simply seek to co-opt things from other cultures. For example, it’s not enough to do what evangelicals have done and create Christian rap, Christian rock, etc, but to come up with a new form of musical expression all our own. Perhaps it could touch on past styles, but it must be fundamentally new. We need a new art style, a new philosophy, and new social ideal.

We really were kings once. To be kings again, we’ll have to escape the race-destroying specter of neo-liberal globalism. To do that, we must find our creative essence as a race. Maybe this culture will arise naturally. Maybe it will receive a boost from purposeful WNs. Regardless, we need to encourage all creative minds, visionaries, and dreamers to start paving the road to a white Wakanda.

« The Legend of Suram Fortress