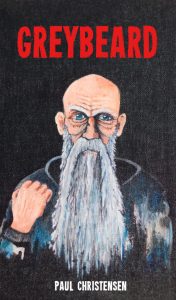 Greybeard is the new novel by Paul Christensen, author of The Hungry Wolves of Van Diemen’s Land, The Heretic Emperor and Reveries of the Dreamking (the first two of which are reviewed here at Counter-Currents). I’m ashamed to admit that all of these previous books had passed me by for some reason, even though their subject matter is distinctly in accord with my own interests. Therefore, wyrd has decreed that my introduction to Christensen’s work should be via the eponymous Greybeard and I’m glad to report that it’s a fine starting point.

Greybeard begins in 1974 in East Germany. Our hero is arrested by the secret police for being in the wrong place at the wrong time and, having just dropped some acid, he’s not best prepared for their Cold War interrogation techniques. After suffering torture and a year’s imprisonment, Greybeard is released back to his native Britain. The story then picks up at Christmas 2015 with Greybeard back in Germany visiting his grandson. His life after his earlier imprisonment seems to have slipped past like a psychic lacuna. The Germany of 2015 (at the height of the refugee crisis) is in many respects very different to the East Germany of 1974, but one thread of continuity persists: the totalitarian mindset and ethnomasochism belonging to politicians of the left. Following a personal tragedy, Greybeard becomes a revolutionary outlaw in open rebellion against the prevailing ethos and system.

Greybeard is a satirical novel very much in the same vein as Alex Kutagic’s Mister (also reviewed on Counter-Currents). Like Mister, Greybeard is a titular hero who acts as an Everyman character, reflecting the reader’s own sense of alienation from the insanity of certain aspects of the modern world. But the ways in which the two characters respond to the dystopia they find themselves within differ markedly. Mister, rather like Lewis Carroll’s Alice, is constantly having to refamiliarize himself with the peculiar habits of the world in which he finds himself. He is in a constant state of disbelief and bemusement, and he fumes against the decline of all civilised standards with an impotent rage:

He had railed against the mediocrity of the common man, fulminated against their choice of political leaders, ranted against the cowardice of politicians beholden to œconomic interest, and raged against the supine addiction to comfort and safety of the general voting public, because they would rather make small concessions here and there than actively defend their freedoms. […] He had expressed himself on the subject in no uncertain terms — except he had done so privately, strictly among trusted friends and family, where there was no risk and therefore where it did not count, while acting in the outside world just like the common man.

Greybeard, however, declines to restrict his complaints to mute thoughts and instead decides to take arms against a sea of troubles and, by opposing, end them. And this, the story of Greybeard’s single-minded rebellion against Germany’s (and more generally Europe’s) political and media establishment, forms the substance of the story. The reason for Greybeard’s more active opposition to the contemporary orthodoxy is to be found in his sleepwalking through the 80s, 90s and naughties. It is only when events shock him into a reawakening that he is able to really look around and see what is happening. Mister is like the proverbial frog that sits in a slowly heated pan without noticing the increased temperature. Greybeard has been thrown onto a hotplate and he responds accordingly.

What is notable about Greybeard is that he is self-consciously identified as a 1970s hippy. The references to Klaus Schultze, Tangerine Dream and even Comus, pin him down as a man whose ideas were formed during the extended comedown from the idealism of the 60s. (This review is being written whilst listening to Caravan in order to establish an authentic aural atmosphere). Interestingly, Greybeard never renounces his hippy ideals. He comes to see that his youthful idealism requires him to act in opposition to the current paradigm, and that this means fighting against the refugee influx. Other of his contemporaries have been slowly acclimatising themselves to the new normal and revising their worldviews accordingly. Greybeard is an unrepentant, old school hippy, so he is implacably opposed to the policies of Mutti Merkel’s Germany.

Reading Greybeard reminded me how difficult it is to write satire in the current year. With all the passing references to the mendaciously stupid things that politicians say, I became rather confused about whether they were being invented as satire or reported verbatim. For instance, I know that the quote included herein about the mass sexual abuse committed in Cologne on New Year’s Eve 2015 (“A minister. . . claimed that internet posts criticising the invaders were ‘at least as bad’ as the sex attacks themselves”[pp. 40-1]) is genuine. But what about the other comments that are attributed to various officials throughout Greybeard? Certainly, nothing said elsewhere is more mendaciously stupid than the “at least as bad” comment; how could it be? So how is it possible to satirise this situation when the situation is already a parody of civilised society? I would hesitate to say that after Cologne there can be no satire, but perhaps Greybeard will be the last satire of our age?

I hope that in the future we can reread Greybeard and refuse to believe that it is anything other than an absurd caricature of today’s situation in Europe. If that comes to pass then it will mean that Europe has returned to some degree of sanity and the lunacy of the present era has become an embarrassing, suppressed memory. But if we carry on complaining in private, too scared to speak out publicly, then we might find that the temperature continues to rise imperceptibly until one day we look around and find that there is nothing left worth preserving.

If Orwell were alive today he would no doubt be aligned with the Houellebecq/Kurtagic/Christensen school of satire. And, as Orwell never actually said, “in an age of universal deceit, telling the truth is a revolutionary act”. Read Greybeard and join the revolution.