Four Flags Over Alabama:
The Strange & Marvelous Career of a Confederate Raider, Part 2 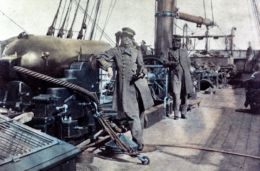 Captain Semmes and Lieutenant Kell aboard the Alabama, ca. 1863.

Grand Tour of a Cause-Célèbre

Perhaps just as galling to Unionists as Alabama‘s destructive impunity was her sheen of romance that so enthralled the public imagination.