Peacemaker vs. Arcane: A Comparison of Poz 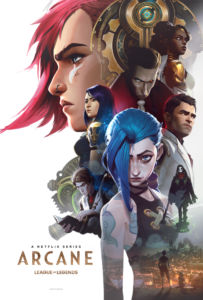 I just binge-watched the new series Peacemaker, a continuation of the character from 2021’s The Suicide Squad. I had heard it described as good, with a few woke moments. What I saw was one of the most anti-white Leftist shows that I had seen in a while. In contradistinction, the show I had seen prior to this was Arcane. The two programs share similar elements: a lesbian relationship between main characters, a white enemy, “badass” females, prominent diversity, interracialism, discussions of clueless privilege, and so on.

Yet, whereas Peacemaker‘s woke moments stick in the throat, Arcane‘s skillful weaving of these elements into the show barely registered. Both shows are made with skill and are good apart from their woke moments, and loathe as I am to offer advice to my enemies, I would definitely choose the subtler ways in which Arcane promotes “appropriate behavior” to its viewing audience than Hollywood’s current ham-fisted approach. The main difference is that Peacemaker hates its white male audience, whilst Arcane flatters its.

Peacemaker opens with the titular character talking to a non-white janitor. After some silly James Gunn dialogue, the janitor castigates Peacemaker as a “racist superhero” who only kills minorities. He says, “You need to watch white people as closely as you watch people of color so you see more of them committing crimes.” Peacemaker reacts apologetically. It seems that John Cena’s experience kowtowing to the Chinese has prepared him for this role. After the credits, we are treated to a scene between two married black women, one of whom is atrociously fat.

Peacemaker visits his father’s house. As he enters, there is a FOX News lookalike on the TV, featuring a man who is the spitting image of Rush Limbaugh ranting about “below their lying liberal human faces lurk extra-terrestrial beings who want nothing other than for our civilization to fail!”

Peacemaker’s father is a cartoon white supremacist bigot. He is nasty without reason or respite. He refers to his son as “simp,” “pathetic,” “a fucking pussy,” and “Nancy boy.” At one point he says, “What the fuck, if you can’t do some good with it, maybe take out a couple commies, a papist, some blacks, maybe a kike or something.” I liked him immediately.

The next scene is set in a restaurant, where there is a discussion about Peacemaker referring to the waitress as “sweet cheeks” and how inappropriate it was to say. Later on, in a bar, an attractive blonde woman is leered at by three white reprobates. She beats one of them up and then castigates Peacemaker for his creepy behavior, then goes on a rant about how she can’t drink a beer in quiet because, “I don’t know, I wear make-up?” My heart bleeds for her lot in life.

Soon after this, the fat black character describes Peacemaker as “sexist, probably racist.” Then there is an awesome fight scene to close out the show.

That was only the first episode. Detailing all of the instances of Leftism in the other seven episodes would render this essay of unwieldy length. Highlights include a cringe lecture on why the term “Oriental” is bad, comic neo-Nazi skinheads wearing Klan-like devil hoods, and people driving cars with “14WRDS” license plates. The final monologue by the aliens warns that humans “ignore science in favor of populist leaders.”

In terms of Leftist preaching, I think it’s the worst show I’ve ever watched. It’s certainly not holding back on pushing that denazification conditioning button that Hollywood’s been installing into the willing, pliable soft meat of the populace over the past few decades. The morality play is the same one that’s trotted out over and over. The worst thing to be is a racist. Whites are all racists, and all non-whites are not. The path to absolution lies in becoming an ally, which means complete compliance and subjugation to the Left. Whites who don’t comply are Nazis. Nazis are without any rationality, morality, or worth, and can be done away with by any means necessary.

As proof of this, the show features a second masked anti-hero character, Vigilante. In one scene, he slaughters a family with no second thoughts, but later on he infiltrates a prison and mocks the neo-Nazis there, asking them to “list the good things blacks have given to society.” He also suggests that a black guy fucked their mothers. Yes, even a cold-blooded murderer of children is redeemable as long as he isn’t pro-white.

Moving on to Arcane, it is an animated show based upon the characters and world of the League of Legends online game. It’s not a prerequisite to have played the game to watch the series. It is, without hyperbole, one of the most excellent shows I have ever seen, and the animation, writing, and character development are excellent. It has a 100% critic’s rating and 96% audience rating on Rotten Tomatoes — a far cry from those situations where critics and audience are divided by the rape of franchises like He-Man and Ghostbusters. If you want to condition the minds of the populace, subtle ways that offer the conditioning inside a delectable treat is going to work better than ham-handed moral preaching. Arcane potentially represents a newer, subtler, and more insidious kind of poz.

The show is centered on a sister duo. Violet (Vi) is a shaven-headed badass lesbian chick, and Powder (Jynx) is a badass tech genius. I know that eyes may be rolling at these descriptions, but these characters are built up slowly and expertly over the episodes so that, when they come into their own as “badass chicks,” it feels completely natural and not out-of-place. This is achieved through the show’s slow boil and excellent character development. Characters act out of consistent motivation, are not perfect (Vi takes hits and fails constantly), and don’t shove their “badassery” down your throat, but leave you to come to that conclusion through their actions. A race-mixed rogue enforcer is slowly built up into a romantic relationship with Vi, as opposed to being thrust instantly into a relationship in one scene. The bad guy, Silco, is a white dude, but he’s one of the best bad guys in fiction and has depth.

The show’s depiction of race-mixing is interesting (I know, I know, bear with me here). This show doesn’t repeat that tired “of course!” black-male-with-white-female trope that Hollywood loves to humiliate us with. This is why I call Arcane a newer, subtler kind of poz. The show depicts numerous black female characters who are attracted to white males. Instead of the usual humiliation of the white male audience, this show flatters them. The character Mel, who is depicted as very beautiful and elegant, is drawn to the white character Jayce, who is depicted as capable and attractive. When Mel’s mother, Ambessa, comes to the city of Piltover to visit her daughter, she treats herself to the local “cuisine” — a retinue of beautiful white boys.

In summary, Peacemaker‘s messaging is blatant. It’s the same old Hollywood crap from an out-of-touch echo chamber of an industry where you can’t get along if you don’t sing the same tune as everyone else. Arcane is harder to classify. Whilst it’s got many of the same themes of diversity and mixing as every other mainstream media product, it’s harder to ascertain the motive. It’s possible that the show’s writers were merely trying to tell the story they wanted and that its messaging is incidental to that story. Perhaps that non-dissidents who have been souped in Leftist messaging since birth simply write stories in that way naturally; all people write within the context of their age, after all.

It’s notable that this is the first show produced by the animation house that did the cutscenes for the game, so they come from outside the Hollywood bubble and may feel less pressure to conform because of it. Whatever the reason, there’s a dangerous lesson to be learned by the Left: If they pump the brakes and take a slow burn approach, they could very well achieve all their goals with little resistance. It’s our role on the Dissident Right to point out what others do not yet see.

« Counter-Currents Radio Podcast No. 434 The Writers’ Bloc with HapaPerspective on Militias