A Response to Dr. Robert Jensen 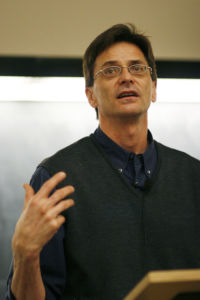 I found Dr. Robert Jensen’s recent interview at Counter-Currents with Hubert Collins refreshing and thought-provoking. It is very seldom that a Leftist academic is willing to have a discussion with White Nationalists at all, and I admire his open-mindedness. He articulated the basis of his outlook very well. Most Leftists take their own outlook for granted and never explain why anyone else ought to share their positions; they react with hysteria to any disagreement.

Dr. Jensen argues that patriarchy is unnatural; that it is the product of particular social conditions and not biologically ingrained. He traces its origins to the agricultural revolution.

Male dominance is not universal among mammals. Basal primates were solitary animals,[1] and evolved sociality separately from other mammals. Monogamous breeding pairs are common among basal primates such as lemurs,[2] [3] and likely were among early primates as well. These pairs are female-dominated. The evolutionary benefits of this are not well understood, but for a monogamous animal there is no particular benefit to male dominance, as its main reproductive advantage lies in controlling multiple females. The dominance of one sex over the other may ease conflict.

We cannot know with confidence the sexual dynamics of pre-agricultural humans. Our closest relatives, chimpanzees and pygmy chimpanzees, are both different from each other and make for a poor comparison with humans. Chimpanzees are patriarchal, while pygmy chimpanzees are matriarchal, but in both species females alone raise offspring and males have a low-investment breeding strategy.[4] Promiscuity is rampant, and males have evolved small penises and large testicles for sperm competition.[5]

Humans show physical adaptations for monogamy and polygyny. The human penis is larger than that of any great ape and unadorned, and the testicles far smaller than those of chimpanzees or pygmy chimpanzees.[6] Monogamy likely evolved in humans because it reduces intragroup competition between males and from sexual selection on the part of females for males with higher investment in their offspring. Women have been shown to be most attracted to male faces that show a combination or balance of masculinized (suggesting higher testosterone and physical strength) and feminized (suggesting a greater tendency towards sexual loyalty) traits.[7] As male dominance holds no particular advantage for a monogamous species, it is likely that Dr. Jensen is largely correct in his view of sexual roles in pre-agricultural societies. There is biological evidence to support this. From the early Stone Age until the Agricultural Revolution, there was a marked decline in the prominence of male brow ridges; a masculinized trait, until it partially rebounded during the early Agricultural Revolution.[8] Greater sexual dimorphism in primates is associated with polygyny or promiscuous mating patterns,[9] both of which create selection pressure for male dominance over females, while monogamy does not. My own speculation is that as expanding populations led to more complex warfare, the leadership of men grew ever more advantageous. The only likely candidate for a matriarchal civilization is ancient Minoa, and it is logical that, isolated on an island and with an unmatched fleet, it may have survived as a remnant of prehistoric matriarchy as late as the Bronze Age.

When he leaps from claiming that patriarchy is a relatively recent development in the natural history of mankind to speaking of the socially constructed “naturalization” of hierarchy itself, Dr. Jensen crosses from the empirically defensible into flight of fancy. This is likewise the case when he attributes human success to Hunter-Gatherers, or when he ignores the thousands of years of biological selection that have occurred since the Agricultural Revolution. Consider that modern Northern Europeans are in large part descended from Western Steppe Herders who only invaded Western Europe in the Late Stone Age.[10] Man today is not the same animal that he was 10,000 years ago. Every change in society necessarily changes selection pressures. Man is as much a part of the natural world as the birds and the bees. The pressures that brought about patriarchal society were as natural as any other.

Dr. Jensen’s case for radical feminism is that

Humans have been successful in evolutionary terms because of our capacity for cooperation and a long history of generally egalitarian social relations, including relations between men and women. Our gathering-and-hunting ancestors did not, for the most part, organize their societies in hierarchical fashion . . .

This is an empirical claim, and an easily disproven one. In evolutionary terms, an organism’s success lay in spreading its genes. The Agricultural Revolution and the changes that it brought about led to a massive increase in the human population.[11] Everywhere that Hunter-Gatherers have encountered agriculturalists, they have been shown to have lower evolutionary fitness than them. Of the three population groups that contributed to modern Europeans, the aboriginal Western Hunter-Gatherers left the smallest genetic legacy.[12] Their contribution is smaller than that of the Early European Farmers who entered the continent from Anatolia, and the Western Steppe Herder pastoralists that invaded from the East and bequeathed Europe her language and culture.[13] In Japan, the native Jōmon Hunter-Gatherers were replaced at around 90% by Yayoi and Kofun agriculturalists.[14] In Southern Africa, the native Bushmen hunter-gatherers were similarly outmatched by the agricultural Bantu.[15] Attributing the success of mankind to its most primitive and backwards societies is not only absurd, it is reactionary in the truest sense.

Inequality and hierarchy are the law throughout the animal world.[16] There is nothing in human behavior that is unique among animals. It is only a matter of complexity. More cognitively-developed mammals and birds communicate in a basic language consisting of at most a few dozen auditory or somatic signals, each functioning like an ideogram; an alarm call to signal a predator, a snarl to say “back off,” a lowered head to show submission. Men have a more detailed language of words and grammar; a difference of degree, not kind. The differences in hierarchy are of a far lesser degree. Animals can inherit both materials and social status.[17] Hierarchy and cooperation are inseparable. More advanced, civilized societies have more complex hierarchies because they demand more complex forms of cooperation than merely that needed for hunting and gathering. The degree of difference is even less marked with nationalism. Nations and wolfpacks both have borders; only we mark our territories with posts and fences instead of urine.[18] Dr. Robert Sapolsky, a liberal Jew who studies primates, was forced by his research to the following conclusion:

Primates are hard-wired for us/them dichotomies. Our brains detect them in less than 100 milliseconds. Our views about things are driven by implicit (unconscious) processes. It’s depressing as hell. A hormone like oxytocin makes you nicer to “us” and crappier to “them.” What hormones are good at is magnifying things that are already there. That tells you that ‘us and them’ is a fundamental fault line in our brains.[19]

Dr. Jensen cannot dismiss this as “irrational” without stepping upon his own arguments for the benefits feminism brings to men. Patriarchy, he claims, restricts men with “rigid” and “repressive” gender norms. It keeps them from “embrac[ing] a fuller range of human emotions and capacities.” It “destroy[s] the possibility of experiencing real intimacy.” Is there any experience so wholly irrational as love and intimacy? Ingroup preferences are instinctual. Dr. Jensen admits that “xenophobia” has an “appeal . . . not just today on the Right but throughout human history.” Anti-racism is psychological repression. I am not convinced that masculinity is anything other than the natural inclination of men, but if it is an emotionally repressive force, any condemnation on those grounds ought to be applied universally.

There is no risk that Dr. Jensen’s views might ever win widespread support. They are far more unpopular than White Nationalism. There will never be a populist uprising to “dramatically reduce per capita consumption in the First World — not just of the top 1% or top 10%, but of everyone except the poorest,” or to throw open the gates to the Third World so that the quality of life in the nations of the global North and South might be leveled in pursuit of an “equitable distribution of wealth in the world.” As an individual, he seems well-intentioned and utterly harmless. He could be dismissed as an eccentric but for the practical effects of his views.

Dr. Jensen notes that essentially Leftist ideas are “applied according to the cynical interests” of American hegemony in foreign policy. The same is true of domestic policy.

It is precisely because his views on race are so widely rejected by the public (Critical Race Theory can’t even win 30% of the popular vote in San Francisco[20]) and yet shared by powerful elites that it is critical to confront them. To the extent that discrimination against non-whites stubbornly persists in America, it is entirely a grassroots affair. It exists in spite of official condemnation. The practical function of the supposed moral imperative to create equality, of the entire anti-discrimination paradigm from the beginning of the “Civil Rights” movement, is to provide justification to massively expand the power of reigning institutions. The supposed moral need for equity demands social changes to create an impossible equality. These changes are too contrary to instinct to win public support; the task falls entirely on the existing power structure. The supposed moral imperative for them becomes an anti-democratic myth, pitting a “progressive” elite against a resistant population. The elite is legitimized in reshaping society in ways that bolster its own power, such as importing cheap labor and pro-system voters from the Third World, or massive wealth transfers from small businesses to oligarchs through Coronavirus restrictions and racial justice riots. All opposition to the unrestrained exercise of power by the reigning system is delegitimized as contrary to the moral imperative for equity. The impossibility of equality is a feature, not a bug. What better goal to justify ruling power than one that can never be realized?

The practical effects of Dr. Jensen’s egalitarian advocacy are not radical at all, but quite the opposite, as they uphold and entrench existing power. Only White Nationalism, which utterly rejects the currently reigning system’s moral foundations entirely and embraces — not represses — natural instinct can truthfully promise a new, different, and better society.

Fietz, Joanna. “Monogamy as a Rule Rather than Exception in Nocturnal Lemurs: the Case of the Fat-tailed Dwarf Lemur, Cheirogaleus medius,” Ethology: International Journal of Behavioral Biology 105, no. 3 (December 2001).

Jacobs, Tom. “WHY WE ENGAGE IN TRIBALISM, NATIONALISM, AND SCAPEGOATING,” Pacific Standard, March 5, 2018.

Maslin, Mark. “Early humans had to become more feminine before they could dominate the planet,” The Conversation, June 18, 2015.

[3] Joanna Fietz, “Monogamy as a Rule Rather than Exception in Nocturnal Lemurs: the Case of the Fat-tailed Dwarf Lemur, Cheirogaleus medius,” Ethology: International Journal of Behavioral Biology 105, no. 3 (December 2001).

[8] Mark Maslin, “Early humans had to become more feminine before they could dominate the planet,” The Conversation, June 18, 2015.

[19] Tom Jacobs, “WHY WE ENGAGE IN TRIBALISM, NATIONALISM, AND SCAPEGOATING,” Pacific Standard, March 5, 2018.

« Counter-Currents Radio Podcast No. 423 The Best Month Ever on The Writers’ Bloc with Mark Gullick