The Only Battle We Remember 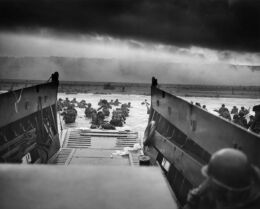 D-Day is one of the most important anniversaries on the American calendar. Even though it was only the 77th anniversary this year, politicians and other dignitaries still felt it was needed to tweet about the day. It’s not the worst holiday in the world. It ultimately celebrates the heroism of white men in combat. I think most would prefer it to Martin Luther King Day or George Floyd Remembrance Day.

Most of the commemorations are in line with patriotic displays of the past. A little hokey, a little overblown, and a bit loose with historic facts. But, in spite of their cheesiness, most of them are harmless evocations of a treasured past.

However, there is an insidious element to the remembrance. The Lincoln Project (yes, the disgraced anti-Trump vehicle is still around) released a viral ad ahead of the weekend that celebrated the soldiers who stormed Normandy as Antifa.

The work of opposing fascism is as American as apple pie. As we again face the rise fascism — this time on our own shores — that work must continue. #DDay pic.twitter.com/9HVP44O5U3

Featuring a gruff narrator speaking in a tone reminiscent of truck commercials, the ad declares: “Who is Antifa? They stormed the beaches of Normandy. . . and gave their lives to face down and fight back against fascism.” It then goes on to claim that everything American soldiers did in Europe during WW2 was the work of Antifa. “Anywhere Antifa saw fascism, they fearlessly and relentlessly annihilated it.” (Curiously, the ad does not claim the heroism of the American soldiers in the Pacific theater as Antifa. Wonder why. . .)

The ad claims “the fight against fascists was not simply a battle between opposing nations — it was a war against humanity.” The ad says this “war” continues today while images of Trump and the January 6 protesters are displayed on screen. It concludes that anti-fascism “is an American ideal that should be memorialized, because it was paid for — in blood.”

Describing the men who stormed Normandy as Antifa is nothing new. Politicians and cable news hosts have used this talking point since Charlottesville. The Lincoln Project is just the most over-the-top expression of it. These are former Republican strategists lionizing demented Leftists as the equivalent of U.S. Army Rangers braving machine gun turrets. Just imagine telling someone 10 years ago that campaign advisers for George W. Bush, John McCain, and Mitt Romney would be declaring they’re Antifa. The sight would be great: boomers in khakis and American flag lapels going out to stand in solidarity with transgender freaks and heroin addicts as they throw explosives at federal courthouses. This is real American patriotism, according to the Lincoln Project.

It’s tempting to dismiss the ad as nothing more than an attempt by the Lincoln Project to generate maximum attention from libs and obscure their pedophile scandal. That’s their motivation, of course, but it taps into a larger public sentiment. MSNBC celebrated the ad as a true testament to the American character of the D-Day anniversary. World War II is regularly celebrated as the war that defeated fascism and racism and made the world safe for democracy. D-Day aligns with that narrative. The battle is not just one about honoring soldiers who fought for their country — it’s about reaffirming the system’s ideology.

It is odd to claim we liberated the world from a totalitarian menace when the real winner of World War II was the Soviet Union. Half of Europe fell to communism and the Soviets were able to wage their war against humanity without limits. But anti-communism is treated as passe and no longer relevant to contemporary discourse. Communism is largely dead as a menace, but so is fascism. There hasn’t been a truly fascist government in 76 years. We still have communist governments, even if most of them are communist in name only. But anti-communism is treated the same way as anti-redcoat or anti-monarchist. Anti-fascism, however, is seen as extremely relevant. It’s a battle we still fight today, apparently.

Which explains why D-Day is remembered every year and other battles are not. Some of it is due to the battle having a set date. Gettysburg lasted for three days and Iwo Jima lasted for over a month. But if any of these battles solidified system ideology as much as the popular conception of D-Day, we would find a day to commemorate them every year. The Normandy beaches serve a purpose.

Ordinary Americans remember the day as an act of simple patriotism. But its popularity serves a more insidious goal of retconning American identity as a commitment toward anti-racism and anti-fascism. By appropriating D-Day and exploiting the patriotic feelings of Middle Americans, the system can bamboozle them into accepting all kinds of nonsense. “America First is a Nazi slogan we defeated!” “Nationalism is un-American and we defeated it at Normandy.” “Antifa is not a threat, it’s an all-American tradition.”

Most conservatives hate Antifa and would probably scoff at the Lincoln Project ad. But this messaging does have an effect and it does shape how NPC Americans view history.

It should be said that it was completely untrue. American soldiers who fought in World War II largely supported segregation and they saw their fight as standing up for their country, not some ideological fantasy cooked up by Never Trumpers nearly 80 years later. Southern soldiers proudly displayed the Confederate flag and one of the first flags hoisted in “liberated” France was a rebel banner. Many of the veterans would be appalled by modern America, especially the far-Left group they’re compared to.

Now there are issues with the Greatest Generation. As Christopher Caldwell writes in The Age of Entitlement, this generation was largely responsible for integration and the other “revolutions” in the post-war era. The Boomers were too young to enact these changes in the 50s and 60s. But this was largely the work of the generation’s leadership rather than a definitive trait of every generation member. For example, World War II veterans in the South still vigorously resisted integration.

Many of these misguided Americans were tricked into embracing racial egalitarianism after the war due to the narrative that WW2 was the great anti-fascist crusade. In order to complete it, we needed to eradicate “fascism” at home. Sadly, the American people fell for it.

Challenging the prevalent World War II narratives is vitally important for the Right. We can’t create a positive American nationalism if we allow our people to believe we were Antifa in World War II. It wasn’t that simple or stupid. It’s much better for us to shift the focus to the Pacific, where we engaged in a race war, and to past conflicts than to dwell on Normandy. Our country would be a lot better off if we cared more about Yorktown or the Battle of New Orleans than victories on the Western Front. Those past triumphs can’t be weaponized by pedophile enablers for subversive purposes. They’re genuine victories of the historic American people over foreign enemies.

Much of American patriotism is cringe right now, but it doesn’t have to be that way. Patriotism must celebrate the people who actually made this country and not a revisionist celebration of the present system. Contemporary D-Day commemorations serve the latter. That must change.