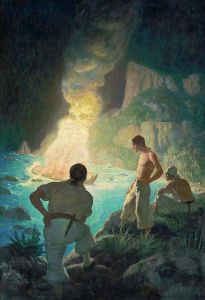 For men on the Right, observable truths about the state of Western civilization intersect like the threads of an unraveling tapestry. We see order giving into chaos; tyranny and anarchy converging and becoming indiscernible in the stew of nature, oppression, freedom, injustice, security, peace, and conflict. An unavoidable perfect storm of societal collapse is churning on the horizon. Yet, there is nothing new under the sun, and history is rife with lessons that are just as applicable today as they ever were.

One such lesson can be distilled from events of the late 18th century aboard HMS Bounty. Her life began as a private merchant collier named Bethia, but in 1787, she was purchased by the British Royal Navy to be refitted for service on a botanical mission to Tahiti to acquire breadfruit tree specimens. Her cargo was to be transplanted to the West Indies as a cheap food source for plantation slaves.

For those who enjoy a good historical movie, HBO Max currently offers the 1935 version of Mutiny on the Bounty starring Clark Gable as Master’s Mate Fletcher Christian and Charles Laughton as Captain William Bligh. Another more recent, but no less entertaining, version of the story is 1984’s The Bounty starring Mel Gibson as Christian and Anthony Hopkins as Bligh. As a man on the Right, I am partial to both Gable and Gibson for their noteworthy stances in the struggle against the far-Left, so I’ll not hesitate to recommend them. I’d be remiss if I didn’t also plug notorious anti-Semite Marlon Brando’s portrayal of Fletcher Christian in the 1962 Oscar-nominated version of Mutiny on the Bounty, but I was just a child when I saw that rendition, and can offer no personal opinion about the quality of the film. (Captain Bligh’s account is available on audiobook here and a quality documentary is available here.)

But I digress. This essay is not a movie review, as directors tend to take liberties with their narratives for dramatic effect. I’d rather stick to the facts, because truth is often more compelling. With that, I’m going to summarize the key events surrounding the Bounty’s voyage and subsequent mutiny, and bridge those events with modern sociopolitical concerns; and for those in search of a more detailed summary, I found a good one here.

As for the characters in this tale of treachery on the high seas; William Bligh was an able and ambitious lieutenant of the Royal Navy who got his sea legs under the command of Captain Cook on his 3rd voyage to the Pacific. Known for being a stern disciplinarian, his temperament would come into unavoidable conflict with the man he eventually chose as second-in-command for the voyage, his then-friend Fletcher Christian. Christian was a nobleman from an aristocratic family that had fallen on hard times. He chose a life in the Royal Navy as a means to regain the status his family had lost. Bligh had sailed with Christian before and knew him to be a capable midshipman.

Though technically only a lieutenant, Bligh was appointed as acting Captain of the vessel in August of 1787 and by December of the same year had enlisted a complement of 46 men into service to King George III. The crew promptly set sail for Cape Horn, but after a month in the Atlantic, facing violently stormy weather, Bligh elected to detour some 10,000 miles into the Indian Ocean by way of Cape of Good Hope and Australia before heading out into the Pacific.

Life aboard a sailing vessel in the 18th century was unfathomably difficult, and as such required near-absolute discipline from the officers and crew. This was especially true of the Bounty due to her small size. Bligh, however, was prone to temper tantrums and harsh punishments that broke down esprit de corps. One famous incident involved a store of cheese that was found to be in deficit. Bligh accused the men of thievery, but it was later exposed that Bligh himself had ordered a subordinate to smuggle some of the cheese to his home before the voyage had set sail. His crew understood the need for discipline, but in the face of this hypocrisy and injustice, Bligh’s tyrannical temperament became too much to take, even for his ranking mate, Fletcher Christian.

After 10 months at sea, the tensions aboard the Bounty found temporary respite when they made landfall in Tahiti in October of 1788. Their detour had caused them to arrive in an unfortunate season that prevented them from transplanting the breadfruit saplings for several months, and in the meantime, they enjoyed the welcoming, friendly nature of the native Tahitians, especially their women. One can only imagine the paradise these men had found themselves in after what must have felt like an eternity aboard the Bounty.

The crew wasted no time settling in with the natives, many taking brides with no objections from the Tahitian men. No doubt the natives’ concerns were alleviated by gifts and trinkets from King George in exchange for the breadfruit and women. However, the crew’s stay was necessarily short-lived, and Bligh knew that he couldn’t allow discipline to fully break down. Therefore, the men were tasked with repairs in preparation for the voyage home. It was at this time that mutinous grumblings began to fester.

In April of 1789, the Bounty set sail back to Portsmouth, England with its cargo of breadfruit saplings. On the 28th of that month, Bligh’s unbearable tyranny could no longer be endured by Fletcher and the crew, and Christian led a mutiny which resulted in Bligh, along with several midshipmen and loyalists, being forced aboard the ship’s utility boat with a few weeks worth of supplies and a handful of cutlasses. They were left to their own devices while the Bounty returned to Tahiti.

In a remarkable feat of seamanship, Bligh managed to sail the small ship to safe harbor in an Indonesian Dutch settlement called Coupang without losing a single crewman. From there, he returned to England to face charges for losing his majesty’s ship to a mutiny. He was thereby cleared of wrongdoing and the Royal Navy sent HMS Pandora in search of the mutineers. The fate of the Pandora was not much better than the Bounty, ultimately wrecking in the unnavigable waters of a coral reef near Australia without completing her mission.

Meanwhile, Fletcher Christian’s assortment of mutineers endured great hardship after leaving Tahiti with their women and some friendly native men in search of the unchartered Pitcairn Island. Mistreatment of the native men led to conflict and a sort of “female mutiny” when the native women sided with their English husbands and turned on their countrymen. Ultimately, most of the mutineers were killed before their fate was discovered by the Royal Navy, though their legacy remains to this day on Pitcairn Island, where some 40-50 descendants continue to live.

What is the lesson of the Bounty?

Civilization is synonymous with rules, hierarchy, honor, and loyalty. But honor and loyalty must be reciprocal. Hypocrisy or complacency erodes trust in leaders, and when these leaders then accuse powerless men of things for which they aren’t guilty, the toxic recipe for mutiny begins brewing.

Western countries are on a journey we did not choose. We were drafted into service to multiculturalism and set sail aboard a metaphorical ship whose fate is no different than that of the Bounty.

Many young white men have found themselves in an intolerable position where, not unlike 18th-century seamen, they are made involuntarily celibate by the forces of feminism. This double whammy of unjust accusations and weaponization of white women has left many white men with no choice but to turn on the system and fight against it.

What is the motive of our leaders and elites? Like the mission of the Bounty, it all comes down to profit and power. We are simply interchangeable tools of the system, tasked with the labor of navigating dangerous waters without concern for our own safety and well-being. We must endure hardship and the lashes of the whip so that those in power can profit.

We’re also not unlike the poor native men of Tahiti whose generosity was squandered by the mutineers. Their women turned on them just as quickly as many of ours have turned on us. After all, when the tables were turned, the well-armed mutineers became the ones with power and that power made them desirable in the eyes of the native women.

So what was the ultimate fate of the Bounty herself?

She was set aflame by the mutineers.

Only time will tell if a similar fate is in store for the United States and the other Western nations that follow her lead.