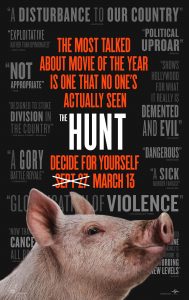 Jason Blum and Craig Zobel’s The Hunt received mixed reviews regarding its sensational plot, where a group of rich corporate types kidnaps Americans — “deplorable” rednecks — to hunt them down.

The Most Dangerous Game, the 1931 adaptation of Richard Connell’s 1924 short story of the same name, is the original source of the “people hunting other people” concept. For example, The Lost Patrol (1935) features a group of soldiers getting picked off one by one until a lone survivor triumphs. The previous incarnation of this trope was Alien. The Hunt, despite all the howls from the Right, is a sharp, funny satire of the culture war, as well as an entertaining depiction of where we are in the red/blue divide.

After a nasty intro on a swanky jetliner, the aforementioned “deplorables” find themselves in a rural field with their mouths gagged (a foretaste of our population being masked). As they work to get the gags loose, they warily bond with each other. One is a conservative radio DJ, another a nurse, another an older veteran. But one woman, Crystal (Betty Gilpin), keeps her distance. She is a little more wary, eyes sharp as she studies the terrain, preparing. . . for what?

Crystal barely offers thanks for help getting her gag loose. Large crates stand before the group. Inside are weapons they must take if they are to survive.

A pig trots out from one of the crates, wearing clothes. As the piggy oinks, shots pop off, and one by one, the people are blown away. The action is fast and brutal, with quick camera shots and good spacing. The deplorables scramble into the woods.

They try to escape, but to where? Can they trust who is beside them? Booby traps and snipers take their toll, and they straggle to a country store.

The survivors appeal to the store’s owners, a kindly old couple. But the couple are hunters, too. They wipe the survivors out, then start bickering about being environmentally conscious. The PC patter is delivered in soft, fussy tones: AARP meets MSNBC.

Crystal, who has been hanging back from the rest, enters the store. The kindly couple prepares to end this year’s hunt, reaching for a shotgun beneath the counter, but Crystal turns the tables on them. The store’s owners tell Crystal they’re in Arkansas, but Crystal catches them in their lie over the price of a pack of cigarettes. With the shopkeepers caught off guard, Crystal has the advantage of surprise.

Crystal meets with a couple of survivors, revealing that she was a soldier in the Gulf War. They try to escape, discovering they’re a very long way from Arkansas (or Kansas, for that matter). Crystal repeatedly outsmarts her would-be killers. They were expecting a pig for slaughter, and got a wild boar instead.

The survivors argue about who their pursuers are. Crystal shrugs as she checks her weapon: “We got to figure if they’re idiots trying to be smart people, or smart people trying to be idiots.”

Crystal tracks the remaining hunters down to a cushy bunker, and it’s funny to hear their PC chatter. They’re never caricatures, but fussy and catty, as if the cast of Seinfeld joined the Taliban. Crystal gets the drop on them and pulls a Josey Wales.

This leads her to Athena, their leader (Hilary Swank), who has been absent from the film except in the first bloody scene on the jetliner. She prepares gourmet grilled cheese, then amidst a yuppie repast of said grilled cheese, good wine, and tasteful, ethical vegetables (with no ketchup), she and Crystal kick, punch, slash, and wail on each other as they exchange worldviews.

It seems the hunters chose Crystal by mistake. The Crystal the hunters wanted was a housewife who signed a conservative petition, not GI Jane.

During the fight, Athena admits she organized these hunts because she had been blacklisted in New York by her firm for a politically incorrect tweet. This is her revenge on deplorables, whom she blames for her expulsion from the good life.

Crystal gets her revenge, then binds her wounds and munches on grilled cheese.

The Hunt expresses political anger and class outrage in the well-fitting clothes of a B action movie. The various pigs in the film reference Animal Farm, and the film satirizes civil war. The yuppies who do the killing are wusses trained by an ex-military type. They do pretty well until the wild card that is Crystal comes on the scene. The flabby, unprepared conservatives are chopped up, as the yuppies eventually are by Crystal, showing that both red and blue people are amateurs who will be offed in a real struggle before the real killers take over: in this case, a cold-blooded corporate femme fatale versus a redneck ex-soldier.

Crystal and Athena’s catfight is a nod to present cinematic and graphic novel conventions — the “designated girl fight” — but it isn’t without its humor and insights about going for the jugular.

I liked The Hunt more than I thought I would, and appreciate the satire mixed with 88 minutes of quick action. It was fun to watch, and don’t forget about the pigs. The film is definitely worth a view.

« Conservatism Against the Avant-Garde