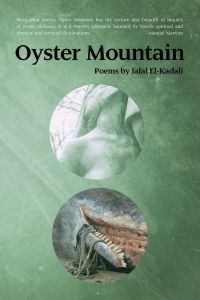 To say that frogs turn
Into princes is blasphemy
Against Nature; Salvador Dali, however
Was a painter who painted the things in his subconscious
The world of his dreams; at least
He didn’t expect anyone to believe that they were real

At least he wasn’t telling lies to children

After 9/11, people began to say that irony is dead. More recently, the corpse of satire has been added to the pile. But these are mere rhetorical devices. What of entire schools? It was easy to be a Symbolist in the Belle Epoch, a Surrealist in the Roaring Twenties. After Auschwitz (Adorno, who said Auschwitz killed poetry, and gets a shout out here), after Covid, what chance encounter with a sewing machine could perplex; what lunch, however naked, provoke outrage?

This is the problem faced by Jalal El-Kadali (presumably, like Hakim Bey, a pseudonym). How can “a poet who works in the surrealist tradition. . . compete in clownworld,” where the non-negotiable consensus is that “cow-farts are changing the weather, the neoliberal world order is secretly run by a cabal of neo-Nazi white supremacists, [and] an increasing number are somehow born into bodies of the wrong sex.”

Like most of the writers alluded to already, the author, though “avantgarde,” also seems to be one of us. So we can rejoice that he seems to have solved the problem, squared the circle, through some combination of talent and perhaps, as Jeremy Reed has speculated about poets in general, a lesion or two of the cerebral cortex, enabling the immediate though involuntary passage from metaphor to perceptual “reality.”

Having succeeded in reinhabiting the domain of surrealism, we can hear some of its voices reappearing; in “Early Modernism” we can sense the fetishism of decadence and eroticized Catholicism of a Huysmans or Barbey d’Aurevilly:

The 19th Century to be modern painted
The most realistic centaur
So well that today his eyes still follow
The little girls from the Catholic school
On excursion at the gallery. . .
But the grownups don’t see what is going on
Those ironically blinkered lapiths
If only they read the plaque they would learn
How in punishment for a past transgression
He is condemned to stay within
The heavy, gold-leafed picture frame from whence
He is yet able to wreck more havoc
Than with technological prosthetics can
Those fast-wearing idols, his epigones.

Later, Uncle Bill Burroughs seems to be unlocking his Word Hoard and starting up another routine: “In Hospital in a Foreign County” illustrates “how an integral body / Of traditional medicine, assisted / By modern surgical science” is practiced:

Each operation an initiation into
A new life astrologically foreordained
And while there was no 100% effective
Restorative, the elderly and terminally sick
Were liberated from their bodies to appear
Before the sliding doors, outside
Resplendent in their new kosha, upon which
They rubbed an ointment to make it both visible and palpable
And so high is the status of sex workers there
That many thus rejuvenated find
A sacred calling in that profession
Patronage by their juniors being regarded
Almost as filial duty
While joyfully husbanded experience
And x-ray-like translucency combined
Make they by far its most beloved practitioners.

And sometimes just for a line or two:

Have you heard about the Skoptsy whose penis grew back again

— “Fruits of the Revolution”

By placing El-Kadali in the Right-wing current of restoring tradition (Pound’s command to “Make it new”) I by no means imply a lack of originality. In fact, he even takes up Adorno’s challenge and gives us a surrealist tour of Auschwitz, taking off from another Adorno aperçu: “institutionalised remembrance, kills what still lingers by the very act of preserving it,” balancing it with quotes from the Austrian corporal and Leonardo Da Vinci.

And the torture chamber didn’t want to let us go
Iron maidens pretending to be service robots
Then the tourguide saluted each member
Of the Blue Race haunting that place.

The camp histories, themselves already surrealistic, get repurposed for poetic effects:

And we witnessed an auto-da-fé
With faggots bound for kindling
Fat ones at the bottom, a grease tray to catch the dripping
To be manufactured into human trope.

Throughout “Barbarity Blues,” the poet rings changes on blue in its various shades, from blue skin to cerulean sky. One wonders if he is alluding to or even aware of the recent controversy over the lack of blue coloration on the walls of the supposed gas chambers, or if this is an example of the way surrealism opens a window on the more real. As Williams S. Burroughs wrote, in the voice of his own Muslim avatar, Hassan i-Sabbah:

Boards Syndicates Governments of the earth Pay — Pay back the Color you stole — . . .

The “name” of Jalal El-Kadali is new to me, and it is perhaps unsurprising that an author who remains pseudonymous has left little biographical traces on the information superhighway; actually, none. More surprising is that such an accomplished poet seems to have published little, this being his first collection, and many of the poems appearing previously in such apparently fugitive online venues as Misery Tourism, Terror House Magazine, and Expat Lit (although one seems to have snuck onto the pages of the Australian newspaper The Age.) Chip Sills and Nine-Banded Books (I initially typed “Nine-Banned”) are to be thanked for bringing this work to the public’s attention, and it can be recommended to any Counter-Currents readers looking for a challenging and rewarding reading experience.