Until the Fat Lady Sings 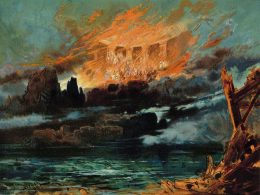 I have made a lot of mistakes in my life. Although most of these mistakes have merely led to embarrassing moments and memories, I am starting to notice the consequences of my lifestyle choices. To put it bluntly, I have wasted a lot of time pursuing the wrong women, friendships, and careers. While these experiences have made me the person I am today, I sometimes feel that my future is somewhat limited by the decisions of my past. After listening to an album inspired by Siegfried and the Nibelungenlied, I am reminded that the future is not always carved in stone and that our adventures are not over until the fat lady sings.

One of my New Year’s resolutions is to wake up early each morning to exercise. As I was working out this morning, I listened to Siegfried by Moonblood. Unlike the rest of Moonblood’s catalog, Siegfried is a concept album based on the eponymous hero and his legendary tales from the Nibelungenlied. The legends of Siegfried might be inspired by the Frankish King Sigebert I of the Merovingian dynasty who ruled Austrasia in the 6th century.

Sigebert married Princess Brunhilda in 567. Their successful marriage inspired Sigebert’s half-brother Chilperic to marry Brunhilda’s sister Galswintha. Chilperic eventually had Galswintha murdered so he could marry his mistress Fredegund. Brunhilda deeply resented the murder of Galswintha and convinced Sigebert to go to war against Chilperic. In 573, Sigebert won a series of battles against Chilperic and conquered most of Chilperic’s kingdom. When Sigebert had Chilperic surrounded in Tournai, Sigebert was killed by Fredegund’s assassins. Tales of these events eventually spread throughout Europe and became intertwined with mythology and folklore. Sigebert became known as Sigurd in Scandinavia and Siegfried in continental Europe. Within a few hundred years, his name and legends were already being carved in stone.

Siegfried’s adventures were first recorded on a series of runestones in Sweden and the British Isles around the 10th century. These carvings were made during the Viking Age and confirm that the tales of Siegfried were transmitted orally before being written down in the Nibelungenlied. The Nibelungenlied is an epic poem written by an anonymous poet in Middle High German around 1200. It is based on the events and characters of the 6th century like Sigebert and Brunhilda while incorporating themes from Germanic mythology. The poem is split into two parts with the first part focusing on the heroic tales of Siegfried.

Siegfried the Dragon Slayer arrives in the city of Worms with the hopes of marrying Kriemhild, the sister of King Gunther. Gunther will allow the marriage on the condition that Siegfried helps Gunther compete in a tournament to marry Queen Brünhild. Siegfried helps Gunther win the competition and both couples get married. Brünhild and Kriemhild eventually become enemies and their rivalry is blamed on Siegfried. Gunther’s half-brother Hagen creates a plan to assassinate Siegfried on a hunting trip and this plan is eventually supported by Gunther. While Siegfried is drinking from a stream, Hagen throws a javelin on the only spot where Siegfried is vulnerable. Siegfried dies and Hagen throws Siegfried’s Nibelung treasure into the Rhine River. The second part of the poem follows Kriemhild as she seeks revenge against Gunther and Hagen while attempting to recover the Nibelung treasure.

These tales are told with a few notable differences in the Poetic Edda and the Völsunga saga. Richard Wagner would draw heavily from both the Nibelungenlied and the Völsunga saga in his four-part opera Der Ring des Nibelungen. In Siegfried and Götterdämmerung (The Twilight of the Gods), Wagner was also inspired by Norse mythology. Wagner’s depiction of Viking helmets and shield maidens were so impactful that these images and concepts still resonate with us today. From video games to heavy metal, the legend of Siegfried has been a big influence on my interests and hobbies. The tragic nature of Siegfried’s fate also resonated with me in my struggles of finding a meaningful career, loyal friends, and a female partner.

Just like Siegfried, my search for a female partner has created a lot of drama in my life. Ever since I was a teenager, I wanted a girlfriend that listened to heavy metal. Yet I quickly realized that the average woman does not listen to heavy metal. So for most of my life, I ended up in relationships with women that I had little in common with, other than our race and our age. Naturally, this resulted in several failed relationships. I would have preferred to find a woman with whom I had common interests and compatible personalities, but that was never really my experience. Finding common ground with a woman has also become more difficult these last few years due to our polarized society. Although I try to avoid making the same dating mistakes from my past, it seems that slaying a dragon is sometimes easier than finding a girlfriend. Finding loyal and trustworthy friends can also become challenging for guys as they get older.

Gunther’s betrayal of Siegfried reminds me that it is better to be alone without any friends than to be surrounded by the wrong friends. Some of the people who I thought were my closest friends ended up betraying me and abandoning me at the worst moments. When they needed my help or were in a difficult situation, I was always there for them. But when I was in a similar situation, they avoided me like the plague. As I have gotten older, I realized that my true friends were always the ones that followed through after offering help and assistance. Whether it was helping me move furniture or picking me up at the airport, actions always spoke louder than words. And just like fake friends, I do not have time for dead-end jobs.

Siegfried was a warrior and a dragon slayer. These pursuits gave his life meaning and purpose. Careers and jobs used to give white men purpose and identity, but not anymore in our feminized, service-based society. Looking back, I wasted a lot of time on dead-end jobs where I did not utilize my talents. I wasted years of my life commuting over an hour each morning to a job I hated with coworkers I hated even more. Despite working hard and keeping my mouth shut, I still got passed over for promotions that went to diversity-hires. Instead of working for global corporations, I should have searched for jobs with family-owned businesses in the suburbs or in rural areas. But due to the COVID lockdowns, finding a job with a family-owned company is probably harder now than finding the Nibelung treasure in the Rhine River.

Although I have yet to be stabbed in the back by a wife and a best friend, I sometimes feel that my fate is carved in stone like Siegfried. After spending years of my life pursuing the wrong women, friends, and careers, it seems that any future opportunities are slowly fading away. Regardless of the future, exercising each morning has helped me put things in perspective. The last song during my workout today was “Brunhild’s Eroberung.” This song reminded me of the colloquial proverb: it is not over until the fat lady sings.

This proverb refers to Wagner’s Götterdämmerung, the final part of Der Ring des Nibelungen, where the Valkyrie Brünnhilde performs a twenty-minute farewell scene that leads to the end of the world. Since soprano singers were typically full-figured women, a few sports commentators in the 1970s made the reference that things were not over until the buxom Brünnhilde sang farewell. Outside of opera and sports, this proverb reminds us that we cannot always predict the outcome of an event that is still in progress. Moreover, we should never assume that things are irreversible or impossible. This holds true for myself and our community.

After all the craziness of 2020, I have no idea what will happen this year. All I know is that the Dissident Right will continue to survive, adapt, and produce great content. This content will inspire our people to stand up for their lands, their sovereignty, and their identity. As for me, I will try to spend my time wisely each day while avoiding the mistakes of my past. I do not need a new career to start working on my novel for a few hours each day. I have also gotten to know a lot of great people in our community who have proven to be loyal friends. And while I may not have a girlfriend, I will try to pursue a woman with a good personality instead of a woman who only has a good taste in music. But if she ends up liking Wagner and Moonblood, then she would be a real Nibelung treasure.

Siegfried the Dragon Slayer traveled to Worms to marry Kriemhild. Although he was betrayed, his tales have inspired epic poems, operas, and music. While the legends of Siegfried are carved in stone, our fate is not. Once these lockdowns and travel restrictions end, I plan on visiting the Sigurd stones in Sweden, the Siegfried crosses in the UK, and the Nibelungen tower in Worms. Perhaps I will find glory, good friends, and a girlfriend on these adventures.

As a wanderer and a dissident, my journey is not over until the fat lady sings.