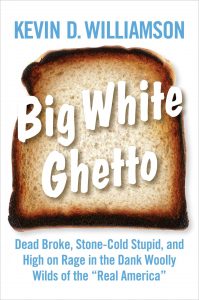 I suppose the author and publisher meant the title Big White Ghetto (etc.) to be eye-catching and amusing, rather like those humorous travels-in-dystopia books that Joe Queenan and P. J. O’Rourke and Bill Bryson were cranking out some years ago. But it’s not really apt for this collection of essays from the last ten or twelve years, most of them originally published in National Review.

There’s little humor and less dystopia. Williamson does do his familiar rounds of down-at-the-heels Appalachia and points west and south, but most of the book is padded out with solemn, in-depth studies of soybean farming, natural-gas fracking, oil refineries, Flat Earth societies, gambling casinos, cannabis in Colorado, murders in Chicago, and Antifa rioters in Portland. As well as takedowns of Bernie Sanders and Donald Trump, two of the author’s bêtes noires.

Not to say Williamson doesn’t try to be funny. But he has a heavy hand, a sour attitude, a tin ear for humor. He points and he sneers, but he forgets to wink. He takes us on an excursion to Atlantic City casinos because he wants to talk about the destructiveness of gambling culture and how the casinos in A.C. are surrounded by teeming black slums. But he mainly expresses his disgust for the vile, ungainly golden-agers he sees around him:

We are the silver horde, and we are descending — on chartered buses, on Chinatown buses, and on the Greyhound “Lucky Streak” express bus we come, on crutches and canes, lapping obesely over the seats of mobility scooters, adjusting oxygen tubes, discreetly nursing Big Gulp cups full of tequila and Pepsi through bendy straws at three in the afternoon, doing serious damage to complimentary troughs of Cheez-Its and Famous Amos cookies. We are getting comped. Free passes to the all-you-can-eat buffet? Whatever. We have our own dedicated train, Amtrak’s Atlantic City Express Service (read: ACES), and we come rolling and thundering down the tracks bearing our Social Security checks, our welfare checks, and quite possibly our rent checks. We are the blue-rinsed, unhinged, diabetic American id on walkers, and we are scratching off lottery tickets the whole way there as we converge from all points on the crime capital of New Jersey — because we are feeling lucky.

That’s the opening of the piece, but he returns to this theme every two or three paragraphs. Disgusting old people on mobility scooters! You can’t flog a dead horse too much.

Such mockery-without-a-moral is the Williamson brand. Perhaps his best-known bit of writing is his early-2016 piece in NR, in which he blames small-town and rural people for their economic woes. Williamson had been having a friendly altercation with his colleague Michael Brendan Dougherty, who had written in The Week about the appeal of Donald Trump for small-town folk, citing an imaginary hard-luck friend in a notional hamlet called Garbutt. Williamson’s self-righteous reply went on for three or four thousand words, ending with the snort: “If you want to live, get out of Garbutt.”

In Big White Ghetto, Williamson amplifies that contempt by relating his own hard-luck story: how he was the illegitimate baby of a teenage mother whom he never met; how he was adopted by a slattern who married four times, sometimes to violent, abusive men who were functionally illiterate. “You know what I learned from all that? Get the fuck out of Garbutt.”

So there! Williamson is still angry, but he wants you to know that his anger is justified. His thinking goes something like: “I was an abused, unappreciated child, living in the wrong part of the country. I can sneer at the white underclass because I’ve been there.” But has he really? His story lacks telling detail, much in the manner of the vague generalizations in J. D. Vance’s Hillbilly Elegy. It’s a narrative long on self-pity, short on insight. The kind of thing you weave yourself as a security blanket when you’re a kid. Today at 47, Williamson uses it as a weapon to defend his snotty and cranky opinions.

Like Vance, Williamson worked hard in 2016 to push the disinformation that Donald Trump’s supporters were mainly poor white trash in hollowed-out counties of Appalachia. Of course, Trump swept most counties in 2016 (and 2020), as well as most white demographic groups. He carried Pigeon Forge and he also carried New Canaan. But Williamson is still pushing that “low-class” innuendo, beginning with this book’s title essay. Apropos of nothing, he suddenly announces that the very poor Owsley County, Kentucky went 83.8 percent for Trump. What he leaves out is the actual headcount: a grand total of 1,474 Trump voters in the second-smallest county in the state.

Incidentally, that gratuitous, meaningless statistic did not appear in the original version of the essay (“The White Ghetto” in NR), for the very simple reason that it was written in 2013, a couple of years before the Trump bogeyman took up residence in the Williamson brain. Williamson’s Trump obsession reminds me of Mister Dick in David Copperfield, forever plagued by unwanted visions of King Charles I’s decapitated head.

Donald Trump pops up in the strangest places, including a truly enjoyable (almost lighthearted) essay called “Death of a Fucking Salesman.” That was what the original cast of the stage play Glengarry Glen Ross called it in 1983, so famously cluttered was it with profanity. But most people know it through the 1992 movie with Al Pacino and Alec Baldwin. Williamson rhapsodizes about those actors, their roles, and their performances. Especially the Baldwin character, who has exactly one scene, but that one scene made him an icon among a certain set of young men. Williamson went to a revival of the play a few years ago. He saw young “finance bros” in the queue, quoting Baldwin’s lines at each other: “Get them to sign on the line which is dotted. Got that, you fucking faggots?”

But here’s the funny thing . . . the Baldwin character wasn’t actually in the stage play! No, David Mamet wrote that scene and character specially for the film, to add star power (Alec Baldwin being very hot just then) and raise production money. So the finance bros watching the play went home disappointed. They didn’t get to hear the magic lines.

Williamson mulls it all over, this cult of alpha-male wannabes who idolize the toughest, meanest guy on the leaderboard. Then suddenly he remembers Donald Trump . . . and his thinking completely short-circuits. The essay struggles on for another page, coughing up lame Trump takes. “For all his gold-plated toilets, he is at heart that middling junior salesman watching Glengarry Glen Ross and thinking to himself: ‘That’s the man I want to be.’”

As the above suggests, Williamson can be quite readable when he wants to be. He just has to stay away from “triggering” subjects that make him lose it. His coverage of the West Texas oil industry and Pennsylvania fracking are the most dispassionate and informative treatments of those subjects I’ve ever read. Like John McPhee of the New Yorker, who specialized in things like 20,000-word articles on the history of wheat, he can maintain the reader’s interest for a long ride through dull territory.

Otherwise, he has a fatal weakness for the glib phrase, the trite factoid, the unfunny joke. The late Sam Francis had “loopy, crackpot, racist ideas,” and so does Trump. (Williamson gets his opinions on Sam Francis third-hand, needless to say.) Writing about the “alt-right” five years ago, he dumbs it all down to the Betsy Woodruff level. For example, this “alt-right” thing has its own “special lingo,” such as “normies.” Richard Spencer is “the slickest and most notorious racist in American public life since David Duke.” (Not since Sam Francis?) Or: “Cathedral” is “a favorite name of the so-called alt-right for the ‘distributed conspiracy’ (in the words of Curtis Yarvin, a.k.a. Mencius Moldbug) that might in less riled-up times be described as ‘polite society’ . . .”

This boy is very confused.

Investigating the chaos and squalor of Black-Run Philadelphia, he opens his article with the snappy line “Philly is famous for two things: cheesesteaks and murder.” Not soft pretzels and the Liberty Bell? Franklin Institute and Betsy Ross House? This is Williamson at his worst, tossing off what he thinks is a witty line that just reveals his shallowness and ignorance. Outside the ethnic enclave of South Philadelphia, cheesesteaks have been around about as long as the World Wide Web. As for “murder,” Philadelphia was the most sedate of cities until racial violence arose in the 1960s and 70s. The crime problem is simply a negro problem, but Williamson prefers to suggest Philadelphia’s decline has to do with tax abatements and empty skyscrapers.

But what can you expect from someone who thinks that cheesesteaks have been around since William Penn?

« Counter-Currents Radio Podcast No. 317 Ask Me Anything with Greg Johnson