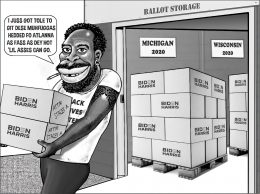 Last I peeked in here, it seemed as if Trump had won the election.

Well, we all know how that turned out.

Although my guts have been screaming at me for a long time that America is way past dead and that demography has already sealed the formerly great nation’s destiny, I confess to feeling a blip of optimism last Tuesday night when it seemed as if he’d win.

What’s still startling, especially considering that we’ve endured enough gaslighting already this year to blind all of us until 1,000 years beyond death, is that anyone is acting like they know for sure what happened last week.

Like Junior Samples of Hee-Haw fame said, “I don’t know nothin’, but I suspect a lot of things.”

As the vote tallies came in, I kept in mind that they still hadn’t counted mail-in ballots. Why things such as mail-in ballots exist is a matter of endless perplexment to me. But I knew Trump’s lead would start to erode once they started counting those.

I will only note that, according to media depictions, most of the people hired to count votes were fat, black, female, and didn’t look as if they knew how to count up to ten. Still, we must endure a media complex that insists that black votes are being suppressed rather than grossly overinflated.

Beyond that, I will allow the rest of the world to argue the finer details about this matter for the next four years at the very least. I don’t think it’s paranoid to suspect that one day soon, even attempting to argue about the election results will result in total social ostracism and possible jail time. Too much rides on the idea of a fair election, and 2020’s results will become another one of those items you can’t touch without getting third-degree burns all over your body, just like that Holocaust thing.

At this point, I don’t even think it’s cuckoo to suggest this was all orchestrated to end in the most purposely divisive way possible. There is no possible happy ending in this scenario. The side who feels like they had the last election stolen from them will taunt the side that feels that way this time around — and that part is a direct analogy at least as far as the endless dreary tedium goes; I’m not attempting to draw an equivalency between the level of election interference in 2016 and 2020, because I wasn’t there to count the votes either time.

There will be no peace. There will be no “healing.” Anyone who thought that Trump was the cause rather than a symptom of America’s irreconcilable divisions is a short-sighted little sparrow indeed.

America will remain the same two countries it’s been for at least the past generation.

To remind myself that America is still two countries rather than the nightmarishly rigid coast-to-coast Iron Rainbow the Democrats seek to power-weld it into, on Thursday I hopped in the car with the missus and drove five hundred miles due south from cold, black, shitty Atlanta to the warm, white, and clean Florida Gulf Coast. We only spent a full day there in between the long hauls back and forth, yet it forced me to reassess my longstanding opinion that Florida is the worst state in the Union.

Sure, there are long stretches of the Sunshine State that are ghastly and tacky and irredeemable. If you hear a story on the news about a naked homeless transient eating someone else’s face while high on bath salts under a freeway overpass, nine times out of ten that story is from Florida. The state suffers from the same cracked-out mania that Southern California does, and my theory for this is due to the fact that so much of it is new and so many of the residents are transplants who are fleeing an awful situation from somewhere else — sort of how I did over the weekend — that it creates a bone-rattling rootlessness.

But there I was, a solid 500 miles from home, with the overwhelming stench of Atlanta’s blackness wafting above a giant cancerous megalopolis with traffic almost as bad as LA’s a full day’s drive behind me, and suddenly it’s sunny, 85 degrees, and there are nothing but Trump signs, squeaky-clean windows, and old Jews who probably can’t even tell that I can tell they’re Jewish.

And yes, if forced to choose at gunpoint, I’d rather spend my dotage amid Heeb geriatrics than among the feral maladaptive dreadlocked blue-gums of Georgia.

So at this moment in November 2020, the country has proved to be more awful than I ever suspected it could be, but Florida turned out to far exceed my dim expectations. You gets your good days, and you gets your bad days.

As far as the official vote count went, Jews and Muslims leaned heavily for Biden, whereas Protestants and Mormons pulled strongly for Trump. Catholics split almost evenly down the middle, and I will leap at any chance to scold Catholics. We are being counseled that Jews will be the key to American unity, just as they’re always the key to social harmony in whatever country they happen to find themselves. America will now enjoy its first-ever “Jewish Second Gentleman” in the form of that doughy nerd who married Kamala Harris.

If there is anything positive to be gained from what happened, or didn’t happen, or what the official line will become on what happened last week, perhaps it’s the recognition that “MAGA” isn’t exactly a political platform in the same sense that “Donald Trump is Satan” isn’t quite a comprehensive strategic agenda, either. Maybe a few people will wake up to the fact that the government does what it wants, it really doesn’t matter who’s president, and most people’s emotions have been played like fiddles? You may call me a dreamer, but I’m alive and John Lennon is dead. Maybe it’s time to finally recalibrate and realize that the attack on whiteness extends far beyond America’s borders, so an America-only strategy is doomed out of the gate.

Maybe it’s time to realize that a president really doesn’t change much and only exists to appease the mob’s primal need for a leader. Maybe it’s time to pluck our heads out of this endless media-generated power-washed spin-cycle where we have no choice in the items they show us.

Otherwise, not much has changed, and if you spot any changes at all, you can rest assured that they will be for the worse. It remains a world where black employees, day in and day out, will still find racial slurs written all over their workplace.

Where teachers can lose their jobs for merely stating the fact that not everyone agrees about the Holocaust.

Where American hate-crime laws backfire because black people can’t bite their lips for five seconds without racially slurring someone.

Where Jews can sue Greeks in Greece for anti-Semitism and win. Let’s see a Greek try to pull off a similar stunt in Israel.

Where “hate speech” is facing criminalization in England, Wales, and Scotland even if uttered in private homes.

Where a female Asian psychiatrist can compare Trump to Hitler — unfavorably — and then backpedal by admitting that it may not exactly be a virtue that Hitler was more competent at killing than Trump could ever hope to be, so she’s truly sorry for any misunderstanding, because in light of his atrocities, it’s never good to say anything good about Hitler.

Every week in America will bring another white person, typically an academic, under the harsh Klieg lights of public scrutiny for desperately trying to pass themselves off as nonwhite.

Remember when people tried to pass themselves off as white? What happened to all that?

It’s still a world where black female medical students, because their skin color and genitalia are obviously more important to them than medicine is, will find a way to honor George Floyd and squeeze in a mess of garbage about “racial injustice and misinformation” into their “New Hippocratic Oath.”

Here’s some REAL racial misinformation for you, the Big Lie from which all others spring: “All men are created equal.”

It’s a world where the entire country burned over the idea that the Minneapolis Police Department was biased against blacks, when the only solid evidence of racial bigotry in the whole squad was a chief of staff’s dismissive comments about “white boys” on the force.

To think this nation can be repaired can only spring up from a hopefulness that is either heroic or pathetic.

The cracks in America’s sidewalks will grow wider. The weeds will sprout high from those cracks. The national death struggle writhes onward. The world will not get better, smarter, or less ridiculous. The only things that have a chance of improving are the jokes.

At least there hasn’t been much post-election violence.