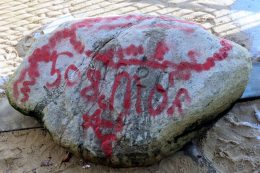 The Pilgrims arrived at Plymouth Rock 400 years ago. Sadly for the occasion, unknown vandals defaced the actual Plymouth rock and other monuments dedicated to the Pilgrims’ arrival.

It’s unclear who’s responsible for this week’s vandalism, but the act itself symbolizes the growing contempt for the settlers. The Pilgrims and other European colonists are no longer heroes — they’re genocidal invaders. They’re not the original Americans — the Indians are. They didn’t found the country — black slaves did.

Some right-wingers may welcome the defenestration of the Pilgrims and Puritans. According to them, everything bad in America originates from these ultra-Calvinists. America’s greed, its opposition to high culture, its “Judeo-Masonic” spirit, and its messianic mission to turn the whole world into a shopping mall all apparently originate with the Puritan founders. The New England settlers earn the dubious distinction of being hated by nearly everyone. Liberals hate the Puritans for their sexual repression and overbearing morality; Leftists hate them for their theft of Indian land. On the Right, Neoreactionaries hate them as the builders of the “Cathedral,” neo-Confederates hate them as perfidious Yankees, Catholic traditionalists hate them as heretics, and the European New Right hates them as the ur-Americans.

You would almost expect Mencius Moldbug to congratulate the Plymouth Rock vandals.

Whatever their faults, the Puritans are unfairly demonized as the culprits of American corruption. Other factors are far more responsible for the poz. The fact that many Puritan critics are Ellis Islanders — whether Jewish or white ethnic — should always be remembered. This criticism is often made to obscure the real sources of corruption and satiate old ethnic resentments. The Puritans weren’t that bad, and many of their descendants were quite based. This is a misguided prejudice the Right needs to retire.

One of the most prominent sources for the Right’s anti-Puritan sentiment is the aforementioned Mencius Moldbug. Moldbug, the pseudonym of Curtis Yarvin, is a popular neoreactionary blogger and tech entrepreneur who receives surprisingly fair coverage from the media. His influence has also spread to mainstream conservatives and libertarians. Moldbug, who is Jewish, offers the Puritans as the archetypal social justice warriors. Whenever you read a commentator complaining about the Left as the New Puritans, there’s a good chance this take is derived from Moldbug.

“We don’t just live in something vaguely like a Puritan theocracy. We live in an actual, genuine, functioning if hardly healthy, 21st-century Puritan theocracy,” he argued in his massive ebook, A Gentle Introduction To Unqualified Reservations.

This theocracy roots out wrongthink and forces the citizenry to follow its religious dogmas. He sees the malignancy of Harvard and other esteemed institutions as the fault of Puritans, not the current occupiers of these institutions. “The political program and perspective that we think of as progressive is, or is at least descended from, the program of a religious sect. Unsurprisingly, this sect, best known as ecumenical mainline Protestantism, is historically the most powerful form of American Christianity,” he writes. In the same work, he approvingly quotes a source claiming that “the Puritan divines were the precursors of the Jacobins and the Bolsheviks.”

He doesn’t argue that modern progressives are actually ultra-Calvinists — just the natural descendants of Calvinists. Many of Moldbug’s writings are concerned with pointing out the WASP figures and institutions that carried this disease to its modern form. Less attention is paid to how these figures and institutions are no longer WASPs. Moldbug, in spite of his value, is prone to advocate for goofy theories. The Puritan thesis may be the silliest.

Of course, he’s not the first to make similar claims. The European New Right shares this contempt for the Puritans. Alain de Benoist said in a Telos interview:

“I detest this puritan heritage [of America], which forbids the normal expression of feelings, turns everything into a “problem” (“What’s your problem?”), reduces daily life to using set formulas for solving these problems (how-to books, programs, etc.) and seems to forbid normal relations between the sexes. Frankly, there is something hysterical in the Prohibition of yesteryear and in today’s campaigns against smoking, sexual harassment, sexual abuses, etc.,”

Francis Parker Yockey also despised the “money-based Puritan culture of WASP America.” Oswald Spengler, his primary influence, saw the Puritan as the descendant of the Viking, a pirate who lacked the honor and dignity of the Prussian knight. He only seeks money.

This Puritan hatred often descends into outright anti-Americanism. It’s not a mystery why. If these were the people who founded America, then the whole country must be diseased.

The real-life Puritans and their descendants rarely satisfy the imaginations of their critics. The old settlers braved an ocean journey to found a new land. The Puritans were more “utopian” and egalitarian than the Cavalier settlers of the Southern colonies. They were also more devoted to spreading the gospel to the Indians and including them in their communities. But their communities were not Judeo-Masonic communes. They created high-trust communities that distinguished sharply between members and non-members. Their democratic structures resembled the tribal ways of the ancient Germans, and the Puritans certainly weren’t liberals. Their efforts to assimilate the Indians failed, leading to King Philip’s War. After the war, the New Englanders saw their communities as limited to their racial kin, not their brothers in Christ.

Their descendants are not bad as their critics make them out to be. Radical abolitionism and feminism originated with dissidents in their communities, not the WASP mainstream. A Boston mob nearly killed the famed abolitionist William Lloyd Garrison in 1835. Many Puritan descendants championed race realism and immigration restrictions in the early 20th century. Lothrop Stoddard and Madison Grant were both of Puritan stock. Stoddard was even a unitarian, the boogeyman faith to Moldbug. The foremost advocate for immigration restriction in the early 20th century was Sen. Henry Cabot Lodge, the very embodiment of WASPdom. Charles Francis Adams Jr., the great-grandson of John Adams and grandson of John Quincy Adams, opposed imperialism on the grounds it would expose America’s racial core to foreign dilution.

There is little in common between these Anglo-Protestants and the modern progressives they supposedly birthed. Why do neoreactionaries see Garrison the archetypal Puritan and not Lodge?

Puritans are not as inspiring or as romantic as the Cavaliers, but the society they built did not create clown world. The reasons for blaming the Puritans for our present mess are numerous.

Many white ethnics still harbor resentment over alleged WASP oppression and can’t get over that America demanded their ancestors speak English. The Puritan thesis satisfies these silly ethnic grudges. Right-wing Jews, such as Moldbug and Paul Gottfried, possibly like the theory because it diverts attention away from Jewish influence to those nefarious Protestants. “Puritan” is an epithet in our society; the flat top-hatted ones are loved by few. They’re an easy scapegoat and far less controversial to blame than Jewish power or non-white immigration. The Puritan thesis makes us blame white Protestants instead of alien forces.

America may not have had the perfect neoreactionary founding, but it is still our country. It’s more valuable to reclaim our history and remember the greatness of our forerunners than to denigrate them. Anti-Puritanism often leads to animosity for the entire Anglo founding stock. Frankly, that’s cringe and a sign of immigrant cope. America wasn’t wrong from the moment the Pilgrims arrived at Plymouth Rock. It went wrong when a new elite who trace their descent to Ellis Island — not Plymouth Rock or Jamestown — took power.

P.S. For readers who would like to see the Puritan theory debunked, I highly recommend reading through the archives of the “racehist” blog. WASP America has never had a more dedicated defender than this anonymous blog author. This blog is sadly no longer updated, but it remains a valuable source for the Dissident Right.