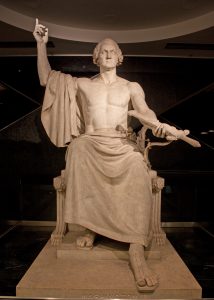 And that nationalism leaves no room for our classical heritage.

Counter-Currents readers are probably familiar with Hazony, his book The Virtue of Nationalism, and his “National Conservatism” conferences. Greg Johnson’s recent series on Hazony’s book is recommended (parts one, two, three, and four).

This essay covers another aspect of the Israeli political theorist: his emphasis on Jewish scripture as the root of the West and the source for “authentic” nationalism. Hazony curiously ignores the West’s classical heritage and is hostile towards Rome (both the ancient state and the Church) and Germany. In Hazony’s imagination, everything good in the West flows from Judea and the Protestant Reformation.

There are commendable aspects about Hazony’s thought, but its main goal is to impose a kosher nationalism on Europe and America. Those who violate Hazony’s framework are cast out to the dark abyss of “racialism,” which is apparently very different from nationalism.

Throughout his writings, Hazony makes it clear that the Talmud and Torah are far more important to the West than any Greek. In The Virtue of Nationalism, Greco-Roman antiquity only earns three semi-positive mentions: he notes that Greek political philosophy paid close attention to the ideal state, cites Athens as an exemplary free state, and mentions that Polybius praised the Maccabees for their unified national state. Hazony criticizes the Greeks for their inability to form a nation and sees the Romans as sinister imperialists. Apparently, neither ancient people offers any positive value to nationalists . . . unlike the Hebrews.

The Old Testament invented the good nation-state that sought only to rule itself and not conquer its neighbors. That’s a strange claim considering the Bible calls the Hebrews God’s chosen people, a claim to superiority that belies Hazony’s arguments. Hazony argues that Europe rediscovered the virtue of nationalism with the Protestant Reformation and its emphasis on the Old Testament. The Israeli sees England and the Netherlands as his model nations due to their appreciation for Hebrew scripture. The Holy Roman Empire is the great evil and Hazony argues its imperialist vision inspired Hitler’s evil.

The book is profoundly anti-Catholic and anti-German. The Roman Church is an imperialist institution that doesn’t pay enough respect to the Hebrew Scripture. Germans, according to Hazony, “never cultivated an Old Testament conception of themselves as an independent national state, as the English, the Dutch, and the Americans did.” Catholics can only be good nationalists if they afford the Torah its proper stature; Hazony seems to think Germans can never be good nationalists.

Even though Hazony wants Westerners to pick up the Bible, he barely hides his animosity toward Christianity. The worst form of imperalist hate is Christian anti-semitism. The New Testament has an imperialist message. Only the Old Testament, which is shared with Jews, can make Christians good.

The main purpose of Hazony’s book is to make westerners support Israel. He states that Israel is his first concern and dedicates large portions of the book to the Jewish state’s plight. His goal is made easier when he argues that the Torah provides the only basis for solid nationalism.

Haivry and Hazony aim to separate conservatives from John Locke and offer an alternative lineage for the American founding. They find it in a strain of obscure English political theory influenced by Jewish texts. According to the writers, what makes the Anglo-American heritage unique is its “powerful ongoing identification with Hebrew Scripture.”

Here is their ideal form of nationalism:

The Anglo-American tradition harkens back to principles of a free and just national state, charting its own course without foreign interference, whose origin is in the Bible. These include a conception of the nation as arising out of diverse tribes, its unity anchored in common traditional law and religion. Such nationalism is not based on race, embracing new members who declare that “your people is my people, and your God is my God” (Ruth 1:16).

Your nationalism must follow the Old Testament to earn their approval.

Haivry and Hazony lionize John Selden, a largely forgotten English philosopher of the 17th century, as one of the founders of conservatism. It’s not hard to see why–Selden was a scholar of Jewish law who relied heavily on Hebrew texts to support his arguments. Haivry and Hazony love that Selden offered the Talmud as the best source for natural law.

In his Natural and National Law, Selden explains that this natural law has been discovered over long generations since the biblical times and has come down to us in various versions. Of these, the most reliable is that of the Talmud, which describes the seven laws of the children of Noah prohibiting murder, theft, sexual perversity, cruelty to beasts, idolatry and defaming God, and requiring courts of law to enforce justice. The experience of thousands of years has taught us that these laws frame the peace and prosperity that is the end of all nations, and that they are the unseen root from which the diverse laws of all the nations ultimately derive.

While Selden and other obscure English writers receive much attention in this essay, the Greeks and Romans are ignored entirely. This is odd since the republican tradition–the usual alternative theory to America’s Lockean founding–owed far more to classical sources than the Old Testament. Yet, that tradition is given short shrift to Haivry and Hazony’s Talmudic republicanism.

In a 2012 First Things article, Hazony argued that republican forms of government comes from the Old Testament, not the Greeks. “The Hebrew Bible can be seen as going further in the direction of endorsing democratic principles than any of the classical texts of Greek philosophy,” he writes.

Curiously, he positively cites the Bible’s similarity to the thought of Locke and Hobbes, two thinkers he now denounces. The 2012 article was written in the Tea Party era and championed limited government. Back then, Hazony needed to make sure libertarianism stayed kosher; now he’s focused on nationalism.

Hazony made it clear where nationalism comes from at the 2019 National Conservatism Conference, as Harper’s writer Thomas Meaney reported:

Launching out against a hundred years of historiography, Hazony claimed that, no, nationalism was not about forgetting things in common or sharing a mistaken view of the past; it was about keeping a covenant with God. For Hazony—founder of the Princeton Tory, onetime confidant of Netanyahu, and chief Talmudist of National Conservatism—nationalism began with the Hebrews. Donald Trump might speak in slogans, but he was also speaking the Torah. The Hebrew God “doesn’t say go out and conquer all the nations of the world. He says, You stay behind your border.” You can have this patch of land for your people, and it will become great; other peoples can do the same on their patches. And so, after a break of a few thousand years, the Dutch, the English, and finally the Americans all copied the original.

While Hazony ignores the West’s classical heritage, he isn’t shy about expressing his hatred for all things German. He loves to point out that the Holy Roman Empire was German, the worst Enlightenment thinkers (such as Kant) were German, and the European Union is too German-dominated. He particularly hates German intellectuals.

Much of Hazony’s thought resembles Carl Schmitt’s ideas. For instance, Hazony criticizes universalists for their inability to tolerate the particular and desire to wipe out all opposition to its claims to represent all of humanity. This is similar to Schmitt’s critique of a world state that would seek to exterminate the particular as the enemy of humanity. Both Hazony and Schmitt are critics of liberalism.

However, Hazony wants no one to read Schmitt because he deems Schmitt (and Martin Heidegger) irredeemable Nazis.

Spare me your rationalizations about how Heidegger and Schmitt were not exactly what you consider a Nazi. They were members of the Nazi party. They held public functions in Nazi Germany. Their philosophies create the intellectual space in which Nazism can supposedly “make sense.”

Instead of these incisive anti-liberals, the Israeli scholar wants us to read his approved “Counter-Enlightenment” thinkers. In a PragerU video, Hazony offered Selden, David Hume, Adam Smith, and Edmund Burke as his imposing list of Enlightenment critics. Hume and Smith are Enlightenment thinkers and Selden wrote before the Enlightenment. Hazony makes no mention of Joseph de Maistre, Vico, Nietzsche, Schmitt or any continental European. The Counter-Enlightenment becomes a purely Anglo phenomenon that owes most of its ideas to Hebrew scripture. (Hazony does quote Herder in The Virtue of Nationalism.)

Hazony’s book offers some sound arguments for nationalism and his popularity demonstrates the growing power of Dissident Right ideas. Hazony knows the future favors nationalism and wants to occupy the driver’s seat. Ultimately, Hazony should not be trusted. His main goal is to make himself the intellectual guru of western nationalism and expunge all elements who don’t accept his Anglo-Hebraic framework.

The most important thing to remember is that Hazony’s main concern is with Israel, not America or Europe. His worldview is fundamentally different from ours.