Why Can’t We Have Nice Things? 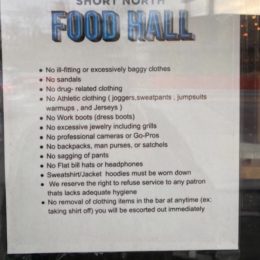 Short North Food Hall, a bar in a trendy part of Columbus, Ohio, not too far from The Ohio State University campus, has come under fire for posting what appears to be a hastily drawn-up dress code. It read as follows:

The image of the printed out sign on the bar window went viral nearly immediately on social media, with the typical outrage you might expect from professional victims and the diversity & inclusion industry. There were calls for boycotts of the bar, along with all of their sister locations owned by the same group. Other local bars were posting their own “dress codes” mocking those at Food Hall, saying things like “please wear jerseys and sandals here.” Food Hall received thousands of comments on social media, along with people leaving them negative reviews.

One comment I saw numerous times under news about the dress code was “sounds about white.”

“I said last week I was very disappointed that in 2020 that these kinds of occurrences actually happen,” said Stephanie Hightower, President and CEO of the Columbus Urban League.

“When they said no baggy clothes or grills, I thought that was racist,” said Kennedy Hairston.

The bar owner, the NAACP, the Columbus Urban League, and other groups held a meeting to educate the owner on his “mistakes.” A meeting to which the owner attended without protest.

Immediately following the online outrage campaign, Food Hall released an apology and said the dress code was only meant to increase the safety of patrons and staff. This, of course, was not nearly good enough.

I emailed the bar owners asking what prompted the dress code. While others online speculated it was pure “racism and bigotry,” I speculated otherwise. In my email, I said I assumed some prompting incidents led to the sign being posted. I never received a reply. However, I did get my answer in a press release that soon followed.

Bar owners said the dress code was in response to near-constant complaints of cell phones being stolen, people being drugged, sexually harassed, assaulted, and more at the bar. What was being framed as pure and irrational bigotry, was, in reality, a response to protect patrons who have been victimized for over a year. When bar staff and police asked victims for descriptions of their assailant, I’m sure they described people wearing exactly what was being prohibited by the dress code many times.

The formal press release also included lip-service to diversity and how it’s our greatest strength, and now, Food Hall employees will be “trained” on diversity and inclusion.

The Short North neighborhood is an interesting place. It’s been “gentrified” over time, meaning made far more pleasant. The clientele is a mix of Ohio State students and graduates, local professionals, bohemian art types, and more urban types due to surrounding neighborhoods. I’ve been to every bar, gallery, and restaurant on High Street during my time at Ohio State. I can tell you from personal experience I noticed many interesting interactions between these various crowds. On many nights, I thought to myself, or shared with friends, that this looked like a predator and prey scenario.

I’ve been to Food Hall several times, and witnessed some of these interactions and fights, and on nearly every occasion the instigator of the unpleasant or illegal interaction was wearing something the Food Hall dress code prohibited. To be clear, this wasn’t just about clothes, but about who usually wears them and their behaviors. We all know what the clothes were an ultimate proxy for, a fact many in the community took great issue with; not with the abhorrent and illegal behavior, but with people noticing. Although women were being harassed, drugged, robbed, and assaulted, the greater crime to the outrage community was noticing who was doing it.

To summarize here, a bar noticed their patrons being sexually harassed and assaulted, drugged, attacked, and having their items stolen. In response, they put up a “dress code” meant to keep the predators out of the bar based on victim descriptions, and now they have to pay a local diversity company money to be trained on how to not be so bigoted. “Hey, you can’t notice that!”

I found this small example of crime and diversity in a bar to be a perfect microcosm for the Occident as a whole. Crime and unpleasantness was being brought about by a particular demographic, and a response to make things better was made: This time, in the form of a dress code — historically, in the form of laws or immigration changes — and the reaction was that the effort to make things better was irrational, fueled by hatred, with no actual basis or genesis, and was therefore morally questionable. Then, in the aftermath, instead of doubling down and saying “no, we had an issue, and we must deal with it,” the people who were in the right chose to kiss the ring.

Demographic shifts in cities have caused thousands of businesses to close and malls to become vacant. Whether recognized explicitly or not, it is a fact that many business owners must confront at some point. Any attempts at a remedy are being met with resistance, which is why we must push back and replace the narrative and hegemony. What happened at Food Hall has happened time and time again. Criminal behavior destroys social capital and forces good patrons to find another place. Then the criminal elements, being the parasites they are, follow the good clientele to the new location, rinse and repeat, until your society is destroyed. I understand this is a hard position to be in for a local business. Caught between Scylla and Charybdis, they either cede to the mob and end the social media shoah, or try to maintain the quality of their establishment. I hope they somehow navigate in between.

There have been many examples of this exact scenario unfolding, perhaps on a small scale like in the case of one business, perhaps across a state, or in national law. The important lesson here and what we must remember is that there is nothing illegitimate about taking your own side. If you’re a bar and you have a demographic that is degrading the quality of your establishment, kick them out. If you’re a nation that is having the same issues on a more grand scale, also kick them out. You owe them nothing. You do not owe them your bar and you certainly don’t owe them your homeland. Yes, they will cry and scream and try to “cancel” you, but remember, that’s what they are doing anywhere, whether you act or not.

There is a pervasive idea in society that anytime a person acts in a way that looks at a group as a whole they are somehow morally illegitimate. Suppose you are that bar owner and the descriptions you’ve been getting for a year about thieves, rapists, and those starting fights are all the same. What do you do? Does this mean every single person who has come into the bar wearing baggy clothing or grills was one of the criminals? No, it doesn’t. And the new dress code might exclude a few of the law-abiding people who happen to like that type of “fashion.” And that’s okay. When the whole group is evaluated at on the whole, and they overall constitute a net negative for your establishment (or state or nation), you can make a legitimate policy choice to exclude them. Indeed, you must do so, otherwise you’ll be sacrificing the well-being of those you intended to serve and your own interests in favor of those who will lead you to ruin.

[1] By “work boots” they meant Timberlands.

« In Defense of Mishima