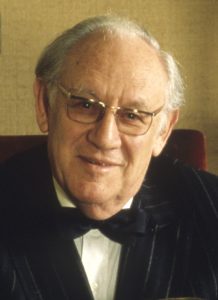 Arthur Sackler, who brought you the “very white” oxycodone epidemic.

White America is reeling as the holocaust of opioid addiction takes its toll. Hundreds of thousands of whites have lost their lives to this epidemic – more than the United States lost in the Second World War. Indeed, each year’s deaths is roughly the equivalent of the number of Americans who were killed during the entirety of the Vietnam War. White male life expectancy has fallen for the third consecutive yea; drug overdoses and suicides are almost solely responsible for this trend.

All of this evinces a profound despair at the heart of our people, a general loss of our will to live. Indeed, there is a black hole at the center of our nation, devouring us from within. What else are we to expect when we are forbidden to express our identity through any medium other than black football teams and penitential self-flagellation? We, the descendants of the Scots-Irish and Anglo-Saxon settlers who tamed the wilderness and conquered a continent, appear to be following the pitiful path of the Amerindians we subdued: becoming a defeated people clinging onto bottles and injecting death into their veins, going from John Gast’s American Progress to the world of Falling Down, Donnybrook, and Requiem for a Dream.

This slow-motion suicide might, however, be something more akin to genocide. As we replaced the Amerindians (who may or may not be “native” North Americans), a rising tide of color is currently in the process of replacing us in what is surely one of the swiftest demographic transformations in human history. The barbarians are already inside the gates, dismantling our civilization from within. The opioid crisis itself is an open act of war by the Chinese government. State-supported fentanyl manufacturers collude with Mexican cartels and the narco-state apparatus to massacre as many white Americans as possible. Purdue Pharma’s Jewish Sackler family o proudly sneered at the OxyContin launch party that “the prescription blizzard will be so deep, dense, and white.” Our successors strive to strip us of our means for self-defense, just as the Amerindians were disarmed. The true target of “gun control” activism is clear: “Assault rifles” in white rural communities are being targeted, while illegal handguns go unchallenged in black urban hellscapes. So-called “red flag” laws target whites on the Right, yet gang databases remain off-limits. Whites are not to be permitted our identity or even security.

As the opioid epidemic sweeps through the realm, claiming more victims than the crack epidemic of the 1980s, our government’s response has been wholly different. When blacks were the victims, the machinery of the state shifted into action through national propaganda campaigns and a near-universal tightening of drug laws, successfully stemming the crisis and reversing crime statistics nationwide. Journalists and media celebrities ensured that alarmist coverage was total. And yet blacks continue to believe in conspiracy theories which hold that the “white supremacist” United States government propagated the crack epidemic.

By contrast, though there has been a great deal of reporting on the opioid crisis, and despite the fact that several major Republican politicians (including President Trump) have made the right noises and taken cursory action in response to it, the needle has barely shifted. Television coverage remains slight. Many journalists revel in this debasement of the white race, crying crocodile tears as they tell us that this is our comeuppance.

Worst of all, the bipartisan political establishment seems obsessed with throwing open the prison gates to minority votes. The combination of the Trump administration’s First Step Act, state legislation like Oklahoma’s State Question 780, California’s Proposition 47, and the actions of Soros-funded Leftist prosecutors like Kim Foxx, Larry Krasner, John Creuzot, and the terrorist progeny Chesa Boudin have created a perfect storm in which black and brown drug dealers are treated with eggshell leniency. While criminals walk free in the midst of the greatest drug crisis in our history, the Department of Justice pursues white advocates with ceaseless vigor. In such a world, where illegal alien criminals run amok while whites are harassed for the most minor of infractions, can we be blamed if we ask why we continue to pay taxes?

There are examples galore which reveal the state’s actual priorities, and not only in America. The French government, having lost control of the Paris banlieues, strictly enforces its rule that passengers must not put their feet up on empty seats aboard regional trains. Sweden, suffering from rampant street crime, silences dissenting journalists. The British government, under siege by knifings and unable to pursue justice for schoolgirl rape victims, sentences Kevin Crehan to an effective death sentence for placing bacon on the steps of a mosque. For its part, the German government declares that teenage rape victims were asking for it.

Here at home, the American government vigorously pursues Donald Trump for fraudulent claims about Russian and Ukrainian “collusion” and “bribery,” while no one discusses the fact that court filings have revealed Representative Ilhan Omar to be a Qatari agent. And while the corrupt Elijah Cummings lies in state in the Capitol, Steve Stockman languishes in prison on spurious campaign finance charges.

Senator Kirsten Gillibrand lectured drug-ravaged Ohioans about their white privilege. Indeed, we sold our melanin for this privilege.