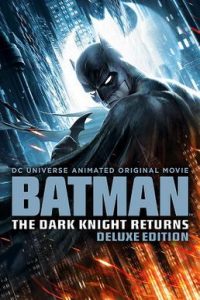 Batman: The Dark Knight Returns is an animated movie adaptation of Frank Miller’s graphic novel The Dark Knight Returns. Released in two 76-minute parts in 2012 and 2013, then combined into a 148-minute edition DVD and Blu-ray, this is lame, sclerotic, constipated, Z-grade animation drawn out to paralyzing lengths, completely lacking the visual style and dynamism of the original graphic novel, which is more animated on the printed page than in this adaptation.

Why review it, then? The original graphic novel seems quite paradoxical. The characters of Batman and Commissioner Gordon are highly Right-wing, truly off-the-charts on the F-scale. But this is counter-balanced by a number of features that can only be described as politically correct: anti-racist, anti-sexist, and anti-homophobic. What ties these two dimensions together is Miller’s Right-wing individualism. His Rightist values are universal principles that can be followed by anyone, regardless of race, sex, etc., and it is only permissible to go outside the law in service of these values. The film, although it mostly detracts from the graphic novel, also adds a few touches that heighten its Right-wing dimensions.

After the death of Jason Todd (the second Robin), Bruce Wayne retired from the role of Batman at the age of 45. Ten years later, Gotham is at the mercy of the Mutant gang (which is, ludicrously, all-white and practically all-blond, as are practically all the other criminals in Gotham). Commissioner Gordon is 70 and on the brink of retirement. The Joker is catatonic in Arkham Asylum. Harvey Dent/Two-Face receives reconstructive surgery courtesy of Bruce Wayne. Dent is declared sane, released from Arkham, and promptly drops out of sight and returns to crime.

Bored with retirement and appalled by the crime wave, the 55-year-old Bruce Wayne dons cape and cowl and returns to fighting crime. On one of his patrols, Batman rescues teenage girl Carrie Kelley from the Mutants. Kelley then buys a Robin costume and goes into crime fighting, eventually winning the trust of Batman. Kelley’s character is an obvious concession to feminism, and with her short hair and tomboyish demeanor, to lesbianism as well.

Batman eventually defeats Two-Face and the leader of the Mutants. Some former Mutant gang members rename themselves the Sons of Batman and become vigilantes. This disturbs President Ronald Reagan—portrayed as a sinister, greenish Frankenstein monster—who asks Superman to step in and stop Batman. Superman threatens Bruce Wayne, telling him to go back into retirement, then zooms off to Corto Maltese to fight the Soviets. Commissioner Gordon retires, and his replacement Ellen Yindel (feminist, lesbian, and very probably Jewish) issues a warrant for Batman’s arrest.

Meanwhile, Batman’s return has awakened the Joker from his catatonic state. Psychiatrist Bartholomew Wolper, who previously certified Harvey Dent sane and has publicly argued that Batman is actually guiltier than the criminals he fights, now champions the Joker, declaring that he had been cured and should be reintegrated into society. Wolper reintroduces the Joker to the world on a late-night talk show, but it does not go as planned. The Joker slashes Wolper’s throat on live TV, then gasses the entire audience to death and escapes.

Batman tracks the Joker to an amusement park and beats him within an inch of his life. Batman knows that he could have prevented every murder committed by the Joker since his release if he only had the strength to kill him years before. But even now, Batman cannot bring himself to simply execute the Joker. Instead, he plans to turn him over to the system that had just let him out to kill again. But the Joker does the right thing for the wrong reason. Out of sheer spite, he snaps his own neck, knowing that Batman will be accused of his murder. Batman, however, makes a narrow escape.

The Corto Maltese war escalates into a Soviet nuclear strike. Superman deflects a nuclear missile to a deserted place, but the detonation causes an electro-magnetic pulse that shuts down all electronic equipment, plunging America into chaos. Batman rallies the Sons of Batman to restore order to Gotham, making it the safest place in the nation. Reagan is embarrassed by this and orders Superman to stop Batman.

Batman and Superman then square off. Batman is strengthened by a mechanical exo-suit, and Superman is weakened by the nuclear blast and a kryptonite-tipped arrow, leading to Batman’s victory. (All this is reworked in Zack Snyder’s Batman v Superman.) Batman then dies of a heart attack, Alfred Pennyworth dies of a stroke, Wayne Manor is destroyed, and Batman is revealed to be Bruce Wayne. In the epilogue, however, we discover that Batman/Wayne faked his death and plans to carry on his crusade against crime in secret.

The portrayals of Wolper and the Joker are the most politically incorrect aspects of the movie, pushing it almost into Alt-Right territory. Wolper is a Jewish name, and he is drawn with a big nose and a black Jew-fro. In the movie, this impression is driven home by voicing him as a smarmy, liberal New York Jew. As for the Joker, he is voiced as a snarky, sibilant, effeminate homosexual.

The most substantive Right-wing elements in the film were already present in the graphic novel, of course, but seeing them on the screen had much more impact.

First, when Jason Todd’s death is mentioned, the expectation is that Batman/Bruce Wayne will affirm the bourgeois assumption that nothing is worse than the violent death of a young man. But Wayne rejects this assumption at root, saying that Jason was “a soldier.” Wayne’s unspoken assumption is that it is appropriate for soldiers to give their lives for a cause, because there are some values higher than the preservation of individual life.

Second, when the retired Commissioner Gordon meets with his successor Ellen Yindel, he makes an extraordinary case for going outside the law for reasons of state, to pursue a higher good. He recounts how the Japanese attack on Pearl Harbor shocked Americans into entering World War II and recounts how it was later revealed that Roosevelt knew the attack was coming and did nothing to stop it, precisely to get the United States into the war. Many innocent men died, but Gordon clearly believes that Roosevelt did the right thing, even though he is not willing to come out and say it. Instead, he says that he could not judge it, because “It was too big. He was too big.” Yindel only sees the relevance to Batman later, when she gives up her pursuit of him because “He’s too big.”

Of course, Roosevelt’s ploy to get the United States to bleed for Jewry in another World War became the template for the conspiracy to get the United States to go to war with Israel’s enemies in the Middle East. This, coupled with Miller’s politically correct views of race and sex, gives The Dark Knight Returns a distinctly neoconservative ideological flavor: a marriage of liberal-democratic and globalist values with Schmittian political realism. But this is consistent with the larger superhero genre, in which Nietzschean Supermen, or just plain Supermen, always work to promote egalitarian humanism.

It’s time for Batman to shrug.

« Call for Help
A Francis Parker Yockey Quote from Union #1