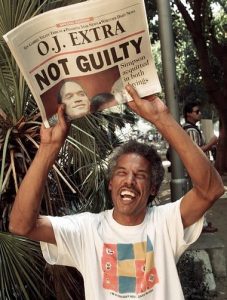 Recently, FOX aired a program entitled “O. J. Simpson: the Lost Confession.” The program showed clips from a 2006 interview where O. J. Simpson talks “hypothetically” about murdering his wife Nicole Simpson and Ronald Goldman. The interview was originally intended to promote Simpson’s book If I Did It, his clumsy attempt to profit from his crimes without technically admitting to them. In between clips, FOX had assembled a panel of experts who offer horrified reactions to O. J.’s blunt confessions.

One thing you couldn’t help noticing was that O. J. Simpson’s guilt is never questioned. The program assumed O. J. Simpson was guilty and assumed everyone watching agreed. You would never guess from watching FOX’s program that this was not always the case.

It may be difficult for people too young to remember the O. J. Simpson trial to understand what it meant to people at the time.

The O. J. Simpson trial is probably for millennials what Watergate was for my generation. Being Generation X, I was too young for Watergate, and the Watergate break-in itself seems like small potatoes to me because I’ve grown up in a world government corruption and intrusion have become normal. So it’s difficult, if not impossible, for me to put myself in the shoes of someone in the 1970s hearing about that kind of government malfeasance for the first time.

Likewise, millennials have grown up in a much more racially-charged environment. They’ve seen several high-profile race trials like those surrounding the deaths Trayvon Martin and Mike Brown. It is commonplace for POC’s to openly celebrate the demise of whites and wax poetic about their intense hatred of whites. One of the purposes of this article is to let younger readers know why the O. J. Simpson trial was such a big deal.

O. J. Simpson murdered his wife and her friend Ronald Goldman on June 13, 1994. He was acquitted for that murder on October 3, 1995. What happened in between was an all-consuming social/cultural/media phenomenon unlike anything I’ve seen in my lifetime. Even if you weren’t trying to follow the story, you still knew what was going on because it was all anyone was talking about.
The O. J. Simpson trial was a forerunner to the recent “cop shoots black kid” trials. There was heavy press coverage, accusations of police racism, and public opinion on the matter split along racial lines.

But the difference between the O. J. Simpson trial and more recent racial trials, is that there was no ambiguity. The evidence against Simpson was overwhelming: he had the blood of the victims in his car, on his clothes, and at his house. The case did not need to rely on he said/she said witness testimony or circumstantial evidence. The evidence was right there.

But what was mind-boggling for white Americans is how immune to evidence black Americans can be. The same New York Times article reported “The trial has had little effect on the public’s perception of Mr. Simpson’s guilt or innocence. In a Gallup Poll taken in July 1994, 62 percent of the adult Americans surveyed said the charges against Mr. Simpson were probably true and 21 percent said they were probably not true. In the recent CBS poll, 57 percent of those surveyed said Mr. Simpson was probably guilty and 18 percent said he probably not.” In other words, the more evidence of O. J. Simpson’s guilt blacks saw, the more convinced they became of his innocence.

Another interesting quirk is blacks’ warped idea of fairness. Before the verdict was announced and smart money was on O. J. going to jail, only 45% of blacks polled believed that O. J. had received a fair trial. This number would jump up to 80% a couple days later after O. J. was acquitted. To blacks, “fair” is whatever benefits them.

Racial politics in the 1990s were not the all-consuming obsession that they are today, but there were three big stories in the ’90s with heavy racial overtones: the Rodney King video and the subsequent LA Riots, the emergence of rap music and hip hop culture, and the O. J. Simpson trial. Of the those three, the O. J. trial was probably the least consequential but also the most redpilling.

I could understand why the intense images of the Rodney King video might provoke emotional or violent responses, and one could make a case that rap music was escapist fun. But for the life of me, I could not comprehend celebrating an obviously guilty man walking free.

For videos of blacks responding to the O. J. Simpson verdict, click here, here, or here.

Black America’s unwavering devotion to an obvious murderer was something the liberal narrative could not explain. There were only two possible explanations for this phenomenon, and both scared white people to the core: either blacks were dumb, or blacks were liars.

Either blacks honestly and genuinely believed that O. J. Simpson was innocent and/or being framed for the murder of his wife as part of a racist police conspiracy, in which case they were dumb. Or blacks secretly knew O. J. was guilty but professed a belief in his innocence out of tribal solidarity. If that were the case, that would make blacks liars. Try to think of another explanation that does require blacks being one of those two things. You can’t do it.

The behavior of black Americans at this time went against everything we were led to believe about race. Mine generation was assigned To Kill a Mockingbird in school. It was a story about how tribalistic white jurors unfairly used the court system to protect their racial kin and attack the racial other and did so in the face of mountains of evidence to the contrary. White people who read the book were supposed to walk away thinking those jurors were the most evil people in the world.

So when the O. J. Simpson trial turned out to be To Kill a Mockingbird in reverse, what was white America supposed to think while watching our black countrymen in jumping around in jubilant ecstasy over a gross perversion of justice? Are we supposed to hate them too? But that would make us racist!
And what did it say about the future? As we are heading into a future in which whites will be a minority, we will be increasingly dependent on non-whites to treat us fairly. Was the O. J. Simpson verdict an omen of what to expect?

But as time has gone by, that lesson has faded from the public consciousness. Recent polls have shown that a majority of blacks now believe O. J. was guilty (although an astonishing 40% of blacks still maintain O. J.’s innocence). Nowadays people are more likely to remember the O. J. affair as simply a major tabloid story with some racial overtones.

There was a period in the late ’90s when O. J. Simpson was the JFK on Generation X. While our parents all remember where they were when JFK was shot, everyone in Gen X remembers where they were when they heard the O. J. Simpson verdict. It was a moment of mass cognitive dissonance for white people, and everyone remembers what it felt like the moment they found out that black people hate us.