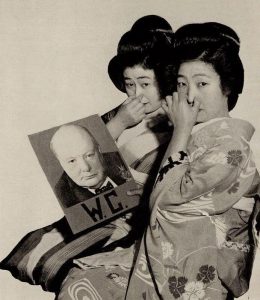 Darkest Hour is the second film released this year on Churchill and the latest in an ever-growing list of Churchill-related films and television shows (around two dozen over the past decade). Like its predecessors, Darkest Hour rehashes treacly warmed-over clichés about its subject and glosses over the sordid truth about this murderous psychopath.

Jews in the film industry love Churchill because he serves as a real-life example of the “superhero who saves the world from Nazi villains” trope and furthermore represents a brand of faux patriotism that plays to patriotic instinct without posing a threat to Jewish hegemony. For all his gung-ho patriotic oratory, Churchill was ultimately beholden to Jewish interests rather than to the British people.

Thus following the release of Christopher Nolan’s Dunkirk this past July, Jews naturally lamented that the film wrenched the spotlight away from Churchill’s crusade against Germany. Dunkirk instead focused on actual Englishmen and their comradeship, courage, and heroism, which lent it genuine emotional power. Darkest Hour strains to deliver the emotional impact of Dunkirk, but its attempts to pull at the viewer’s heartstrings are forced and phony.

The film begins on May 9, 1940 and ends with the evacuation of Dunkirk. It opens amid chaos in the House of Commons, where members of Parliament are demanding that Neville Chamberlain resign. The inefficacy of the Allied campaign in Norway had cemented increasing dissatisfaction with Chamberlain’s government. His government narrowly survived a motion of no confidence; a fourth of his own party had voted against him. Chamberlain resigned on May 10, 1940, the day that Germany invaded France and the Low Countries.

Viscount Halifax was Chamberlain’s favored successor but turned down the post and remained Foreign Secretary, serving as a member of Churchill’s War Cabinet. He and Churchill frequently clashed, which the film highlights. Much of the film is set in the Cabinet War Rooms, an underground bunker where Cabinet meetings took place. During one meeting in late May, Halifax proposes the idea of negotiating peace settlements with Mussolini. Churchill (Gary Oldman) explodes with rage at the very mention of peace.

Hitler himself attempted to make peace with Churchill a number of times. Pat Buchanan argues convincingly in Churchill, Hitler and the Unnecessary War that had Churchill accepted Hitler’s peace offers to Britain in the summer of 1940, the catastrophic destruction that was to follow could have been averted. (Hitler had made similar propositions throughout the 1930s that were for the most part ignored.) Yet Churchill made it clear that he was hell-bent on war.

The film casts Churchill’s pigheaded warmongering in a glowing light. The sole voice of reason is Halifax (Chamberlain is relegated to a smaller role), who at one point thunders at him: “I will not allow another generation of young men to die at the bloody altar of your hubris!” But this is effectively what happened, amounting to one of the greatest tragedies of human history. Hundreds of thousands of young men were sacrificed at Churchill’s hand.

The primary victims of Churchill’s bloodlust, though, were German civilians. The English ruthlessly bombed Germany throughout the war, causing the deaths of around a half a million Germans (this was not just collateral damage incurred by strategic bombing; often civilians were intentionally targeted). Churchill also oversaw the postwar expulsion of around 12 million ethnic Germans from Eastern and Central Europe, which resulted in up to two million deaths.

Churchill was essentially an old-fashioned British imperialist. He thought little of Indians and was responsible for the Bengali famine of 1943-44, in which around two million died of starvation and disease. Prior to the Second World War, he defended British-run concentration camps in South Africa, where 27,000 Boers died. He also contributed to the suppression of revolts in Iraq in the early 1920s, which lead to about 10,000 deaths; the modern Iraqi-Kurdish conflict traces its origins to this.

Darkest Hour attempts to give this bloodthirsty maniac a human face. Oldman’s Churchill is a charming albeit irascible eccentric who loves his wife and takes daily afternoon naps. The emphasis on Churchill’s private life is meant to endear him to the modern viewer, but the excessive familiarity is off-putting. For instance, while Churchill delivers his “blood, toil, tears, and sweat” speech to the House of Commons, the camera flits back and forth between the oration and his initial dictation of the speech to his secretary (who figures prominently throughout the film), featuring a shot in which he has just emerged from the bathtub and announces that he is unclothed. Mercifully the viewer is spared this sight. There are also a number of sappy scenes between him and his wife. Then the title cards at the end of the film obnoxiously refer to Churchill with the familiar “Winston.”

The proud stiff-upper-lip dignity that the British people exhibited during the war is almost absent from Darkest Hour. The film lapses into trite sentimentality with grating regularity. The most corny scene occurs toward the end when Churchill decides to ride the Tube instead of traveling by private car in a farcical display of faux populism. As his fellow passengers gaze at him in awe, Churchill humbly inquires of them what they think about the war and what they would think about making peace terms with Hitler. They collectively shout, “Fight!” and “Fight the fascists!” Churchill then begins quoting Thomas Babington Macaulay’s rousing Horatius from the Lays of Ancient Rome, and a black man beside him completes the stanza in his West Indian accent. Churchill is moved to tears and snivels into his handkerchief. Try not to vomit.

This scene, and the film in general, will strike a chord with mainstream white conservatives, who happen to constitute the majority of Churchill worshipers (the audience at the theatre was all white and by my reckoning I was the only audience member under the age of 60). It’s every conservative’s wet dream. But what mainstream white conservatives fail to realize is that no amount of conservative concessions to left-wing demands (e.g., attempts to sanitize historical figures like Churchill or the Founding Fathers for modern multicultural audiences) will satisfy the rising generation of young non-white extremists, who will not be content until white civilization is overturned entirely.

The film concludes with Churchill’s famous “We shall fight on the beaches” speech. A line from W. B. Yeats’s poem “The Second Coming” springs to mind: “The best lack all conviction, while the worst / Are filled with passionate intensity.”

« Charles Manson:
From Scapegoat to Messiah

Magical Miserablism:
Robert Stark’s Myths of the Near Future »