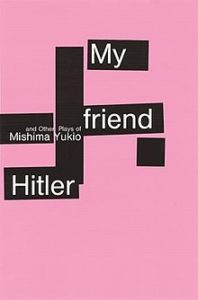 The one and only Rich Houck was host Nick Jeelvy‘s guest on the latest broadcast of The Writers’ Bloc, where they discussed Yukio Mishima’s My Friend Hitler — a play about politics, friendship, and doing what is necessary — and answered listener questions, and it is now available for download and online listening.

00:04:00 Yukio Mishima’s play My Friend Hitler
00:09:00 Who is Richard Houck?
00:12:00 Nick and Rich reflect on what it means to be a lawyer
00:14:30 Earl Warren, Civil Rights, the Commerce Clause, and the legal grounding of Roe v. Wade
00:20:00 The legal definition of tyranny and tyranny as legal chaos
00:22:00 A brief introduction to My Friend Hitler
00:24:30 Ernst Röhm, Gregor Strasser, socialism, the Left wing of National Socialism, and the conflicts within our own movement inherent to nationalism
00:29:00 Strasser pitching a coup attempt against Hitler as permanent revolution and Hitler holding the whip hand
00:34:30 The SA getting out of control, the pathology of Röhm to play soldier, and Strasser, who just can’t take the win
00:40:00 The contempt of Röhm for Gustav Krupp the industrial capitalist, the Reichswehr, and the Prussian aristocratic set
00:46:00 Did Europeans evolve in Europe and not in Africa? Does this possibility hurt Boasian anthropology?
00:49:00 Was Matthew F. Hale denied a law license in Illinois because he is a White Nationalist?
00:54:30 Was Rich Houck’s law license ever under threat in Ohio?
00:57:00 Rich Houck quickly analyzes a number of contemporary legal cases and rulings relevant to White Nationalism
01:09:00 Ernst Röhm as a permanent revolutionary and a destabilizing influence; a permanent child who romanticizes the soldier’s life
01:12:00 The SA engaging in extortion, racketeering, and terrorizing civilians; Röhm as yesterday’s wignat; and Gregor Strasser as yesterday’s Nazbol
01:13:00 An endearing story of Hitler and a mouse who lives in Röhm’s old boot
01:16:00 Hitler the “artist” and Röhm the “soldier”: Hitler resents Röhm for playing soldier and his condescension
01:23:00 Hitler as a tortured artist, wanting Röhm to be better than what he was
01:24:00 Hitler being a friend to someone, his betrayal of Röhm, and being seized by the political machine to do what is necessary
01:26:30 Röhm as half-wignat, half-Bronze Age Pervert; his homosexuality; Mishima’s homosexuality, homoeroticism, and Andrew Joyce’s take
01:30:30 Homosexuals jumpstarting fascism as a possible argument for its toleration and the aestheticism of bodies and dying young
01:32:00 Mishima’s Confessions of a Mask and Röhm as bad optics for German National Socialism
01:35:30 When Röhm’s pure physicality, Strasser’s pure intellect, and Krupp’s political gaming was outmaneuvered by the greatness of Hitler as a complete human being
01:37:30 We win by having a strategy of totality
01:41:30 Ideology informs you which actions to take: How the men of muscle and the men of brains must work together
01:43:00 Cultivating multiple competencies across the political terrain as essentials to victory
01:45:00 Why artists may have advantages over soldiers and men of muscle
01:49:00 Why we may need another artist now to inspire us to victory
01:50:00 The industrialist Krupp’s romantic notion of what he wants iron to do and its most noble position
01:56:30 Krupp as a custodian of capital actualizing himself as per Nick Land
02:01:30 The artistry of business, the business class, National Socialism, and the patriotic industrialist versus the cosmopolitan capitalist and financier class
02:04:00 Closing remarks