From Ezra Pound to Mike Pence 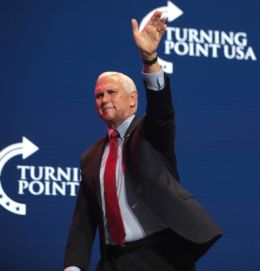 Mosely, Yockey, Evola, and Pound:
Their marbles lost, but genius found.
Or perhaps it’s just The System’s guise
To sully, defame, and pathologize
All those eccentric in speech and prose
Who point out the emperors’ lack of clothes.
The price is further loss of mind
Assigned asylum (of the psychiatric kind).
Much simpler to be a moderate today
And buffer liberalism on a ten-year delay.

Steve King, Queen Ann, Jack Posobiec —
Admittedly we’re not dealing with a full deck.
And then there is Dr. David Duke
Whose main thesis they can’t rebuke.
What is the moral of the story
When silencing kooks is their utmost worry?
Alex Jones and Stefan Molyneux,
Forgotten within the conservative milieu,
From principled solidarity most have availed
It’ll be that censorship has already sailed.

The leader of the pack’s still Trump
Of orange peel and mushroom stump.
His ambrosia is hamburgers, his nectar aspartame.
America wanted the profound, but just got the profane.
“We all bleed red,” Trump crooned at his inauguration
(He’d already said similar about Megyn Kelly’s menstruation).
“Record black employment” he’d never cease to sermonize
While “monitoring the situation” for his persecuted allies.
And when they would accuse him of closet white supremacy
He’d hide behind his son-in-law and the new US embassy.

For the Trumpian faithful it’s one big cope
While others have turned to a newer hope:
Tucker Carlson, who says the election was legit
And dutifully wears a Kabbalah bracelet.
But supporters confirm him to be /our guy/;
Poor Hannity’s mouth still tastes of fungi.
The lesson is with FOX & Friends like these
You don’t need any other enemies
Since their greatest exploit is My Pillow sales
And the casting couch of Roger Ailes.

Now Charlie Kirk is the youthful tea-bagger;
Every college appearance is a real chin-wagger.
The agenda has all the Conservative™ kitsch
But when you flank Lady MAGA, who is the real bitch?
And yet he’s less pesky than Dinesh D’Souza:
“Dems are the real racists,” cries the irony-abuser.
Greta Thunberg, he says, wears NaZi pig-tails.
Just wait till he learns from where the swastika hails.
A lifetime achievement of deep nasal quibbling
But still India’s finest, behind Rudyard Kipling.

The Intellectual Dark Web is the grifter’s fake lesson:
Dave Rubin, Douglas Murray, Milo, Jordan Peterson.
Its tenure is mostly a social media racket
Of a Dangerous Fag and drugged-up straitjacket.
Ben Shapiro is their plucky, concomitant act
Who fled California because of “cultural impact.”
He likes to name-drop his wife’s medical career;
Too bad she can’t cure his verbal diarrhea.
He’ll have no more Hanukah in downtown Santa Monica.
Instead he’s enriched Florida, with yet another yarmulke.

There is another tribe, a rather noble clan
Dressed not in white robes, but in Scottish tartan:
Heather Mac Donald, the polite empiricist;
Based comedian Norm, already sorely missed.
Do they finally realize up in conservative heaven
What we needed all along was a little more Kevin?
And Pat Buchanan deserves honorable mention.
His Death of the West warrants special comprehension.
It was all foreseen earlier by Spengler’s great mind
So we send him our salutes, of the Teutonic kind.

The past year took Sheldon Adelson and Colin Powell.
It’s good when even warmongers must throw in the towel.
We need another Enoch, rather than a neo-con
His rivers of blood have become the new Rubicon.
But the Grim Reaper is fickle, and very rarely vexed.
Pack warm clothes, Mr. Kissinger, I think you may be next.
And since the Reaper is Right-wing in pop-culture depiction
We may as well supply him with a sardonic prescription:
If you prefer heretics and their pietistic stances
Take Pope Francis right away, but give us back Sam Francis.

Glenn Beck, Mitt Romney, Ben Carson, Mike Pence
Prefer to merely hand-wring and sit on the fence.
Camp of the Saints they cannot fathom as prophetic.
Their wisdom isn’t really theirs, their moral fabric is synthetic.
Without dissent and refutal they will slowly outcompete us;
They conserve hardly anything more than the inner-city fetus.
So spare us the prim, the virtuous, and the ministerial
And give us the droll, the aberrant, and vividly ethereal.
The currency of prodigy has never made greater sense:
It’s better to have one Ezra Pound than a hundred Mike Pence.

» Paying for Veils: 1979 as a Watershed for Islamic Revivalists