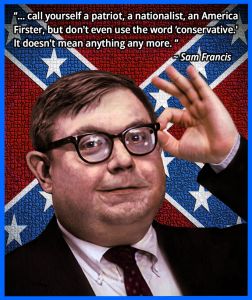 The late Sam Francis may finally get his due. Several mainstream conservative writers now interact with the paleoconservative’s work and admit his influence. Ever since Donald Trump first captured the public’s imagination in 2015, political observers have looked to Francis to explain the populist moment.

It could be said that Francis has now been rehabilitated in respectable discourse, but this has come at a cost. Those who positively cite Francis eschew or outright condemn his racial views. The “respectable” Francis is now just a theorist of class warfare and the managerial state. His very obvious support for white identity is ignored in favor of imagining he was the prophet of the conservative, multicultural working class.

The latest example of this comes from Matthew Schmitz at The American Conservative. Schmitz has long delved into ideas from the Dissident Right. In 2017, he wrote a rebuke of the Alt Right’s alleged anti-Christianity in an article entitled, “Christianity is for Cucks.” He has written similar articles since then. But while he will signal against the supposed extremism of the Dissident Right, he’s still influenced by us.

Schmitz positively cited Sam Francis this week to challenge claims that the “insurgent new right” has a shaky basis of support. Schmitz does not see identitarians as the new Right; he sees it in “integralism” and other respectable forms of post-liberalism. While he admits that many of these strains are too different to be united under one clear ideology, he claims they all fall under the label of new Right because they all “stress consolidation over dispersion, force over persuasion, communal belonging — national or religious — over individual autonomy.”

Critics have said the new Right is at odds with the actual Trump-supporting base. These critics claim the base is much more libertarian than integralists imagine. They also insist that Trump supporters are more motivated by “owning the libs” than by appeals to the common good.

[The new right] has a deep and abiding base of popular support in what Sam Francis called the “post-bourgeois proletariat,” people who live in, but are not fully part of, our managerial regime. Their outlook — described by Francis as “working-class anti-liberalism” — chimes with new right themes.

Post-bourgeois proletarians hate political correctness, not because they are principled defenders of free speech but because they resent the managerial class that creates and enforces the current speech codes. They resent the HR manager’s faith. They do not reject all pieties. . . .

Post-bourgeois proletarians prefer shows of force to subtle forms of manipulation. They are Jacksonians on foreign policy and law-and-order voters on crime. They probably do not read the Bible or consult the Catechism, but they honor flag, faith, and family.

Francis described the beliefs of the post-bourgeois proletariat in ways that will seem familiar to any follower of abstruse debates over postliberalism, integralism, and the like. They show “little attraction to bourgeois conservatism and its emphasis on laissez-faire economics, the rights of property, [and] the minimal state.

Schmitz goes on to see this anti-liberal proletariat as the nucleus for the new right’s seizure of power. The conservative writer dismisses the traditional middle class of small businessmen and property owners as too small and incapable of resistance against the managerial order. Only the proletariat, eager for the new Right’s message, can. “Opponents of managerialism must give voice to working-class anti-liberalism, mobilizing their base of support, or they will be no more effective than Don Quixote,” he argues.

Schmitz concludes by saying that all this proves that the new right’s ideas carry weight with a broad constituency:

Theories like integralism and post-liberalism may at times take on fantastical form, but they track the movements of real bodies. Like shadows in a film noir, they are distillations and exaggerations, expressing in stark terms truths that otherwise go unseen.

At first glance, identitarians would probably not be troubled by this analysis. They would feel that they are part of the new Right against Conservative Inc. A lot of our people see the working class — albeit with an emphasis on the white working class — as the best bet for social change. Identitiarians also wouldn’t have an issue with Schmitz’s description of this class and their characteristics.

The issue comes with what Schmitz implies that this class would gravitate towards. The writer takes bits of the Trumpist moment and Francis’ thinking to conclude that it all leads to a multicultural working class fighting for integralism. This is only hinted at in this American Conservative article, but is fleshed out in Schmitz’s other writings. In 2018, he wrote:

Progressives now stand with global capital, as the Pride Parade so clearly shows. Christians in turn should stand with the working class, which is more religious, more diverse, and more patriotic than the managerial elite. Only by reducing inequality and restraining corporations can Christians avoid being buried. (Emphasis added)

In 2020, he entertained the idea of “post-liberals” supporting Kanye West’s presidency because it would help to build a “multiracial, working-class, patriotic conservative party.”

This completely misunderstands Sam Francis. Francis was pretty clear about the identity of this working class: It’s a white proletariat. He did not envision Mexican fruit-pickers, black McDonald’s workers, and white welders all joining forces to take on the white managerial elite. Race is inseparable from Francis’ thinking.

Here is what Francis said about the dispossessed revolutionary class in 1994:

As long as whites continue to avoid and deny their own racial identity, at a time when almost every other racial and ethnic category is rediscovering and asserting its own, whites will have no chance to resist their dispossession and their eventual possible physical destruction. Before we can seriously discuss any concrete proposals for preserving our culture and its biological and demographic foundations, we have to address and correct the problem we inflict on ourselves, our own lack of a racial consciousness and the absence of a common will to act in accordance with it.

A post-bourgeois proletariat without any sense of racial consciousness is doomed to failure. This is at the core of Francis’s thinking.

That’s not to say that it’s bad that mainstream conservatives aren’t positively citing a bowdlerized Francis. It’s actually a good thing. More attention to Francis means more people will find his less “respectable” essays and see the world in a whole new way. It will certainly lead to some readers turning to the Dissident Right. The more people who read Francis, the better.

But Francis’ ideology cannot be separated from the racial element — nor can National Populism itself. Donald Trump was vulgar, brash, and racially insensitive when he ran for President in 2016. Nothing in his agenda or style related to Catholic integralism, outside of a greater willingness to use state power and support for some entitlement programs. His agenda was animated more by white backlash than class war.

This is an inconvenient truth for the “new right,” but it’s one they can’t deny. They just need to read more Sam Francis to understand what truly makes Middle American radicals tick.