How Conservatives Can Capitulate To The 1619 Project 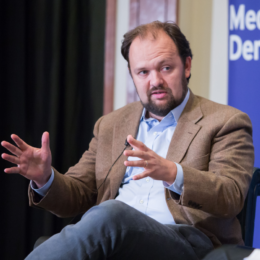 A fierce battle is being waged over American history, pitting liberals against conservatives over how to present our past to children. Conservatives argue American history should inspire a civic nationalism within children, regardless of color, and our history should present the Founding Fathers as colorblind liberals. Liberals believe there should be more criticism made against the Founders and a greater emphasis on our nation’s racism, but they ultimately present America as a noble experiment. The Leftists share the liberal’s desire to criticize the founders and highlight racism, but they see America as fundamentally flawed and only redeemed by non-whites. The nationalist view of American history, which sees the Founders as ethnonationalists and stresses America’s founding population over its supposed ideals, doesn’t feature in the debate.

One of the most prominent figures to wrestle with this debate is the New York Times’ conservative columnist Ross Douthat. He grappled with the issues raised in this fight over history over a series of columns and came up with a compromise. Douthat’s compromise is nothing more than a conservative surrendering to the new paradigm. He quibbles about some of the excesses, but it’s only a meek protest. Douthat comes to terms with the 1619 Project and tries to direct in a slightly more “conservative” direction.

His series first begins with a neutral overview. He defines the sides in the historiographical war pretty accurately. He says liberals “finally exorcise the ghost of Lost Cause historiography, the romanticization of the Confederacy that still haunts textbooks in some corners of the South” and “broaden the narrative of race beyond the Civil War and the civil rights era.” Leftists want to “to weave these revisions into a more radical narrative of U.S. history as a whole — one that casts a colder eye on the founders and Lincoln’s halting path to abolition, depicts slavery as the foundation of white American prosperity, and portrays the Republic’s ideals as just prettying up systems of racist and settler-colonialist oppression.”

Douthat also captures the patheticness of the conservative side in this war.

[C]onservatives often see themselves as objecting to the most radical parts of progressive revisionism, not the entire project. . . compared with just a generation ago the position of many conservatives has shifted, becoming explicitly anti-Lost Cause, anti-Confederate flag — and, in the recent congressional voting, mostly pro-Juneteenth as well. In its contest with the new progressivism, the right is abandoning Lee and rallying to Lincoln.

He also notes that many Republican lawmakers seeking to ban Critical Race Theory readily accept liberal precepts that we need to teach more about racism. The conservative side really just wants to get us back to the supposedly colorblind liberalism of the pre-Obama period. It is “conservative” by the fact it wants to conserve something, but it’s not something nationalists should want to conserve at all.

Douthat hopes that the sides can agree to a synthesis where the “progressive desire for a deeper reckoning with slavery and segregation gets embedded in a basically patriotic narrative of what the founding established, what Lincoln achieved, what America meant to people of many races, even with our sins.”

The synthesis sounds worse than the radicals’ vision. It’s neoconservatism that checks its white privilege. Douthat develops this horrid patriotism in further articles.

In his second column in the series, he urges conservatives to accept the concept of “systemic racism.” “The basic claim that structural racism exists has strong evidence behind it, and the idea that schools should teach about it in some way is probably a winning argument for progressives,” he argued. Douthat even claims systemic racism can support “conservative” arguments when it comes to abortion and school choice. The chance to own the libs with arguments that abortion and teachers unions are racist tempts conservatives to teach that America is racist.

Douthat tries to distinguish between his sensible systemic racism teaching and the radical version. He doesn’t like Robin DiAngelo and Ibram X. Kendi for being racial essentialists and making whites feel bad for racism as individuals. He only wants whites to feel bad for benefiting from a white supremacist country. This is another compromise the columnist wants to make.

He carries on this work in his next column on patriotic education. Here, Douthat hints at his autistic Catholic conservatism. He notes that he raises his kids with a standard patriotic understanding of America and holds back his “Catholic critiques of liberal individualism.” Douthat says he teaches his kids about slavery and other sins of the past, but the education he imparts is one intended to instill love for country. He offers the perfect patriotic course for kids: the history of blacks.

From Harriet Tubman to Martin Luther King Jr., the story of the African-American experience is the most straightforwardly heroic American narrative, the natural core of liberal patriotism — something liberalism understood at the time of Barack Obama’s election, but in its revolutionary and pessimistic mood seems in danger of forgetting.

This is the 1619 Project in brighter shades of red, white, and blue. The 1619 Project pedestals blacks as the heroes in America’s story while whites are cast as the villains. Douthat’s “patriotic education” is just more optimistic about the nation’s founding values and less hostile to its whites.

Douthat’s latest column on American history, however, upends his patriotic education. Writing on the French-Indian War, he admits that he favors the French over the British. America’s Anglo settlers of course fought with the British and America came to be in large part due to the French-Indian War. And why does Douthat prefer the French over the British? Because they were Catholic and nicer to the Indians. He fantasizes about “a world where the French somehow held on to their territories might have been more Catholic (obviously a good thing) while offering more possibilities for Indigenous influence, power, and survival than the world where England simply won the continent.”

Douthat has pined for a Catholic America in the past. In one 2019 column, he wrote that his ideal polity spans from Quebec to Chile and is ruled by a multiracial Catholic aristocracy. He’s certainly not an American nationalist.

LARPing is a common phenomenon on the Right, so we shouldn’t be too hard on Douthat for engaging in this stereotypical vice. What’s worse about it isn’t the apparent disloyalty or cringe Catholic fantasy, but that he praises this LARP as more progressive than Anglo America. If only the Catholics had won, we would’ve had a tolerant and diverse empire dedicated to the Virgin Mary. . .

Douthat writes for the New York Times and he wants to keep his job so he can keep buying patriotic books for his kids. This is the easiest explanation for his cuckery. But Douthat often delves into topics forbidden, such as matters of race, immigration, and modern degeneracy. This often makes him a target for social media mobs, even though he ends all of his columns with an argument within the narrow limits of liberal discourse. He’s not going to say anything too radical.

His column series offers conservatives a way to accept the new order in George Floyd America. They can complain about the excesses of Critical Race Theory so long as they accept its core tenet of “systemic racism.” They can teach their kids to love their country so long as they make blacks the central characters. And they can even imagine an alternative Catholic imperium so long as its chief virtue is diversity. The respectable conservative will never risk anything to challenge the prevailing order, no matter how sick its new dictates are. They will always find a reason to surrender.

Whether other conservatives will follow their path remains to be seen. The critics of Critical Race Theory offer little in the way of a serious alternative and they may find Douthat’s black-centric, systemic racism-believing patriotism appealing. This has already occurred to a certain extent. Donald Trump’s 1776 Commission essentially made Martin Luther King, Frederick Douglass, and Harriet Tubman the true founders — and this is conservatives’ only proposed alternative to the 1619 Project.

If conservatives want to not have their kids learn about systemic racism, even in a “patriotic” way, they have to articulate a nationalist alternative to anti-white insanity. There’s no need to sugarcoat how America was made. We should not feel shame for conquering a continent and making a nation for us and our posterity.

« The Passing Over of The Overcomer