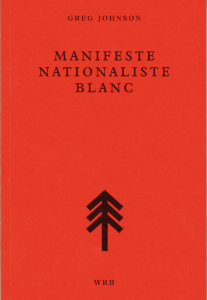 I was interviewed by the French nationalist and Breton regionalist webzine Breizh-Info on the occasion of the publication of the French translation of The White Nationalist Manifesto, which you can buy from Akribeia. This is the English original of my interview.

Can you introduce yourself to our readers?

I am an American. I hold a Ph.D. in philosophy. I am the author of sixteen books about politics, philosophy, and film, most recently White Identity Politics. I am the owner of Counter-Currents Publishing and the Counter-Currents webzine, which are approaching their 11th birthday on June 11, 2021.

What is the basic message of The White Nationalist Manifesto?

White people around the world—in all of our homelands—are facing demographic, economic, and cultural decline. Our birthrates are below replacement. Increasing numbers of whites choose partners of a different race. Globalization has brought the Third World to our shores while shipping our industries to the Third World. The integrity and legitimacy of our cultures are under assault by multiculturalism and anti-white ideologies. “Racism” and identity politics are encouraged for every group except white majorities. If these trends are not reversed, every white nation will eventually disappear. The French will be as extinct as the Hittites. The white race will be as dead as the dodo.

These trends were started by powerful people, which means they can be reversed the same way. We simply need new elites, new leadership. White Nationalism, as I define it, advocates sovereign homelands for all white peoples dedicated to their biological and cultural survival and flourishing: France for the French, Hungary for the Hungarians, Sweden for the Swedes, etc. White Nationalists need to take control of their governments and economies. Then we need to reverse the demographic and cultural trends that are leading to our destruction.

Why was it important to publish your book in French?

I want the Manifesto to be published in all European languages, because all white peoples face the same basic problems: lack of sovereignty, demographic and cultural decline, open borders, etc. France and the French language, however, are particularly important, because French is the language of scores of millions around the world. Also, France is one of Europe’s largest and most important nations—and one of the most imperiled by immigration, multiculturalism, and its own universalist-Republican ideology.

You say that “diversity” is a codename for “white genocide.” How can you explain that?

After World War II, the United Nations defined “genocide” not simply as killing off a people but also as creating conditions that make it impossible for it to reproduce and survive over the long term. The long-term survival of all white peoples is now threatened by such trends as low fertility, miscegenation, and replacement immigration from the Third World.

These trends are not natural phenomena. They are man-made. They were imposed by our political elites. Thus they fit the definition of genocide. What’s more, our elites openly welcome the demographic and political decline of white majorities—while claiming that the Great Replacement is a “Right-wing conspiracy theory” that needs to be censored.

It is important to understand that our decline is a matter of public policy. On the one hand, this is encouraging, since policies can be changed. On the other hand, it is sobering, because we must confront the fact that we are ruled by implacable enemies who are every bit as evil as Stalin, Mao, and Pol Pot.

In America, did the 4 years of Donald Trump change anything for the white population in America?

Trump’s greatest achievement took place the day he announced his candidacy in 2015. The political establishment in the US was united in its advocacy of open borders, economic globalization, and an interventionist foreign policy. The vast majority of Americans don’t like these policies, but the elites support them,  and American “democracy” has made a science of not giving the people what they want.

Trump rejected the elite consensus on immigration, free trade, and foreign policy. American voters were delighted. American elites lost their minds. It was beautiful to behold.

Once Trump was in the White House, however, he found it very difficult to implement his policies because his enemies still occupied positions of power and were united against him. Yes, Trump probably could have accomplished more if he had a stronger character and more political experience. But even the strongest leader can accomplish little if the people below him feed him false information and refuse to carry out his orders. In the end, the political establishment removed Trump from office by certifying a blatantly fraudulent election.

Despite his political failures, however, Trump won a permanent victory on the metapolitical plane simply by defying the establishment and offering the voters what they want. There will be many more “Trumpian” populists, most of them far more intellectually consistent and politically competent than Trump. The Republican Party is becoming a nationalist and populist party because of Trump, and I don’t think the political establishment can stop that.

Are you worried about Biden and his team?

Of course I am worried about the Biden administration. Fortunately, the congress is too divided to pass their most radical proposals, and the administration is burdened by a senile and crotchety figurehead, a stolen election, ongoing black and communist violence, the Covid pandemic, a deep economic recession, a migrant crisis at the Mexican border, and a fixation on unpopular “woke” policies: transsexualism, critical race theory, etc. All this means the Biden administration is a golden opportunity for Right-wing populist agitation.

Why are you so sure that people from different races can’t live together in the same country?

Diversity is not a strength. It is a weakness. The whole Western political tradition understood this. Only in the twentieth century was the crazy claim “Diversity is a strength” propagated. It is an article of faith, a quasi-religious dogma that defies historical experience, common sense, and science.

History shows that even peoples who are genetically very similar to one another can be divided by language, religion, and culture: Serbs and Croats, the English and the Irish, etc. When these peoples try to share the same geographical space, there is hatred and violence. The best solution to this sort of conflict is to give warring peoples separate homelands.

When you add racial differences to differences of religion and culture, the problems of diversity are deepened. Even if people of different races share the same religion, language, and culture—as in the case of blacks and whites in America—there is division and conflict.

The deepest explanation for why diversity is a weakness not a strength comes from science. As I discuss in the Manifesto, J. Philippe Rushton, an evolutionary psychologist, argued that genetic similarity is the basis of harmony between people. The closer we are genetically, the better able we are to understand one another, which makes cooperation possible. Genetic similarity is also the foundation of empathy, solidarity, and altruism, which promote social order. This is why we see uncanny harmonies between genetically identical twins, even those raised in different environments. Rushton argues that harmony decreases with genetic diversity. Thus the most happy and harmonious societies are genetically homogeneous, whereas the least harmonious societies are genetically diverse. Want to live in a happy society? Promote homogeneity and resist diversity.

For you, what is most important for the future of white people across the world?

Before there can be political change, people must change their thinking. We call this “metapolitics.” Before white peoples can regain control of their homelands and their destinies, they need to understand who “we” are. It is a question of identity. Then they need to be convinced that there is a crisis. They must also be convinced that something can be done to fix it. Beyond that, they must be convinced that they are doing the right thing. Once these questions are answered, political change is inevitable. Answering such questions is the purpose of The White Nationalist Manifesto. In my book White Identity Politics, I interpret the rise of national populist political movements around the white world as a sign that this intellectual and political awakening is already underway. I am fundamentally optimistic about the future of white nations around the world.