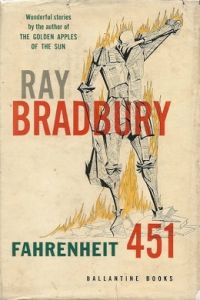 Ray Bradbury’s classic dystopian novel Fahrenheit 451 was first published 68 years ago, and the first film adaptation was produced in 1966, but its messages remain surprisingly relevant today. Although many interpreted it as merely a story about government censorship, Bradbury himself characterized the work as a statement on the dumbing-down effect of television. Rather than government-imposed censorship against the will of the people, book-burning is welcomed by a complacent population who resent anything beyond the mundane.

The film adaptation from French director François Roland Truffaut stars Austrian actor Oskar Werner, who may have been chosen due to his own life having several parallels to his character Guy Montag. Montag is a fireman who burns books for a tyrannical and philistine regime. Eventually, he comes to realize the value of literature and is forced to abandon his position and flee the city, joining a group of like-minded people in a rural area. The real-world Werner was drafted into the German military during the Nazi era, and like Montag, was uncomfortable with his role due to moral convictions. As a pacifist and an opponent of National Socialism, he eventually deserted and went into hiding in the woods around Vienna.

Both Montag’s conformist wife Linda and his young dissident friend Clarisse are played by the same actress, Julie Christie. As with Montag and his change of heart regarding his career, this is presumably a statement that rather than conformists and dissidents being entirely separate groups of people, the same person can be both at different times. This is reflected in the contemporary Dissident Right, with most people having been more mainstream in their thinking at some point in the past.

The film describes the attitudes underlying censorship efforts in the present day very well. The captain of Montag’s fire brigade explains that books make people unhappy, as readers may dream of being someone they are not. Far from having an ethic of self-improvement, he condemns such aspirations as vain, pointless, and even insulting to others. People who read books must think they are better than their neighbors, he insists, which will not do. This reflects the same sort of jealous leveling attitude which was a major theme in communism and persists in modern-day social justice thinking.

Another major factor is the desire for a quiet, routine life, undisturbed by anything out of the ordinary. At one point, Montag forces Linda and her friends to listen to his reading of an excerpt from David Copperfield expressing the experience of a man in an unhappy marriage whose wife falls ill. They object to the book on first sight of it, and as he reads, one woman named Doris begins to cry, explaining that she “can’t bear to know those feelings. I’d forgotten all about those things.” Rather than appreciating that life naturally includes negative emotions, one of Linda’s friends calls the material “sick” and reading it cruel. Another denounces the “evil words that hurt people.” Linda reproaches Montag for making Doris cry, and is unmoved by his explanation that “she cried because it is true.” This sort of shallow philistine attitude is apparent throughout the film and common in contemporary society; we are all familiar with activists who believe that some speech should be banned because it can cause certain emotional reactions.

A common characterization of primitive or degenerate people today is that they have no future and no past, but live only in the immediate present. The population in the film naturally has little historical memory, being cut off from literary and historical documents by the taboo against reading and their own lack of curiosity. But they also lack much memory of their own lives. At one point Montag asks Linda if she remembers the day they first met, and she cannot. He finds this sad, but she cannot even see the value of such a thing. The closest she comes to concern for the future is hoping that if Montag gets a promotion they can afford a second viewscreen.

As is the case today, the amusements of the masses include drugs to alter their mood, and many do not care about the risk involved. Montag comes home one day to find his wife unconscious on the floor, having taken numerous pills. He calls an ambulance, but both the man answering the phone and the men who arrive at his house seem much less concerned by the situation than he is. The paramedics assure him that they handle 50 such cases a day and that she does not need to see a doctor. Instead, she is treated on the scene with a blood transfusion, and although she is still unconscious, a paramedic assures Montag that she will be feeling perfectly well in the morning. He is telling the truth, but the men’s nonchalant attitude is still unsettling and points to an irresponsible society.

The next day at breakfast, Montag starts to tell Linda about the incident, but stops himself as her attitude becomes clear. “Talk all you like, if it makes you happy,” she says, making clear that she does not see the value of telling or learning the truth, but sees speaking as only another form of pleasure. Montag realizes that she would not appreciate the truth; she is only interested in immediate pleasures such as taking pills and eating breakfast.

One of the strongest influences on most people is a simple desire to fit in, which takes precedence over the truth when the two conflict. In the film, television is an interactive experience, with the presenters sometimes pausing and addressing audience members by name to ask for their input. Linda is overjoyed at this experience, and upset when Montag points out that the presenters do not know her personally and are most likely using the name “Linda” to refer to thousands of viewers who share the same name. Even it is true, this is a mean thing to say, she complains. Obviously, it disturbs her feeling of belonging to a select group of viewers, which she values more than the truth.

This desire to fit in results in a tendency to follow the herd by believing whatever the established authorities say, and in this case the authorities speak largely through television. The “viewscreens,” as they are called, are a source of overt propaganda, telling the population how to think and how to live. There is a preview of modern social justice hypocrisy in a television presenter’s authoritarian admonition to “Smother malice, strangle violence, suppress prejudice, hate hate! Be tolerant today!” She also denounces those who read and encourages viewers to turn them in.

People in the film have only shallow emotional connections with each other, in line with a trend in the late 20th and early 21st century towards fewer meaningful personal connections. A 2006 study found that between 1985 and 2004, the mean number of people Americans said they could discuss important matters with dropped from 3 to 2. The number of people reporting no such confidants nearly tripled. A full 80 percent of respondents said they now discuss important issues only with family members, up from 57 percent 20 years before. [1]

In Fahrenheit 451, even family connections are not particularly strong. Montag points out to one of Linda’s friends that she does not even know where her husband is. She was told he was called away for military reserve training exercises, but he is out of contact with her and may well have been drafted into a war, where his life could be at risk. Another woman dismisses this concern, explaining that “it’s only other women’s husbands who get killed” in wars. A third agrees and adds that she has known people to die in other ways, such as “getting run over, jumping out of a window. . . like Gloria’s husband a few nights ago,” but seems quite unperturbed by this, explaining that “that’s life, isn’t it?”

Given a conformist society with little regard for personal ties or any values beyond immediate comfort, the demonization and shunning of dissidents are to be expected, in the film as in the current year. Anyone who breaks the rules will inspire scorn and there is little to restrain others from casting them aside. When Clarisse is fired from her job as a school teacher, she is given no reason. She assumes that it is because she has more creativity than most and makes her students think, similarly to another teacher whom she had replaced. Montag encourages her to return to the school and confront the authorities to demand an explanation. When she arrives there, she recognizes and greets one of her former students, who sees her, hesitates, and runs away in fear. A second boy has a similar reaction. Presumably, the students have already been made to forget that she was their teacher and believe that she is a dangerous subversive. She never gets to the point of facing the authorities, being overwhelmed by the way her students have already been alienated from her.

It is a long-standing pattern for those in the contemporary dissident right to be not only banned from social media platforms or other services, but to be refused any meaningful explanation for such a move. Whether this is an attempt to avoid liability for potentially illegal discrimination is unclear. But regardless of the motive, it gives the impression that certain people, based on their political beliefs, fall outside of the normal rules of human interaction. It is a cultish practice that belongs only in a totalitarian society like that of Fahrenheit 451.

It should also come as no surprise that such citizens will gladly inform on each other. In the film, there are public drop boxes where anyone can submit incriminating information on others, and Montag’s wife ultimately visits one of these to betray him to the authorities. When he is forced to flee the city, a car drives down the street with a loudspeaker commanding the people to help search for the fugitive, and every citizen dutifully steps onto their front porch to watch for him.

Science fiction is sometimes a fanciful imagining of the future, but it has also often been used to reflect current social trends. Literal book-burning is not yet a reality, but all of the attitudes underlying it in Fahrenheit 451 are very real. Efforts to censor ideas and punish those who express them are no fantasy either. If we are to escape this dystopian horror we will need a cultural shift to reverse the trend toward a shallow, rootless life.