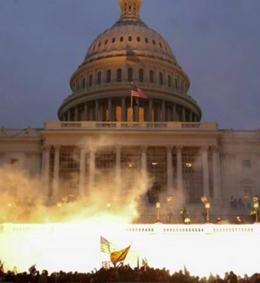 A line was crossed on January 6, 2021: a large group of what seemed to be almost entirely white Americans marched to the Capitol building in Washington DC in an effort to both express a general displeasure at election fraud and to protest the confirmation of the deeply, hopelessly corrupt and soulless neoliberal Joe Biden as President. They did it beautifully, in a magnificent display of American eccentricity and what used to be called the “can-do spirit.” Anyone who did not tear up, laugh out loud, or howl in joy at some point while watching these events transpire missed out on the most quintessentially American event of our lifetimes.

For the normal American white man, the Capitol protest was inspirational. But from the immediate back-stabbing from supposed political allies to the predictable condemnation from the usual racial enemies, the normal white man likely feels silenced, perhaps in fear for his job or his safety, and alienated (possibly even from his own family) by his private feelings of joy and thus retreats tragically further into his isolated world of secret pride and longing for an irrecoverable past. He needs to see and hear us publicly defend him. He needs to know that he is not alone, that he is right to feel proud, and that White Nationalists are the ones on his side. He needs to know that there is a future beyond demonization, mockery, erasure, and constantly keeping his mouth shut about everything that matters to him.

Besides, there is no going back now and there never is: we either claim this as a victory for our side or we apologize for yet another trumped-up charge forever. Choose now.

Fortunately, the choice is quite easy: it really is more clear than ever that we will triumph over this bloated, corrupt, teetering empire. The rigged election of Joe Biden was our greatest victory yet, and the storming of the Capitol should be seen as a victory party, the beginning of a new era, the official start date of the next phase of Post-America.

The American White Nationalist has always been aware of the occupation of his government by a foreign power. He has always known that behind every “defender of democracy,” with his carefully manicured “shirt sleeves rolled up to get the job done” image, was a sleazy collaborator, eager to sell out his countrymen, happy to vandalize and pollute the very land his ancestors spilled their blood to attain, passionate in his commitment to providing a safe haven for the world’s elite economic terrorists and the world’s street criminals.

It is, however, just starting to dawn upon average conservatives from coast to coast that something has gone seriously wrong in this country, that forces darker than they had previously thought are working to prevent them from having a say in their own futures, that the problem might not be as simple as “Demonrats.”

A large segment of American whites is beginning to feel a growing unease with their relationships to all levels of government. The President, the man they thought would save them, cannot even save himself. The men in blue they so proudly and vocally support arrest them in the streets for daring to defend themselves from violent anarchist freaks. On 1-6-21, the police actually shot in the neck and killed Ashli Babbitt, an unarmed white woman, for engaging in what would have been universally described as a peaceful protest if she had been black or an anarchist or some other sort of system-sanctioned activist. When whites protest an obviously fraudulent election and get murdered by cops for doing so, we are called domestic terrorists by our own government and condemned by the leaders of the party that somehow still manages to get most of our votes.

A similar, though milder and less immediately consequential, trajectory of disillusion is occurring among so-called progressives who are starting to regret having voted for Joe Biden. They too were sold a lie. The hysterical Trump-hatred and extended Cold War director’s cut fever dreams of the past four years have had most of them convinced that Joe Biden was somehow the better choice for Chief Israel Stooge. But instead of whatever it was they thought would happen — who can actually tell? — they simply managed to position a sickeningly ordinary neoliberal for installation into the White House at which time he proceeded to fill his cabinet with the lowest DC vermin he could find, often hiding them in plain sight covered under the carefully crafted moral veil of non-whiteness (the new “get out of jail free card” for Americans dumb enough to still believe anything said by cable news hosts and the permanent television seat-warmer class). They are starting to figure out that “diversity” is a scam but they have no one on their side who is willing or able to lead them any further towards the light. Though their shock is truly bewildering, one can certainly sympathize with their disgust.

A new generation of progressive American whites, along with their Trump-supporting counterparts, are angry and ready for real change. But who will give it to them? It might be too soon to say. We can, however, make sure that pro-white, anti-immigration, anti-war, anti-capitalist voices are part of the conversation. If we relinquish our role in this very real American political realignment either by continuing to support Republicans and Democrats or by resigning ourselves to permanent neoliberal hegemony then we stand no chance of attaining real power or any ability to acquire lasting benefits for whites.

It is certainly not a stretch to argue that the explicit anti-whiteness which has now become standard among mainstream politicians and news media will start to make many more whites uncomfortable in the near future — and not in the “good” way intended by Jews and other diversity cheerleaders (very few white people are going to come out of this mess with better feelings towards non-whites of any race). Both parties are experiencing an exodus of Americans better able to spot lies and more upset by corruption than their neighbors. This is our audience.

In the days following the events of January 6, the entire Judeo-capitalist class and its political henchmen from both parties have condemned the Capitol protestors in comically hyperbolic terms while agents of its individual corporate tentacles have been busy flexing their censorious muscles and — quite naturally — spitting in the doughy faces of the sad, socially acceptable, and politically impotent half-men who choose principles over power. This works to our advantage: Bank of America, Ted Cruz, Dan “Eyepatch McCain” Crenshaw, Ben and Jerry’s, Chevron, and every bimbo with a degree in meaninglessness have condemned the protestors.

Displaying blatantly anti-white sentiment, profound hypocrisy, and groveling before a legal system now proven to be irredeemably corrupt in the eyes of millions of white Americans could not be better for those of us who have claimed for decades that our system is a rotten and murderous inversion of all that is good and decent. The short-term inconveniences of deplatforming and “no-fly lists” among other things are nothing compared to the long-term gain of total illegitimacy. The empire’s palms are sweating, and they just shook hands with the new year.

Tempting though it might be under the hot interrogation lights, it is important to not distance ourselves from the protestors: do not claim that they were Antifa; do not claim that the police let them in. This not only diminishes their triumph, but it will do nothing to minimize their inevitable individual punishments or the wave of retribution to which we will all be subjected in the form of censorship and lost freedoms. Defend them at every turn as heroes — because they are. Whether they were there simply for the spectacle or for serious political reasons, they were present in a heroic moment, and will suffer the consequences of heroes. The human margins of empire are often messy, and its fall might at times make snobs uncomfortable. So be it.

For those of us who have been White Nationalists or something broadly equivalent for a long time, the coming months and years will require great patience as more people start looking to us in order to figure out what this is all about. The facts and concepts we take for granted will be brand new to most people and the frustrated dismissal of basic questions from newcomers willing to engage us must be suppressed more often than not (although good-natured bullying and mockery are in fact their own particular teaching styles). 1-6-21 showed anyone with a brain who the real resistance is and that it has very little to do with Donald Trump and, like most White Nationalists said from day one, it never did. Both progressives and conservatives have been sold out (even by Trump, which ought to come as no surprise). There are millions of politically homeless American whites whose politics overlap a great deal on important issues but do not yet understand how or why: we can tell them and win them over. We can and we will. And when we do, the next time we protest it can be as one voice, peacefully and with an unprecedented energy borne of solidarity and purpose.