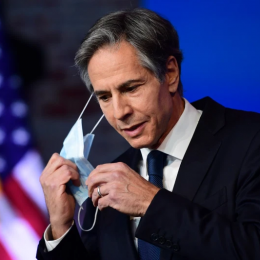 Joe Biden’s cabinet promises to restore globalism to its previous dominance. Gone are any hints of America First or aspirations to pull back from foreign hellholes. Liberal interventionism will be the Biden administration’s credo.

Biden’s pick to be the next Secretary of State, Tony Blinken, encapsulates the cabinet’s worldview. Upon announcing his nomination, Blinken shared his stepfather’s Holocaust story.

“At the end of the war, he made a break from a death march into the woods in Bavaria. From his hiding place, he heard a deep rumbling sound. It was a tank. But instead of the iron cross, he saw painted on its side a five-pointed white star,” Blinken said. “He ran to the tank. The hatch opened. An African-American GI looked down at him. He got down on his knees and said the only three words he knew in English that his mother had taught him before the war. God bless America.”

Blinken concluded: “That’s who we are. . . That’s what America represents to the world, however imperfectly.”

The tale sounds too much like a Lifetime Holocaust special to be true. Sure enough, it probably isn’t. It was a common media trope not too long ago to credit the all-black 761st tank battalion — the only one of its kind in the segregated US Army — with the liberation of Dachau. Blinken’s stepfather, Samuel Pisar, was imprisoned at Dachau and his march was likely not too far from the camp. PBS made a documentary on the subject in the early 1990s. It earned plenty of accolades and even an Oscar nomination. The documentary was later pulled after an American Jewish Committee report found no substantial evidence that the 761st was near Dachau. None of the battalion’s daily reports mentioned such an important event and researchers found the black tankers occupied a different concentration camp in Austria.

The myth is particularly offensive to Jews and it elicited an angry Times of Israel reminiscence in 2013. But the myth, now in the service of America First, is being touted once more in the media. “It is, perhaps, one of the great ironies of history that a resourceful Jewish boy fleeing for his life in Poland was carried to freedom by a Black man fighting in a racially segregated army for a country that accorded the soldier little freedom at home,” CNN says of the unit. The article admits that the battalion never liberated Dachau, but it accepts they rescued Blinken’s stepfather. The article claims the battalion embodies America’s values and applauds Blinken’s story for its celebration of these black soldiers.

The black tanker may not be the only fake part of the story. Pisar saying “God Bless America” may also be a fib. The phrase was popularized to the world by Irving Berlin’s song, which was first heard by large audiences in the late 30s. It’s possible Pisar had heard the song, but unlikely for a Polish Jew who spent the war years in ghettos and concentration camps. It’s not like the SS blasted American kitsch for their prisoners’ enjoyment.

But the story is too good to pass up. As Blinken says, this tall tale is “who we are” — according to globalists. America, as represented by the black tanker, is a multicultural pillar of freedom and it only uses its military might for good. That black tanker could never commit a war crime; he can only bring liberty to helpless Jews fleeing from big bad white supremacists. Together, they will take down evil and make the world a better place. The black tanker symbolizes liberal foreign policy. We only invade to “liberate” the downtrodden. The soldiers who actually liberated Dachau were all white, but white soldiers — many of whom backed segregation — don’t tickle the liberal imagination. Salt-of-the-earth whites don’t symbolize multicultural America; they represent its bigoted past. So liberal interventionists replace them with POC in their cherished myths.

Blinken and those like him can’t celebrate the Scots-Irish Indian fighter or the WASP Union officer. For one, their ancestors weren’t in America at these times and this is foreign history to them. Two, those figures represent the white America they want to replace. The only soldiers they can relate to are those who uphold their own delusions about America. Black soldiers played a negligible part in World War II, yet our current mythology imagines they were the key to victory. In the future, we will dig up all different kinds of minorities and claim they won the war. White Americans couldn’t do anything without transgender Latinx leading the way.

Throughout his career, Blinken has supported every foreign intervention in recent history. Like his boss, he backed the Iraq war. He was a strong advocate for the Libyan intervention while serving in the Obama administration. He also backed U.S. aid to Saudi Arabia’s war in Yemen. He also says the Obama administration failed in Syria: “We failed to prevent a horrific loss of life. We failed to prevent massive displacement of people internally in Syria and, of course, externally as refugees. And it’s something that I will take with me for the rest of my days.”

That last statement indicates he wants to take America further into Syria to take out Bashar al-Assad. Blinken doesn’t want to live out his days with the guilt of not handing Syria over to al-Qaeda. He wants to play the rescue tanker for millions of Syrians who allegedly cry out for Western salvation.

Everything in modern American society is a replay of World War II. Trump is Hitler. Antifa are just like the boys who stormed Normandy — or they’re just like the Nazis. The 2020 election was a battle against “fascism.” Lockdowns are fascist. A few years ago, Obama was Neville Chamberlain for not striking Syria and Iran. A few years before that, everyone who criticized the Iraq War was Neville Chamberlain. Meanwhile, Iraq War critics saw George W. Bush as the new Hitler.

World War II is our society’s only historical reference point. It completely overshadows the Civil War and the American Revolution. The “Good War” myth is subscribed to equally by neoliberals and neoconservatives alike and animates their worldview. America is an eternal war with Nazis and we can never rest until the whole world cherishes the Hamilton musical.

It’s why a cabinet nominee cites a farcical Holocaust story during his official announcement. It signals his devotion to our one binding national myth and his family’s involvement in it.

Blinken fits in perfectly with Biden’s possible cabinet. Even though the former vice president pledges his cabinet will look like America, the majority of his nominees, like Blinken, are Jewish. But maybe that doesn’t matter. What matters is that they believe in a multiracial America that can make the whole world just like us.

« Ibram X Kendi’s How to Be an Antiracist

» Counter-Currents Radio Podcast No. 303 Millenniyule, Now More Than Ever