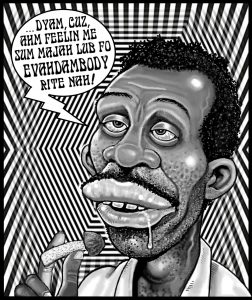 Imagine repeatedly dosing yourself with the most potent psychedelics known to mankind and still seeing the world entirely in black and white.

Were you aware that BIPOC (Black, Indigenous, and People of Color) have used natural psychedelic substances as psychological healing agents for thousands of years, only for the white man to barge in and muck up everything like he always does?

Not only did the white man appropriate the magic mushroom from some poor little Mexican woman in the 1950s — he used his evil powers of tricknology to synthesize psychedelic compounds such as LSD and MDMA.

Sure, the latter achievements somehow eluded the Noble Indigenii for all those thousands of years they were yanking psilocybin mushrooms from the ground, tugging peyote buttons off of cacti, and scraping root bark from the iboga tree, but an emergent body of research dares to suggest that perhaps BIPOC worldwide were dealing with PTSD from white colonization and were thus frightened from indulging in psychedelics.

An article called “INSIDE THE MOVEMENT TO DECOLONIZE PSYCHEDELIC PHARMA” states that “For many people of color, the association of these drugs with violence and incarceration is deeply ingrained.”

Mind you, intergenerational racial trauma and the looming threat of incarceration somehow never scared blacks away from shooting heroin, smoking crack, or wantonly indulging in any other known intoxicant, but groups such as the People of Color Psychedelic Collective are out there asking the tough questions such as “How does cultural appropriation show up in the psychedelic world?”

A 2018 “research paper” with the title “Inclusion of people of color in psychedelic-assisted psychotherapy: a review” blames affluent white hippies for the fact that black usage of psychedelic drugs is statistically low rather than, oh, the fact that these are the people who invented voodoo and would probably start hallucinating demons in Klan hats after nibbling on half a mushroom cap:

Currently, the dominant, pervasive image of the psychedelic community is White affluence. This is not only due to the prohibitive costs and lack of access to psychedelic substances but also the glorification of 1960s/1970s White hippie drug use as a “counterculture” rather than an illicit act. The White washing [sic] of psychedelic drug use has unfortunately spread to medical research, as we find extremely low rates of participation by people of color in psychedelic-assisted psychotherapy studies and a lack of generalizability of these studies to critical clinical issues for people of color.

Almost in spite of itself, the same paper admits that “African Americans report a significantly stronger ethnic identity than European Americans,” a fact that I’m not disputing but that severely undermines this intensely tiresome narrative of unending white racism and violently blind white groupthink.

In my hard-knuckled all-white milieu of suburban Philly in the 1970s — the decade where America was most shamelessly immersed in drug use both legal and illicit — the common wisdom was that black dudes avoided taking hallucinogens because such substances hold a mirror to the soul, and black identity is grounded in the strict avoidance of all forms of self-reflection and the incessant blaming of forces beyond their personal control.

It’s good to learn — rather, to be lectured — that due to things such as slavery and the Tuskegee Experiment, blacks shunned psychedelics for fear of incarceration, despite the fact that such drugs are by far the hardest to detect and easiest to conceal. Things suddenly make a lot more sense when you realize that we now live in a world that refuses to make sense.

It’s also, like, not a total bummer trip to realize that at least a sliver of the nearly $30-trillion national debt goes to funding National Institutes of Health-funded studies with titles such as “People of color in North America report improvements in racial trauma and mental health symptoms following psychedelic experiences.”

Published on December 10, 2020, that landmark slab of racial propaganda masquerading as social science laments that “There are no studies to date documenting the results of using psychedelics for racial trauma” before boldly announcing that “This is the first study to examine symptoms of traumatic stress, depression, and anxiety among those who have experienced racial trauma and whether the intensity of such symptoms can change after using psychedelics.”

Permit me to be unforgivably white for a moment so I can dissect precisely how unscientific this “study” was:

So as a result of confining the study to people who stated with absolutely no evidence that they were black, had been racially traumatized as a result of being “treated unfairly,” and claimed that ingesting psychedelics had lessened the sting of the white man’s lash, the “researchers” boldly concluded that psychedelics may help black people overcome racial trauma.

According to Alan Davis, one of the study’s co-authors:

Their experience with psychedelic drugs was so powerful that they could recall and report on changes in symptoms from racial trauma that they had experienced in their lives, and they remembered it having a significant reduction in their mental health problems afterward. . . . This was really the first step in exploring whether people of color are experiencing benefits of psychedelics and, in particular, looking at a relevant feature of their mental health, which is their experience of racial trauma. This study helps to start that conversation with this emerging treatment paradigm.

Something tells me that a lot of people smell money in this “emergent treatment paradigm.”

But cutting through the swampy reeds of social-justice psychobabble, if putting the coons on shrooms calms them down to the point where they stare at their fingernails or stare at pictures of unicorns on their smartphones instead of raping and burning and murdering with abandon, I see nothing wrong with letting 40 million new Jimi Hendrixes bloom. Assign them 40 million self-hating white social workers as spirit guides, and force them to deal firsthand with the inevitable Big Bad Black Trip.