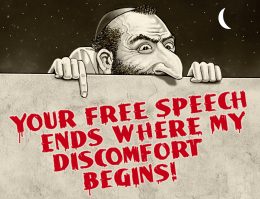 The nights grow long and dark and cold. I’ve often suspected that Thanksgiving and Christmas and New Year’s are merely three sedatives we administer ourselves to collectively brace for the gaping black icy void in the months that follow when the sun never seems to shine and the plants refuse to grow.

The black community — they actually have one, unlike the whites — is allegedly “outraged“ that Donald Trump’s team is requesting vote recounts in predominantly black cities. Charles Anderson is a plump, walrus-like Negroid who serves as executive director of the Urban League of Detroit, an organization that despite its name doesn’t serve the interests of everyone who lives in cities — only the black people, because black people are allowed to have organizations that explicitly serve their interests. Anderson blames Trump’s demands for recounts on — drum roll — white supremacy:

It is a way to create this aura that something went wrong in this election, to play to an audience that is hyped up on white supremacy. They need to understand how did this happen? How did our savior lose? . . . And the answer is, as the answer always is, “Those Black people stole it from us.”

To keep the urban primates from getting upset again — because we’ve all seen how they behave when upset, and even the FBI was recently forced to admit that they commit “hate crimes” at a rate twice their quotient of the population — Richard Stengel, “the point man on state-owned media for Joe Biden’s transition team,” claims to have spotted a “design flaw“ in the US Constitution that may require “new guardrails” to protect easily upset minorities from speech that may easily upset them.

Stengel served as Under Secretary of State for Public Diplomacy and Public Affairs under Barack Obama. Stengel is Jewish. So was his predecessor, as was his successor, Steve Goldstein. What are the odds? Actually, I did the math — the odds that three people who come from a group that comprises only 2% of the population consecutively occupying the same high-profile federal job are one in 125,000.

But apparently Richard Stengel wants to construct some new guardrails that make it illegal to notice that. Under Obama, Stengel said he had no pangs of conscience about being a propagandist:

My old job at the State Department was what people used to joke as the chief propagandist job. . . . I’m not against propaganda. Every country does it, and they have to do it to their own population. And I don’t necessarily think it’s that awful.

In a 2017 op-ed about why America allegedly needs a hate-speech law, Stengel said one of the main reasons was so that Muslims don’t get upset:

Even the most sophisticated Arab diplomats that I dealt with did not understand why the First Amendment allows someone to burn a Koran. Why, they asked me, would you ever want to protect that? . . . It’s a fair question. Yes, the First Amendment protects the “thought that we hate,” but it should not protect hateful speech that can cause violence by one group against another. In an age when everyone has a megaphone, that seems like a design flaw. . . . Speech doesn’t pull the trigger, but does anyone seriously doubt that such hateful speech creates a climate where such acts are more likely?

Yes, I seriously doubt that. Allowing people to air their grievances lets them feel, even if they’re dead-wrong, that at least their very existence is being tolerated. But if you suffocate them to the point where they can’t even say what’s bothering them, they may feel their only recourse comes through pulling a trigger.

In Scotland — where they have apparently been allowing Jews in the country for quite some time now, who knew? — a hairy pickle-face named Ephraim Borowski is employed as the Director of the Scottish Council of Jewish Communities because, again, Jews are allowed to have communities while Scots are supposed to grin and bear it. Borowski takes issue with a recent amendment to a hate-crime bill that required proof of intent before allowing the state to seize that person and place them in a cage as if they were a rabid possum:

“They are given a get out of jail free card because they can say ‘we didn’t intend to cause offence, we were merely asking a question’ about, for example, whether the Holocaust happened.”

In Tennessee, a 94-year-old German man who served as an unarmed concentration-camp guard when he was but a wee beardless youth of 19 is being deported back to Germany for participating in an act of genocide that was so complete, it left Jews entrenched in positions of power throughout the civilized world. Friedrich Karl Berger was dragged out of hiding after his name was recently found on an index card amid the flotsam of a shipwreck.

“After 75 years, this is ridiculous. I cannot believe it,” Berger said. “I cannot understand how this can happen in a country like this. You’re forcing me out of my home.”

Man, when them Jews said “never forget,” they weren’t kiddin’!

Because he’s a Nazi, one of Donald Trump’s swan-song moves last week was to have his administration label any attempted boycott of Israel as “anti-Semitic.” Last Thursday, Secretary of State Mike Pompeo announced that he was committing the State Department’s formidable resources to “countering the Global BDS Campaign as a manifestation of anti-Semitism”:

“We want to stand with all other nations that recognize the BDS movement for the cancer that it is, and we’re committed to combating it.”

Jonathan Pollard, who was convicted of conducting the worst campaign of anti-American espionage in our nation’s history — all of it on behalf of Our Greatest Ally — is now a free man who’s being sent packing on his merry little way to Israel.

Have you ever seen anyone report that the “tides of anti-Semitism” are ebbing, or is this something that always rises? If you remove blacks from the equation — something that, granted, has yet to be attempted in American history — one would almost get the sense that American race relations consist of a two-pronged plan:

It helps that so many whites are willing to criticize themselves.

This week’s requisite “I’m a White Guy, and I Suck” essay comes from a pasty feller named David Todd McCarty, who smeared the pages of the Cape May Standard with a piece called “The Problem With White Men” as if he were using the rag as toilet paper:

More than any other single demographic, it’s infinitely arguable that white men are responsible for the vast majority of America’s social ills. . . . Is their particular dysfunction primarily a product of being born men or white? Historically speaking, you’d have to go with white of course, but being male certainly is closely tied to it. . . . Like a soda cracker in a world of exotic pastries, the straight, white man is both a dominant force in our culture and yet somehow the least interesting thing about it. . . . Pit bulls might be misunderstood creatures but you can’t deny that their very existence, while based on a regretful and shameful past, can nevertheless still be quite dangerous to women and children.

We live in a climate where even pit bulls are insulted by being compared to white men.

As if it weren’t bad enough that the government, the media, and the educational system are in on the fix, now comes the horrifying news that the American medical industry has swallowed the inherent contradiction that race doesn’t exist, whereas “racism” is ubiquitous. The American Medical Association recently issued a statement denying the existence of race but encouraging the medical industry to address the “health inequities” that result through “systemic and structural racism.” According to AMA Board Member Willarda V. Edwards — yes, she’s black, I am quite certain that there has never been a white woman named “Willarda” in the history of the universe:

The AMA recognizes that racism negatively impacts and exacerbates health inequities among historically marginalized communities. Without systemic and structural-level change, health inequities will continue to exist, and the overall health of the nation will suffer.

Part of the AMA proclamation involves the alleged need to recognize “race as a social construct” and to put the kibosh on “racial essentialism.”

Good luck, all you sufferers of sickle cell anemia and Tay-Sachs disease. Your afflictions are all in your head.

This year has been the biggest collective mind-fuck in American history, if not world history and perhaps even in the entire history of the Milky Way and certain unincorporated areas of the Crab Nebula.

This Thanksgiving, me and the missus are going to cook a goose to symbolize the state of America. We are thankful for many things, but not the fact that we still live in the USA.

« Interview with Anthony Coulter, Illustrator of Spencer Quinn’s My Mirror Tells a Story