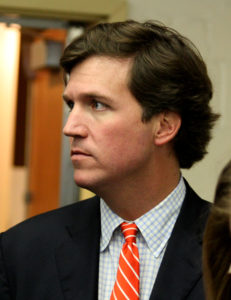 Over the weekend, there was a bit of a buzz around the announced “resignation” of Blake Neff, who worked for Tucker Carlson on Fox News as his head writer. A statement put out by Fox’s management suggested that Carlson would address the issue on Monday. Evidently, Carlson’s writer, Neff, had committed the Orwellian thought crime of “shitposting” on the internet under a pseudonym and had been outed by CNN’s Oliver Darcy. On Monday morning, I decided to do a write-up about the evident failure of Tucker Carlson to stick to his principles; namely, his stated opposition to the “cancel culture” that he rails against frequently on his show. I speculated that he would acquiesce to the mob with a statement of contrition. In light of the statement he gave on Monday’s show, I’ve decided to revisit this drama from another angle.

The Dissident Right has a range of views in regard to Carlson’s show. There are some who believe him to be a “gatekeeper” whose job at Fox News is to prevent sizable masses of white people from crossing beyond the boundary of civic nationalism into the taboo of identitarian and racial politics. It is undeniable that the tenor of his show never threatens to go into such territory. Still, there are many of us who hold the view that Tucker Carlson is more intellectually honest than that, and that his message has been crafted (just as aptly) to keep white people from going further to the Left, while acting as a conduit for liberating some to think more explicitly about their own racial self-interest.

In light of the controversy around his writer and the things he’s been accused of posting under a pseudonym, one thing is clear: this man who has been writing the words we’ve heard Tucker orate each and every weeknight hasn’t been afraid to cross the line in private. Therefore, it isn’t a far stretch to assume that Carlson’s own private views are more nuanced than the milquetoast civnat ideas that Fox management expects him to push.

Having said that, let’s take a look at what Blake Neff has been accused of saying, and then get into Tucker Carlson’s statement on Monday’s show.

Posting on a forum aimed at Law Students called AutoAdmit, Neff apparently made anonymous comments that veered into politically incorrect territory. I think most Counter-Currents readers will empathize with blowing off steam anonymously on the internet. After all, Leftists and POC are given carte blanche permission to openly criticize white people in the mainstream media. Undoubtedly there are many of them who cross (what’s left of) taboo lines of anti-whiteness on anonymous forums as well. Blake Neff’s act of wrongthink was dropping the “N-word,” making some jokes about black men, comments about Asians, and disclosing some personal anecdotes about an ex-girlfriend that some would call “misogynist.”

This wasn’t his real mistake, though. His faux pas was confiding the truth about his identity to someone. This someone ultimately did the dirty work of taking screenshots and forwarding them to Darcy. With all their technology, networks, and dedication, even old-time Soviet KGB would be in awe of the citizen surveillance systems that Woke Culture has created.

As of now, the tentacles of Woke Supremacy haven’t grown broadly enough to infiltrate every individual instance of wrongthink. They don’t need to be. High profile targets like Blake Neff are the equivalent of atomic missiles in the amount of destruction and fallout they can cause. Make no mistake, the day is soon approaching when they’ll run out of the higher-profile individuals, and it will be your own mother who reports your racist blasphemies to the mob. The effectiveness of this strategy has long been proven. Turn everyone against one another, and let the white masses destroy each other. Simple.

What was Carlson’s response?

What Blake wrote anonymously was wrong. We don’t endorse those words, they have no connection to the show. It is wrong to attack people for qualities they cannot control. In this country, we judge people for what they do, not for how they were born. We often say that because we mean it. We’ll continue to defend that principle often alone among national news programs because it is essential . . . Blake fell short of that standard, and he has paid a very heavy price for it.

Then he went on to attack the “ghouls” who are rejoicing in Neff’s demise.

We are all human. When we pretend we are holy, we are lying. When we pose as blameless in order to hurt other people we are committing the gravest sin of all and we will be punished for it. There is no question.

A subtle defense of Neff’s character and humanity while appeasing the people who sign his paycheck, and avoiding the hypocrisy of groveling to the mob.

On the one hand, it was disappointing. One would have hoped for his resignation to be read on live television while smugly condemning the conservative gastropods who call the shots at Fox. This would have been the heroic Tucker Carlson timeline, the one we didn’t get. Solace can be found in the fact that he didn’t flagellate and use harsh repudiating language at his ex-writer. One can get the sense that Carlson had no hand in the decision to fire Neff (let’s face it, that’s what a resignation means) and probably went to bat for him.

Still, I have to close this report with a call to action for Tucker Carlson, in hopes that he’ll fully live up to the big ideas that he expresses each weeknight on his #1 news show.

Mr. Carlson, you work for a company that put you in the position of being seen as a hypocrite. We all understand that the platform that Fox News provides you is incomparable, but we live in an era where corporate media must be destroyed in favor of honest, independent media that gives all ideas and voices a fair hearing. You are widely loved and invited into the living rooms of millions of Americans each weeknight. Like Roosevelt and his fireside chats, you’re a trusted part of these people’s lives.

I, and thousands of other dissidents, are calling for you to break ties with Fox, create a new political party, establish a new media platform on the internet, and build your support for a presidential run in 2024.

Most of us understand that your heart may not be completely sympathetic to “White Nationalism.” That’s less important than your obvious opposition to the anti-white rhetoric and biases that contaminate our culture. You are not Obi-Wan Kenobi, and we aren’t Princess Leia, but you offer us a thread of hope that America can be salvaged. If you are the man of principle you appear to be, I can only hope you give this some thought while you take your vacation. I’ll leave you with that suggestion and a debt of gratitude for what you’ve accomplished, come what may. Thank you.

« A Case for Optimism