The Flag Above Me 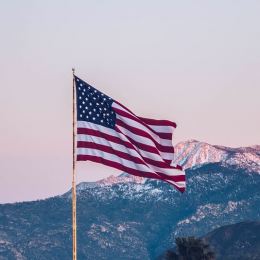 I’ve spent the last few days contacting friends in order to make plans for my upcoming birthday. I always try to make my birthday memorable, whether it be with a group of friends or by myself. Last year’s birthday was one that I would never forget, as I found myself singing a Polish folk song in a restaurant in Iceland while Antifa was burning an American flag directly outside. How did this all come about? Let’s find out.

I was living in Eastern Europe and hadn’t seen my mom for over a year, so I came up with the idea to fly her out and meet her in Iceland where we would celebrate both of our birthdays together. Unfortunately, she got sick once she arrived, so we had to change most of our plans. Despite being sick, my mom still wanted to take me out on my birthday, so we decided to go to an American-themed restaurant near our hotel as it was close and not very crowded. We also thought it would be fun to see what an American-themed restaurant would be like in Iceland. I was hoping it would be over the top, and I wasn’t let down.

There were American license plates on the wall from all 50 states, along with pictures of American actors, athletes, and celebrities. The music playing in the restaurant was mostly 80s pop hits, with various American-themed songs on rotation, including Don McClean’s “American Pie,” Toby Keith’s “Courtesy of the Red, White and Blue” and Lee Greenwood’s “God Bless the USA.” There was also a huge American flag that covered an entire wall. Naturally, the menu specialized in American food and drinks, particularly burgers and ribs. I know it’s better to try local food when traveling, but with my mom sick, I wanted her to have food that she was used to digesting.

I had spent the last month studying an Icelandic grammar book so that I could practice some Icelandic at the places I visited. To my surprise, most of the people working in the tourist area were not from Iceland, but from Poland. This was also the case at the restaurant. While I didn’t get to practice my Icelandic, I was able to order our food and drinks in Polish. Instead of the typical happy birthday song, I asked the staff if they would like to sing one of my favorite Polish folk songs with me, “Hej Sokoły.” The staff were happy to oblige and were singing and laughing along with me.

Unfortunately, the mood quickly changed as we started to hear a large group of protestors shouting and blowing whistles outside the restaurant. It turned out to be Antifa. They had brought an effigy of Donald Trump along with a small American flag, both of which they started to set on fire. My initial reaction was anger, as I didn’t want my mom to be bothered by the sight of protestors burning the American flag during our birthday celebration.

The Polish staff quickly came over and apologized for the protestors and the situation. They explained that because Iceland had recently deported migrants and refugees that had committed crimes, various protest groups had staged demonstrations in front of this restaurant. Apparently, these protestors blamed Trump and his supporters for the deportations in Iceland and decided to hold daily protests in front of this American-themed restaurant. Furthermore, the staff explained that these protests had hurt the business of the restaurant, as many customers had either complained or walked out when previous protests occurred. I asked the staff why the local police would let protests occur in a tourist area and in front of their restaurant. They didn’t have an answer, but I could tell that they were holding back from what they really wanted to say.

I thanked the staff for their concern and told them that we would stay and order another round of drinks. The staff recommended we change seats to an area that was isolated from the protestors. So we ended up sitting in a large, comfortable booth underneath the large American flag on the wall.

When I think of the Icelandic flag, I think of the Icelandic people, their grammatically-complex language and their rich literary history. When I think of the Polish flag, I think of the struggles that the Polish people endured in fighting for their land, language, and identity for over 400 years. So being in an American-themed restaurant, it should have been easy for me to identify what the American flag represented. After all, I was surrounded by cowboy memorabilia, Rocky movie posters, California license plates, and Hall & Oates playing on the speakers. Yet when I looked at the flag above me, all I could think about was the demographic displacement of white Americans.

We all know the statistics before the Hart-Celler Act of 1965 when America was nearly 90 percent white. If you accept the most recent census statistics (which clearly underreport the amount of non-white illegal aliens), whites are now around 56 percent of the population. But population statistics are only part of the problem, as the white birth rate has been steadily decreasing and is still below replacement level. White children are already a minority throughout the country, comprising only 46 percent of the entire public school system.

Adding to this situation are the foreign migrants and refugees strategically “relocated” in white communities by Jewish-led NGOs. White Americans were never asked whether they wanted African and Middle Eastern migrants in their towns. They were never allowed to vote on these issues, and anyone that tried to voice their concerns were slandered by the media with all the typical anti-white slurs and accusations.

When the anti-white media or non-whites bring up the statistical evidence of white displacement, they often brag about it as if they were eradicating polio. But when white advocates and nationalists discuss these very same facts they get censored, de-platformed, or accused of spreading “conspiracy theories.” So when I looked up at the American flag in the restaurant, despite being surrounded by nostalgic memorabilia of my childhood, I couldn’t help but be reminded of a nation where white people are quickly becoming a hated minority.

Speaking of my childhood, I can still remember back in my early elementary school days where some teachers would have the class recite the pledge of allegiance to the flag. Yet even as a kid, I clearly remember many non-white kids refusing to say the pledge of allegiance. Some of the non-white kids even tried to vandalize the classroom flag. While these may be anecdotal stories, they remind me that even as a kid I subconsciously realized that it was really only white people that held any type of patriotic sentiment to the American flag.

If you think about it, how can one flag really represent different ethnicities and races? What type of allegiance or loyalty can non-whites have to the American flag or any other flag whose nation was founded by whites? If my white parents migrated to Mongolia and I grew up in Mongolia, would I have any connection to the history of that nation? Would I be considered Mongolian? Of course not. Even if I had Mongolian citizenship and spent my whole life there, I would never be ethnically Mongolian or racially Asian. No flag or pledge of allegiance can ever change that.

My allegiance is not to any politician, political party, or to any government. My loyalty is to my people and to my race. My loyalty is to my white identity. I pledge my allegiance in helping all white nations maintain control of their land, demographics, and sovereignty. I also hope that one day, white people around the world can have a homeland that they can seek shelter and return to, should they ever become persecuted like the Boers in South Africa. After all, shouldn’t every ethnic and racial group have their own land, resources, and sovereignty? Shouldn’t every ethnic group have a flag that represents them exclusively?

As I was leaving the restaurant with my mom, I looked up to the flag above me and saluted it. I saluted all the European explorers that sailed dangerous waters in search of new lands. I saluted all the white colonists who established settlements despite the harsh conditions and hostile tribes. I saluted all the white pioneers that traveled westward despite numerous hardships on the frontier. Most importantly, I saluted the white soldiers (on all sides) that lost their lives in all the unnecessary brother wars. I asked the staff if they ever saw people saluting the large American flag on the wall. “Not many,” the waitress said. “Just people like you.”