A Flash of Dissident Genius in Estonia 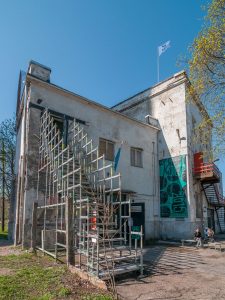 First of all, the actual building and location of the Contemporary Art Museum of Estonia has a great, youthful, Do-It-Yourself aesthetic. It’s informally known as the EKKM (cool). Its entrance is a dirt trail (keeps the art snobs away). It’s located in a small cluster of falling down Communist-era factory buildings (awesome). It’s free (yes!), and its “staff,” if you could call it that, is the art-school dropout kid who runs the café, through which you have to pass to get into it.

There were some art weirdos hanging around the café when I arrived, so I already liked the place before I even got into the museum. I figured out which door lead to the art and went inside. According to the introductory text on the wall, the exhibit was called When You Say We Belong to the Light We belong to the Thunder, which was borrowed from a Pat Benatar song from the 1980s. There was even a video of Pat singing the song on MTV, on a small monitor across from the text. (If you didn’t know, Benatar is currently a cult hero to hipster college-age feminists.) The video was a nice touch, I have to admit.

The text introduction went on to describe the art that followed as representing “the psychological reactions to climate chaos and the geographical imagery used for how we imagine inhabiting the world.” There was more stilted prose, but I will spare you. Near the end there were the usual mentions of “inclusion,” “diversity,” and my new favorite term: “environmental racism.”

It is interesting to see how fast the artistic community in a country like Estonia adopted Western-style Left-wing artistic rhetoric. This country just got done with brutal artistic repression thanks to the Communists. That was just thirty years ago; their parents still remember it clearly; their aunts and uncles still have their bootleg Sex Pistols cassettes; and here they are, putting similar mind-control restrictions on themselves and their fellow creatives. Only art that addresses our issues will be allowed.

The problem is, what if a talented young artist doesn’t feel like addressing “environmental racism” right now? What if he or she wants to talk about something else? Too bad. This is what we are talking about. If your art is about something else, you won’t be in the exhibit. And your refusal to participate will be noted.

So I went in. The first piece was a transparent plastic suit, that stood up like a person, with real shoes where a person’s feet would be. This suit had a skeleton of a dead animal at its feet, I guess to qualify it for the environmental theme.

The next piece was bad video of something on fire.

The next piece was a wall-sized projection of a 37-minute video showing different native fishermen on the Amazon river, catching fish and then comforting them as they died.

Yes, I know. Very strange. The piece is called “Fish.” You watch an amateurish video, of a real native Amazonian kid, paddling his primitive canoe through the jungle. He catches a big fish, wrestles it into the bottom of his boat, finally subdues it, and then as it breathes its last gasps, he holds it to his chest, talks to it, strokes it lovingly, and comforts it as it dies.

I was like what the fuck? I kept watching. A very old fisherman guy, boney and naked, does the same thing. He catches a fish, lets it flop around for a while, and when it is near death, he holds it like a child and whispers to it as it dies.

Later another patron, someone familiar with this piece, told me this wasn’t real. The artist told the fishermen to do that. It wasn’t a weird earth-centric ritual that Brazilians actually do.

Okay, so then, what was the perspective of the piece? Was it supposed to be funny? Was it sincere? It didn’t seem possible that it could be a sincere expression of sorrow for the fish. It was too weird!

What it looked like to me was a mockery of the theme of the exhibit. It was showing the absurdity of trying to “love” the earth and to “love” all the chickens, pigs, and fish we have to kill to survive. The artist, Jonathas de Andrade is Brazilian. He’s represented by a Brazilian gallery, not a New York gallery, which is significant. Who knows what goes on down there. The real Brazilian art people probably hate the powerful New York super-progressive gallery establishment. Brazil might even have, gasp, non-leftist artists!

I was very excited by this piece. To me, it felt like a giant fuck you. It made me think: are the real artists starting to rebel? Are they beginning to throw wrenches into this politicized “artistic community” everyone has to bow down to? This piece was crazy. And the wildest thing was, the fish in the video were really dying. Right in that moment. And the fishermen were really holding them, and stroking them, and whispering to them. This was an extremely moving act to see, faked or not. It really made you think. Whatever else it was, it was excellent art. The artist’s name was Jonathas de Andrade. He’s from Brazil.

I moved on, climbing some rusty outdoor stairs to the second story of the dilapidated building. Here there were some elaborate text pieces that didn’t make sense. One of them was about the development of Nationalism. I tried very hard to figure out what it was saying (beside that Nationalism was bad for the environment). But it made no sense. Translation problems. And this kind of stuff typically doesn’t make sense anyway. Fucking visual artists trying to do political text. Good luck with that.

So then I went into a dark room where there was a voice talking and a light bulb hanging over some scribbled-on playing cards. The voice text was whiny and inane. It was an American artist. It sucked.

In a larger lighted room, there was a painting of people in a boat, of different ethnicities, floating on a sea. I swear to god. That’s how tediously obvious these people are.

Next to that, there was another piece, that was pencil drawings of boxes. Pointless. But perhaps the artists was a golden unicorn of some kind. A trans/bi/autistic/Somalian from Iceland or some such.

Then I encountered something that caught my eye. It was a video of a Japanese politician giving a speech in front of the Japanese parliament. He was apologizing for the atrocities of World War Two. That seemed strange. I checked the placard. It said the artist was James T. Hong and the piece was called “Apologies.” The video, I noted, was eighty-five minutes long. “Okay,” I thought. “I’ll watch two minutes.”

I started laughing. Right there within the hushed quiet of the “environmental racism” crowd. It was hilarious, and at the same time also totally subverting the sentimentalist intent of this very exhibition. It showed the insincerity of the politicians and the pointlessness of the morality they were expressing and appealing to.

Later, I came back to watch a little more of “Apologies.” (more Popes, more world leaders, then an old Russian guy in the 1970s saying that “apologies make a country weak”—whaaaaa???? Lol.)

I loved this piece. It should make Hong a star in the art world (it probably already has). On the placard it said he was Taiwanese but he’s probably American (gotta get those diversity points). Googling him I couldn’t find “Apologies” but it’s probably somewhere on the internet and would be worth a watch.

There was more crap after that, including—God help us—some sort of quilt or blanket or “craft art” showing a tree of life, with all the words we like to say nowadays making up the roots and branches: “oppression,” “resistance,” “colonialism,” “respect,” blah blah blah.

Still, two outstanding pieces, in this funky little “museum.” That puts this show in the top 10 percent of most art crap. And it was free. The main thing, it was fun, despite its firm intention not to be fun at all. Thank God for the mad geniuses who sneak their non-conforming perspectives past these useless Communists. I don’t know how these artists define themselves politically. But whatever they are, they’re definitely aware of the stupidity around them, and are taking bold shots at it.