Professor Gottfried Gets It Wrong 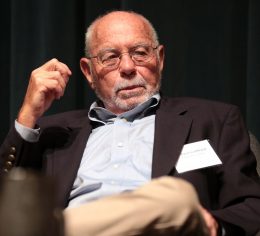 Paul Gottfried is an esteemed scholar who has done yeoman’s work for the cause of the Dissident Right. He deserves our respect, and his words must be taken very seriously. As such, it is with great sadness and a certain degree of trepidation that I find myself in disagreement with Professor Gottfried concerning his article “Resurrecting the Old Right” in the September issue of Chronicles magazine.

The gist of Gottfried’s article is that the Right must eschew not only neoconservatism but also White Nationalism if it is to gain political power; that is, it must return to being the Old Right. It is not entirely clear what Gottfried means by the Old Right, but one can infer that it is something akin to the Paleoconservative Right of the 1990s as exemplified by the Pat Buchanan insurgency of that era.

I believe that Professor Gottfried’s conclusion is both wrong and naïve, and is rooted in the hyperindividualism of Reagan-era conservative thought. Gottfried is dismissive of the Dissident Right’s concern about intelligence as an indicator of civil and social suitability, and accuses the Dissident Right of wanting our society to be nothing more than a meeting of the Mensa Society. Gottfried points out that the problems faced by the United States are the result of the treachery of highly-educated white Leftists who probably have above-average IQs. While he is correct in pointing out that Negroes and mestizos have so little agency that all of the anti-white gains made by those groups have been brought about by perfidious whites, Gottfried overlooks (or willfully ignores) the fact that the Dissident Right’s emphasis on IQ is based on group, not individual, levels of achievement.

Notwithstanding Thomas Sowell, Negroes as a whole are at an intelligence level one standard deviation below that of whites. Negroes and mestizos also have vastly higher levels of pathological behavior in all areas of measurement. Furthermore, Gottfried’s correct assertion that white perfidy is the real cause of America’s decline does not obviate the effects of Negro and mestizo pathologies. Just because white Leftists support decriminalization of feral Negro behavior does not make Negroes any less feral. A white woman who is raped and murdered by a Negro is neither less raped nor less murdered because her rapist was released from prison by the efforts of Leftist lawyers and judges. The savagery of a mestizo MS-13 gang member who chops off a white girl’s limbs while she is still alive is not mitigated by the fact that the mestizo’s illegal presence in the United States has been abetted by Leftist political agencies and “charities.”

What this proves, contra Gottfried, is that race is real and that racial politics is here to stay. Professor Gottfried may not believe in race, but race definitely believes in Professor Gottfried. Leftists may be the Typhoid Mary of our current contagion, but the sequestration of the Leftist agent of contagion will have little effect if the contagion is allowed to spread unabated.

Let the slow cleanse of the Negroes and mestizos begin apace. After the revolution, we can administer Nuremberg-style justice to the white traitors in our midst. A sentimental yearning for the good ole days of Edmund Burke, Calvin Coolidge, Russell Kirk, and Ronald Reagan is just an old man’s lament for his lost youth. I sometimes find myself lamenting the loss of those halcyon days, but then reality obtrudes upon my reverie and I am forced to admit that the Old Right no longer obtains. The Old Right is dead. Long live the Dissident Right!