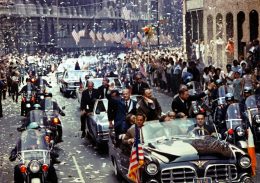 Our goal this year is to raise $100,000 in order to expand our efforts to build a metapolitical vanguard for White Nationalism. So far, we have received 378 donations totaling $54,181.23. We set our goals high because the task we have before us is formidable, but with your help, we will succeed. Even after being cut off from two different credit card processors this year, we have managed to raise more than half of the total amount in under three months. We want to thank everyone who has supported us so far. Please note that, after a brief interruption, we are now again able to receive recurring donations and donations from credit cards outside the US.

If you want to change the world and fight back against Left-wing repression, the easiest way to do that is to make a contribution to Counter-Currents and the North American New Right. The elites don’t want you to do that. They want identitarians not to have serious institutions. They want us consigned to the margins. But, with your help, that won’t happen.

The Dissident Right loves to talk about institutions. We talk about building our own institutions, conducting a long march through those that already exist, and possibly even destroying them.

We know we need institutions to preserve our message and carry it to the masses. Identitarians often imagine creating fantastical things beyond our current capacity. “A Dissident Right FOX News!” “An identitarian third party!” “A based and red-pilled university!” There’s nothing wrong with dreaming big, but we lack the capacity to achieve these grandiose ideas for now.

The good news is that we already have many strong institutions to support and help grow. You’re reading one right now. Counter-Currents has existed for nearly ten years – an impressive feat for any media venture in the Internet Age. Many online outlets, particularly on the Dissident Right, have come and gone since 2010. The North American New Right is still here, and thriving. That’s an achievement in itself.

Identitarian concepts are better-known than they have ever been in North America. White Nationalism has actually become a 2020 campaign issue. The news networks now regularly discuss white identity politics. Major media outlets cover our ideas and broadcast them to the public. (See the recent profile of Bronze Age Pervert in Politico.) White demographic replacement is no longer a fringe topic, but is discussed on primetime television. Anti-white racism is prevalent and can no longer be ignored by normies.

Conservatives are helpless in this new environment. The smart ones crib from us. The dumb and the obstinate close their eyes and hope we can magically return to the George W. Bush years.

We have immense opportunities before us. More Americans than ever are open to our ideas.

But where will they go to find out more? Some normies will stick to the mainstream media and the Southern Poverty Law Center for their intel. But many will seek out the original sources to find out what we really think.

Counter-Currents serves as an invaluable resource for this. When people seek us out, many might think they will stumble upon a poorly-designed Geocities page filled with grammatical errors and crude racial slurs. Instead, they find erudite articles on a wide range of subjects: history, philosophy, esotericism, art, and so on. It’s not the crude caricatures and hastily-scribbled genocide fantasies that the mainstream media portrays us to be. It’s a serious intellectual journal filled with bold ideas and informative analysis.

Many readers came to the Dissident Right because of Donald Trump. But what made them decide to become identitarians were outlets for dissident thought like Counter-Currents. Trump put the ideas for immigration restriction and America First foreign policy into their heads and provided an outline. Then Dissident Rightist publications filled in that outline, offering these curious readers a coherent ideology – something Trump himself could not offer.

Don’t doubt this process. This very writer came to the Dissident Right thanks to places like Counter-Currents. In the aughts, there were no serious Dissident Right publications for an American audience. There were very few places one could find the writings of such thinkers as Alain de Benoist, Guillaume Faye, and other Europeans in English. There were no sites where American writers could express Dissident Rightist views. It was a lonely place for Dissident Right-wingers, who were stuck with a choice between Conservative Inc. rags and crude neo-Nazi forums.

Thankfully, Counter-Currents and other institutions emerged at the dawn of a new decade. This publication offered – and offers – curious readers an alternative to the embarrassments of Conservative Inc. and the discredited extremism of the Old Right. You learn that you aren’t alone in seeing something wrong with the modern world, that the Democratic and Republican parties aren’t the only game in politics, and that there’s a strong Right-wing intellectual tradition outside of Zombie Reaganism. On a daily basis, you can read articles that offer a perspective you cannot find in mainstream publications. This wasn’t something America simply did not have before the Obama years.

Webzines like Counter-Currents laid the groundwork for Trump’s metapolitical moment. The memes shared by shitposters and 4channers were informed by ideas cultivated by the North American New Right. Think about all the big memes: “cuckservative,” “open borders for Israel,” “it’s okay to be white.” These all carried our message to a wider audience, but they were first gestated at places like Counter-Currents.

This is what metapolitics is about: It’s building the ideas that will change people’s minds and change the world. White identity, immigration restriction, and other identitarian ideas are now mainstream thanks to Dissident Right institutions. We are having an effect on the real world and making a difference. Imagine what we could do if our institutions had the resources, funding, and manpower that Conservative Inc. has. Our enemies quiver at that prospect.

But they can’t silence the truth. Political dissidents have survived and triumphed in more trying times than our current situation. We aren’t in FEMA camps (yet), and we will continue to overcome the hurdles they throw before us.

We will only grow stronger. Our institutions will withstand Big Tech censorship and the mainstream media’s attacks. The truth cannot be silenced. And, one day, we will win.

Victory won’t happen overnight. We need reliable institutions to carry on this long battle until our people and civilization are saved. Every Counter-Currents reader can do his or her part with a contribution. We’re in this fight together, and every bit of help counts.

There’s no better way to declare “You Will Not Replace Us” than to see our own institutions triumph in the face of adversity. Please contribute what you can to keep the flame of future victory alive.