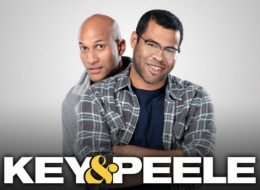 I have always found the best comedy of Key and Peele to be more interesting than funny. They make me think more than they make me laugh, which, I am sure, is an odd compliment for a comedian. Part of this is because they stretch the edges of the Comic-ton Window, so to speak, to determine what should be considered fair game to laugh at. This seems to be a primary interest of theirs.

Take for example their “Auction Block” skit. It’s really a stunner because it makes slavery, specifically, the slavery of black Americans in the Antebellum South, a legitimate object of comedy. One of prerequisites of the Left today is undying piety toward the god of slavery-hate. Left-wing worship of this god is deadly serious, and lefties will not hesitate to invoke its power to infringe upon the rights of those who oppose their political agendas. If you’re black, then you’re an Uncle Tom. If you’re white, then you wish to put into motion events which will ultimately lead to the return of slavery; that is, white-on-black slavery (as if there is any other kind in the eyes of the Left). And since slavery is by (the Left’s) definition racist, it follows that anyone who opposes the Left must be racist as well. Smears of this sort serve not only to punish transgressors but also to act as a sinister form of mind control. Under the intense pressure of political correctness, people will self-censor either to avoid opprobrium or virtue signal.

The Left’s hatred of slavery must always be honed to a razor’s edge since, like Holocaust-hate, it is one of its primary weapons against the Right. By making us laugh at a pair of black slaves from a perspective free of slavery-hate, “The Auction Block” dulls that edge considerably. It’s one thing to make a person who happens to be a slave an object of comedy (after all, anyone can slip on a banana peel or step on a rake). It’s something else however to laugh at a slave within the context of slavery. The former may or may not be considered bad taste by the Left, but the latter always will be. Remarkably, “The Auction Block” makes us laugh at slavery-hate itself and thus takes away much of its power.

So enter Key and Peele, a pair of Negro slaves being put on the block for auction. At first, they act like a couple of mocha-skinned mandingos, mouthing off about how angry they are at being sold like chattel. They issue profane threats of violence and offer the requisite apha-male outrage. They are slavery-hate personified, and at first behave in a perfectly orthodox manner according to current Leftist dogma.

But there is room for a third person on that block, and over time our big-mouthed protagonists cannot help but notice that this person—whoever he is—gets sold while they do not. At first, these are big, strapping guys who would clearly make good field hands. So it’s understandable that the buyers at the auction would select them over Key and Peele. But as less and less strapping slaves begin to get snapped up, Key and Peele quickly abandon their recalcitrance and become offended at the buyers . . . not for being slave owners but for not buying them as slaves! How could they possibly not put a price down for either Key or Peele in the face of such obviously weak competition? With their pride hurt and vanity piqued, the two slaves who moments ago were promising nothing less than open rebellion are now practically begging the men at the auction to buy them. At first they try reason (“What could this dude do? Look at him. . . . Am I wrong? Is he not short? He’s short!”). Then, after the auctioneer scolds them for being a pair of “superficial, bigoted slaves” (oh, irony of ironies), Key and Peele then try to sell themselves as slaves. It’s as if they’re at a job interview:

“My worst quality is that I’m a perfectionist.”

“Not a violent bone in my body.”

For twenty-first century comedy, this is a truly shocking turnaround.

I’m reminded of the 1894 Mark Twain novel Pudd’nhead Wilson in which Negro slaves constantly live under the dire threat of being ‘sold down the river.’ The story takes place in 1830 in a peaceful little Missouri town just south of St. Louis, and the slaves there know that things would be far worse for them in Alabama or Mississippi where they will work you like a dog all day in the hot sun. So you’d better not steal the family’s silver or try to run off because Master very well may sell you down the river. The story itself incorporates quite a few narrative tropes typically found in novels such as switched identities, runaway slaves, a murder mystery, a grand courtroom scene, applications of cutting-edge technology, and amateur sleuthing by one David ‘Pudd’nhead’ Wilson (who happens to be the smartest person in town). While ably put together and rife with Twain’s characteristic wit, the novel certainly lacks the genius found in The Adventures of Huckleberry Finn or The Mysterious Stranger. Still, it’s worth a read, and, for our purposes, provides a great example of slavery-as-comedy as assayed by Key and Peele.

Without giving too much of the plot away, the heel of the story is a light-skinned Negro slave who, by a fortunate coincidence, was brought up as white and free. But he is truly a malevolent person who causes untold harm throughout the story. Thus no one sheds a tear in the end when his identity is revealed and he gets his much deserved comeuppance. And what is his comeuppance? You guessed it. He gets sold down the river. In fact, that’s how Twain ended the novel, with the words “sold him down the river.”

It’s a joke, you see. Twain spilled a decent amount of ink during his story condemning slavery as an institution and ginning up sympathy for individual slaves, but in the end tells us that slavery is what some people deserve. It’s pretty funny if you think about it. Every bit as funny as watching Key and Peele disassemble the Left’s inviolable slavery-hate into the fickleness and childishness of actual Negro slaves. I can imagine a skeptical slave owner at the auction watching these two yo-yos on the block and wondering if they even would qualify as slaves. It’s funny, but only if you don’t subscribe to Leftist slavery-hate to begin with.

Of course, ‘slavery-hate’ in this instance is not the same as being opposed to slavery. The former is an insidious political weapon and the latter a moral conviction. I’m sure neither Key nor Peele actually support slavery (and Twain’s anti-slavery sentiments were quite clear in his day), but by giving us a window of comedy free of Leftist slavery-hate, Key and Peele (perhaps unintentionally) reveal the mysterious vastness of history. I once asked a friend of mine if she thought that she, by virtue of being against slavery, was on a higher moral plane than a Virginia slave owner in the antebellum South. Her answer was an immediate yes. Even George Washington? Absolutely, she said. I then asked her if she felt the same way about Cicero or Plato, both of whom owned slaves. She had no answer to that.

Is a fair-minded slave owner who is kind and generous to his slaves really on a lower moral plane than, say, a sweatshop owner from 1900 who pays his employees a pittance to work in horrid conditions for twelve hours a day? The answer is far from clear.

Different people in different places throughout history have had different concepts of what’s right and wrong, what’s polite or impolite, and what’s acceptable and what’s not acceptable. Sometimes the reasons for this are illegitimate (Stalin’s paranoia, for example, turned a lot of things which were perfectly innocuous into criminal offenses). More often than not, however, such value systems are born out of necessity, both biological and environmental. For example, in places where food is scarce, I’m sure wasting food is considered immoral. And given how Muslim men from the Middle East and North Africa have difficulty controlling their violent sexual urges when placed among scantily clad women and girls, we begin to see the wisdom of the burka and the hijab. Among such primitives, it makes sense to equate female immodesty with immorality.

These days, however, the Left’s slavery-hate is not born out of necessity. Blacks are not in any danger of being enslaved by whites anywhere on the planet. Rather, slavery-hate springs from the need for power. The Left determines what’s funny and what’s not based on its political and ideological interests, and it has enough deep pockets and useful idiots to ruthlessly enforce these interests. Recently Roseanne Barr likened former Obama advisor Valerie Jarrett to a character from a Planet of the Apes movie, and her network immediately cancelled her show, which may cost them almost $1 billion in revenue. That Jarrett really does resemble this character (and is vile enough to deserve such a comparison) doesn’t matter. A few years ago, comedian Michael Richards told some mean-spirited jokes about blacks while dealing with a pair of black hecklers, and his career never recovered. Even as far back as the late-1980s, sports commentator Jimmy the Greek saw his career flame out because he thought it would be amusing to give a perfectly reasonable (yet apparently slavery-hate-free) explanation for black athletic ability. He died a broken man less than a decade later.

With “The Auction Block,” Key and Peele have shown us that it is possible to challenge the racial dictums of the Left. Yes, they’re black, so the Left gives them more leeway. But with more and more whites becoming red-pilled to the realities of race, this will matter less and less in the future. For the way many black people act these days, they deserve ridicule. Eventually, the illegitimacy of the Left’s slavery-hate will be exposed, and whites will be free to make jokes about black people again. And it won’t matter if the jokes are funny.

» The Masculine Preconditions of Individualism, the Indo-Europeans, and the Modern Hegelian Concept of Collective Freedom