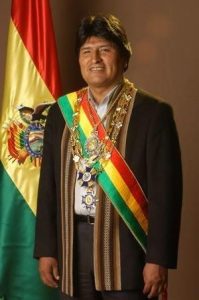 Despite the domino effect of the collapse of socialism across the South American continent in the twenty-first century, one regime (notwithstanding Venezuela) keeps going without showing any signs of stepping aside. What is the key to its strength and why has it not suffered the same fate as its neighbors?

Furthermore, why do I call it the penultimate and not the last socialist regime? Because it’s noticeable that Venezuela also persists with a failed style of government, which makes it possible for Bolivia to avoid the dishonor of bearing this title. Furthermore, no one knows which of the two regimes will fall first, but the Bolivian situation seems to imply a fertile situation for change, more so than in the Venezuelan case, because there is more freedom for dissent in the former.

On the other hand, unfortunately, South America’s turn to the Right doesn’t represent any hope for those who defend Western culture and tradition. The rise of Temer, Macri, Piñera, and others can’t bring anything good for the true values of our civilization. These presidents are what we could simply call “cuckservative leaders.” They can’t commit to laudable goals that seek to defeat the Far Left and its regressive policies.

Anyway, there are still two babies who won’t give up their lollipops: Nicolás Maduro and Evo Morales. While Maduro initiated a great crisis in Venezuela and came to dominate many branches of power, Morales doesn’t seem to have everything under control, but the results don’t look too damaging for him, either.

This could be a perfect excuse for the progressive Left, which continues to insist that “Communism (sorry, the ‘Socialism of the Twenty-First Century’)[1] works.” This is clearly evinced by the fact that some Leftist intellectuals see Maduro as an example of what to avoid and Morales as a model to emulate. Others prefer to see both as saviors, without making a distinction between their successes and failures.

Pictoline, one of the most widely-cited Latin American news sites, seems to be against Maduro but in favor of Morales. Its content in relation to Venezuela maintains a partisan point of view, but not so much in the case of Bolivia. In 2016, during the water crisis in the city of La Paz, Pictoline published an image in which it downplayed the Bolivian opposition and exempted the government from blame. This wasn’t necessarily incorrect, since reality is complex. However, some ideological tendencies can be deduced from this affair.

Others, who were not as intellectual but who had an influential opinion, such as Diego Armando Maradona,[2] still can’t distinguish between what Morales and Maduro represent. Even Pablo Gentili, who promotes Marxism in Latin America’s social sciences, doesn’t condemn the Venezuelan regime. That is why there now seems to be tension among the progressive Leftists, who have a weird fetish for hating the rich and lionizing the poor.

Morales’ triumph and its counterweights

On January 21, El Deber, a well-known Bolivian newspaper, summed up in infographics the points for and against this indigenist leader throughout his twelve years in power. Likewise, there is consensus in the country regarding the positive work done by the regime of his Movement for Socialism (MAS) compared with previous governments. However, the President now wants to be reelected, and there have been other matters that have stoked the population’s rage as well.

To work on a comparative analysis between the Bolivian case and its neighboring countries would require an expert in this topic and more space than an article affords. However, it can be said that Evo Morales achieved what his neighbors did not: the rise of nationalism.

To begin with, it’s necessary to recognize the negative side of that nationalism, such as the supremacy it affords to Andean culture (Aymaras and Quechuas) over that of the lowlands (Guaranis, Ayoreos, Moxeños, etc.), or the contempt it has for what the colonial era represents (despite the long list of contributions made by the Spanish Empire to the continent). Evo Morales boasts about the achievement of greater inclusion of indigenous people in the country’s political life, but what he doesn’t say is that, for years now, only those who share his political views have benefited.

One of the symptoms of this division is the conflict among the inhabitants of the TIPNIS (Isiboro Sécure National Park and Indigenous Territory), who are polarized between supporting and rejecting the building of a highway that crosses their land. There is also the conflict in Achacachi, where opinion was split on the position of Mayor Édgar Ramos, who was a member of the MAS and who was accused of corruption. Around this issue, the idea that every person of indigenous origin was in favor of the President collapsed.

Nonetheless, it’s clear that indigenist nationalism was the main reason why the MAS was able to stoke the enthusiasm of the masses for its ideological project. In the end, who better to represent Bolivia than an Amerindian man, instead of “gringos” such as former President Gonzalo Sánchez de Lozada? Besides this, there was also a powerful revision of the State’s image, which made use of Andean symbolism in its ministries and institutions.

As journalist Gary Áñez’s analysis indicates, the MAS is currently the only Bolivian party with a clear and structured ideological project. The opposition’s inability to unite greatly assists the MAS’ “capacity to govern,” if that is what we should call it. The problem emerges when this project is orientated incorrectly, towards a demonization of the West and a political inclination destined to failure: Marxism.

The Bolivian government doesn’t apply the principles of Marxist socialism (which only works on paper, by the way), to such an extent that many call its style (and rightly so) “state capitalism.” Its ideological orientation is more evident in its approach to culture, and here is where the application of Cultural Marxism arises. Gender ideology and feminism are being discussed in Parliament and in institutional propaganda every so often.

However, where does the ability of the MAS to create a “project of the people” originate? Maybe part of the answer lies in its Falangist past. Throughout history, Third Position movements have demonstrated a worldview that is better defined than that of its enemies. The Party was born as the Movement for Unzaguist Socialism (MAS-U), which is why it inherited the blue color and the principles of the Bolivian Socialist Falange (FSB),[3] which had Óscar Únzaga de la Vega as its most important leader.

The Party doesn’t deny its past, but conceals it more than does its Argentinian equivalent: the Justicialist Party. For the Kirchner couple,[4] reinventing a successful figure of the past such as Perón was a strategy that helped them win power. Ironically, Perón was an anti-Communist President. In the same way, Únzaga, the founder of the FSB, was strongly against Marxism, but the MAS was very wise to ignore that and has instead focused on indigenism as its political doctrine. No Catholic convictions are allowed, and no Falangism, just more Pachamama[5] and Twenty-first Century Socialism.

It seems that this weird combination of capitalism, Communism, and Falangism/fascism is part of a global trend that might help us to understand the principles that unite both Left-wing (Morales, Maduro) and Right-wing (Putin, Modi) leaders. It’s the Fourth Political Theory, and it seeks to take elements from each one of the three primary ideological currents in order to apply them and see what happens. Regardless of whether or not the Socialism of the Twenty-first Century takes part in this way of thinking, we have already witnessed its economic failure in Venezuela and Argentina, among others places. Bolivia may not have suffered a complete economic failure, although it did in other areas, such as education and justice.

The referendum that was held on December 3 to elect a new judiciary triggered strong protests across the whole country because it was viewed as a political show to distract people from real problems. The rage came in the form of drawings and other messages of rebellion on the ballots. Discussion of a new criminal code also enraged some people, most of them doctors. This initiated protests that lasted for several months. This, along with overpopulation in the prisons and corruption and bureaucratic delays in the justice system, also sparked anger against the government.

In terms of education, although the MAS tried to reform the system, the monster of Cultural Marxism made its biggest appearance there. For some years now, new textbooks have been distributed. They elevate the indigenous worldview and deemphasize the European one under the pretext of promoting “diversity in beliefs,” which is the basic idea of moral relativism.

Moreover, there are new institutions with suggestive names, such as the Anti-Imperialist Military School, the Hugo Chávez Frías School, and the Ernesto “Che” Guevara School. Finally, Bolivia doesn’t participate in PISA tests, which determine the quality of education at a worldwide level. Curiously, the progressive Leftists in the Bolivian opposition ignore the educational implications of indigenism, because although they reject the MAS, they approve of its ideological principles.

Nationalization, industrialization, social inclusion, and economic growth are some of the successes of the current Bolivian government, which are sometimes recognized even by those most strongly opposed to the regime. What is clear, and what will define the country’s future, is the sharp disapproval of the citizens for a fourth Morales presidential term. He already won the elections in 2005, 2009, and 2014. The last was the year in which he announced that, when his term was finished, he would go and run a restaurant in the Chapare region. It seems that he has forgotten his promise, and he is now trying to cling to power, because “the people want [him] to stay.”

Fortunately, there are more and more people who have awakened to what the MAS government represents to the country. Marches, strikes, and civil disobedience have proliferated in recent months to oppose Morales remaining in power. For now, this citizens’ movement lacks a political orientation. Will it incline toward the progressive Left, akin to Hillary Clinton’s? Will it advocate for an “alternative Right,” such as Donald Trump’s? As time goes on, we’ll know. The only thing that is certain now is that we understand why Evo Morales is where he is, and that there’s only one thing left to know: how and why he will fall.

[1] Socialism of the Twenty-first Century is an ideology that was first coined in the 1990s and has gained currency in many Latin American political movements, which cites the failures of both capitalism and twentieth-century socialism and calls for a type of socialism that puts greater emphasis on social justice causes and democracy, making it in some ways akin to the socialism of present-day Western Europe.

[2] Diego Armando Maradona (b. 1960) is a retired Argentinian professional football (soccer) player and current manager, who is regarded by many as the greatest football player of all time.

[3] The Bolivian Socialist Falange was a fascist party modelled on Italian and Spanish fascism, founded in 1937.

[4] Néstor Kirchner, who served as President of Argentina from 2003 to 2007, and his wife Cristina Fernández de Kirchner, who was President from 2007 to 2015, espoused an ideology of Left-wing Peronist populism.

[5] Pachamama is the Earth Mother in the pagan religion of the Andean people.