The Enemy in the House 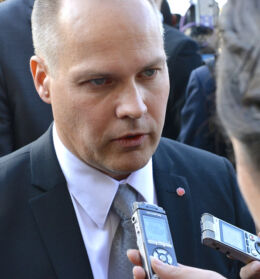 Morgan Johansson, Sweden’s Minister for Migration and Asylum Policy. Sweden has the highest percentage of immigrants in Europe.

An Arab proverb warns that it is better to have a thousand enemies outside the house than one inside. For Europe, it is too late. Worse, the enemies inside the house were elected.

Relentless, government-sponsored Islamic immigration into Europe for more than half a decade means that Muslim attacks on the indigenous population are now part of the rhythm of European life. Knife attacks, rapes and gang rapes, vehicular attacks, bombings, church-burnings, the murder of priests, and the taking over of public spaces are all a part of the occupation of Europe by young, fit Muslim men. This cannot be gathered from the mainstream media, however. Europe may be a battlefield, but the war correspondents are looking the other way. It is only dissident and heavily-censored websites that provide the information the European Union would rather you didn’t read.

European governments use exactly the same methods we’ve seen before in America after an attack carried out by an approved victim group. First, disassociate the attack from its obvious ideological cause, then sanitise any media reports, and finally, deflect attention to the real threat, which is from “far-Right extremists.” And so, instead of recognising that Muslim immigrants increasingly and violently run European towns, Der Spiegel reports that the government is employing 151 “specialized coaches” in German schools to fight “extremism, hate, and misanthropy,” while the main causes of those three evils are hidden in plain sight.

The current reign of anarcho-tyranny is having predictable effects which will only increase the problem. Whereas inner-city Americans are now faced with the prospect of having the police defunded and “re-imagined,” the EU nations have had problems keeping the numbers of police buoyant for some time. American police have been resigning in increasing numbers ever since George Floyd overdosed, but this is one cultural phenomenon where Europe got there first. The number of Swedish police officers leaving the force has been increasing for a decade. The Swedish media usually say this is because of pay disputes, but obviously there are other factors. Sweden is becoming not just the rape capital of Europe – which was unthinkable 25 years ago — but the hand-grenade capital too. Even the BBC reported on the gang-related use of explosives in Sweden in 2019, so something must be going on.

Anyone calling attention to Islamic or Islamist violence in Europe is, of course, vilified. Geert Wilders, the Dutch leader of the Party for Freedom, is under constant police protection, and has just been found guilty — again — of “insulting Moroccans.” Given that a Moroccan drug cartel just executed a journalist, Wilders has a point. Who is insulting who?

Islam operates with utter impunity across Europe. From endless violent assaults to grenade attacks to drug cartels to internecine warfare (because Islam brings its own internal civil wars with it), a mixture of Koranic sociopathy and shariah law is slowly but surely taking hold. Islamic men were recently arrested for slaughtering sheep on the streets of the attractive town of Nantes in France during Eid. This tells you all you need to know in a nutshell.

Another dimension to the problem of Muslim violence in Europe is that it is causing problems for the new “woke” culture, and comes directly from fault-lines in intersectionality that were always going to be under stress when Mohammed met Europe’s LGBTQ community. There have been anti-gay attacks all across Europe, and they tend to correspond to the presence of Muslim immigrants. As Wilders pointed out in his defense of Hungary’s Prime Minister, Viktor Orbán, another politician targeted by the EU for refusing immigration quotas, The Netherlands has been liberal about Muslim immigration whereas Hungary has not. As a result, homosexuals are safer on the streets of Budapest than they would be in Amsterdam.

There is political resistance to mass Muslim immigration across the EU, but the Deep State in each country as well as in the EU want it taken down just as badly as the Democrats and RINOs wanted Trump taken down. Orbán is the most vocal critic, along with the other leaders of the Viségrad Group countries (Poland, Czechia, and Slovakia), and his Fidesz party is actually in power. Go west, and the counterjihad is usually in opposition. Wilders’ PvF in The Netherlands, the Sweden Democrats, Marine Le Pen’s National Rally in France, Matteo Salvini’s Lega Nord in Italy, Vox in Madrid, and others: these are all parties absolutely aware of the Islamic threat. But they are also working against a combination of a globalist EU and the Islamic use of “lawfare,” as well as the outsourcing of censorship to Big Tech. And although schoolchildren throughout the EU are routinely taught about Islamic inventors (even though there hasn’t been much action in that department since the Renaissance), the most effective thing the Muslim world came up with in recent times was the word “Islamophobia.” It strikes fear into the hearts of European politicians.

As for the country that lost two world wars but won the peace, any dissident and opposition party in Germany has to fight not only the incumbent, pro-immigration political behemoth of Angela Merkel’s Christian Democratic Union Party, but also the ghosts of the past. German political parties expressing distaste for a minority group have, shall we say, baggage in Germany. However, the unambiguously named AfD (Alternative for Deutschland) has not minced their words, and Miguel Klauß, a parliamentarian for Baden-Württemberg, nutshells both Europe’s problem and the strategy being used to create it:

More and more, a neglected, migrant milieu of Oriental-, Arab-, and African-born, predominantly male youths are taking over the public space, creating an “unstable security situation” and making life hell for the remaining locals and ancestral natives — until the latter give up and move away.

To control an area is to police it. If the EU elites were flooding Europe with young Muslim men with the aim of policing the indigenous populace, it is difficult to see what they would do differently. After this control of public space, what follows is ghettoization, followed by an Islamic takeover of local councils and prefectures, then the imposition of shariah law. I saw it happen in Tower Hamlets and Newham in London. Whole areas can quite rapidly become Muslim enclaves into which the kufr are increasingly and understandably reluctant to venture.

And even though the UK may have left the EU in the literal sense, Brussels is determined to punish Britain. Hundreds of Muslim immigrants arrive daily on the Kent coast, brought to France by people-smugglers and escorted out of France and across the English Channel by the French Coast Guard. They’re then picked up and taxied to England by a combination of the British Coast Guard and the volunteer-run Royal Naval Lifeboat Institute. Nigel Farage is the only public figure covering this scandal, and is of course demonised by the Leftist junta who run the United Kingdom.

Despite the fact that Britain is no longer in the EU, and so ostensibly free of the Schengen Agreement (which allows freedom of movement for migrants), and despite the fact that this same agreement requires migrants to apply for asylum in the first safe country they reach, Europe’s elites will not forgive Britain — and particularly England — for what they see as treachery. They are happy to dump Europe’s Muslim overspill in Kent, where they are given accommodation, money, and COVID tests — all on the British taxpayer.

And so Europe’s micro-caliphates grow and bloom, and will one day join hands and link arms. They of course bring with them the psychotic violence for which their holy book is an instruction manual. Islam has already got a lot further than the Gates of Vienna in 1683 — and all because of the enemy in the house.