A Strategy for Secret Agents 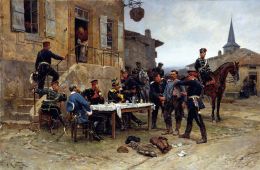 To penetrate the mainstream, we will ultimately need a cadre of dedicated, outspoken activists who openly align themselves with white nationalism. However, most white nationalists are not in a position to be open about their views for various reasons.

Covert white nationalists (or “secret agents”) can still be of great value to the movement, and not only as writers, donors, and community organizers. I will argue that they also have a useful role to play in political discourse.

Being a secret agent need not mean that you stay silent on political matters. You can vocally support policies that further our aims — most importantly, the First Amendment — without making use of explicitly pro-white rhetoric. If you can’t be open about your views, you can at least combat the hostility faced by open white nationalists and support indirectly pro-white policies.

We could use a lot more open white nationalists. But if your options are staying silent and putting up an apolitical façade versus lending indirect support to the movement, the latter is preferable. At the end of the day, we are looking for real-world results, and it does not matter if some of the factors contributing to said results do not arise directly from the white nationalist milieu.

The issue I would focus on the most is censorship. Censorship and deplatforming are among the biggest challenges we face. It would be a huge help if more people spoke out against censoring, ostracizing, and publicly shaming dissidents and openly criticized the culture of groupthink that pervades our institutions.

The beauty of this tactic is that no one can cancel you simply for supporting free speech. Woke Leftists would love to cancel free speech activists, but they don’t because they know it would be bad optics for them.

Secret agents can potentially be more effective critics of censorship than open white nationalists. First, people will be more willing to listen to them, and they are more likely to attract a following. Many people feel ill at ease with woke orthodoxy but are too afraid to voice any objections to it. If a leader in their community presented himself, they might be willing to take a stand also. You only need two or three people to agree with you before you have the makings of a movement.

Second, people suspect white nationalists who defend free speech of having ulterior motives. It is hard for us to look objective since free speech directly benefits us. It helps to have people who aren’t associated with the Alt-Right defend our First Amendment rights.

In reality, of course, most of us are unqualified supporters of the First Amendment (see Greg Johnson’s speech on the subject). The half-educated morons who populate academia love to cite Karl Popper’s Paradox of Tolerance and accuse white nationalists who defend free speech of being two-faced hypocrites, but I don’t know of any white nationalists who are ideologically opposed to free speech except Richard Spencer, who does not even appear to be a white nationalist at this point. We actually are principled opponents of censorship, so “posing” as someone who supports free speech for reasons having nothing to do with being a white nationalist is not all that disingenuous.

Secret agents’ perceived ideological agnosticism can also come in handy in discussions about white nationalism. The simple act of taking an openly neutral stance toward white nationalism helps the movement a great deal. People who take us seriously and address our points in a sober, scholarly manner, as opposed to resorting to name-calling and hysterics, help destigmatize white nationalism and lend us credibility in the eyes of the public. And you can’t be fired for being neutral.

You don’t need to be a white nationalist to make a good case for the necessity of free speech, and this applies to other issues as well. There are serious criticisms one could make of immigration from a non-racialist perspective. For instance, immigrants are often motivated by crises afflicting their countries of origin, and opening the borders to them does not do anything to solve the problems that prompted them to flee their countries in the first place. The architects of white displacement care more about importing cheap labor and displacing the white majority than they do about the welfare of immigrants.

Another tactic you could adopt is to promote feminist initiatives in developing countries. As we know, feminism lowers birth rates, and Third-World birth rates are skyrocketing while white birth rates sink lower and lower each year. If these trends continue, white countries will continue to be swamped by immigrants from the Third World. Promoting feminism for Africans has the added effect of giving you a good alibi.

Instead of openly declaring that white people should have more babies, you can counter some of the arguments that are often brought up in favor of not reproducing. Such arguments are always targeted at smart white people, and smart white people are the only ones who are idealistic and zany enough to buy into them. The most common one is that having children is unethical because it increases your so-called carbon footprint. (In this worldview, children are nothing but fuel-guzzlers and carbon-emitters.) This argument only makes sense if you believe that humans are a plague on the planet and should go extinct. If humanity is to have a future, we will need human smarts and ingenuity to solve the problems we have created. We want there to be more intelligent, environmentally conscious people in the next generation. So environmentalists should be having more children, since they are more likely than average to have children with those characteristics — another way of saying that smart white people should have more children.

The strategy outlined here is especially relevant to people in their teens or early 20s, who have opportunities to engage in political conversations on a regular basis and, I would argue, should refrain from revealing their power levels. If you are someone who wants to be more vocal about politics, I would advise focusing on the free speech issue and waiting two or three years before going public with your views. Young people face fewer consequences for breaking social taboos, but they are also more likely to make poor choices. Even if your convictions are wholly sincere, youthful impulsivity will probably interfere with your judgment. I say this as someone who openly espoused “far-Right” views as a teenager. I was sincere, but I got carried away by the thrill of pissing people off.

In retrospect, my teenaged antics were juvenile and stupid. None of my actions furthered the cause of white nationalism. The drama also consumed a lot of my mental energy. If you are a young person, you would be better off spending that energy on honing skills that would make you useful to the movement and building a reputation for yourself in your local community and in the wider world. It is more difficult to learn new skills when you are older, whereas you can always be an open white nationalist later.

« The Bitch is Back

» Charles Krafft at the 2015 London Forum