The Plymouth 400 SymposiumHow Ellis Islanders Saw Their War Against WASPs 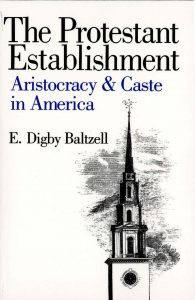 The WASPs can never get any love. Their power once evoked equal amounts of admiration and resentment in American society. Now they’re just a relic and a punching bag for every other group’s ethnic grievances.

The term didn’t exist when WASPs were the comfortable majority of the country. White, Anglo-Saxon, Protestant would’ve described the vast majority of Americans from the revolution to the early 20th century. Typically, the term doesn’t refer to all of those who are White, Anglo-Saxon, Protestant — it’s only meant to refer to elites. People love to attack rural Arkansans, who would technically be WASPs, but few in their vitriol deride them as such. It’s an acronym meant to skewer privilege and power, not hillbillies.

Fittingly, the term came into popularity after World War II when the children and grandchildren of Ellis Islanders were seeking to enter the Anglo establishment. The man most responsible for the popularization of the word was a WASP himself. University of Pennsylvania sociologist E. Digby Baltzell’s famous The Protestant Establishment gave voice to those who yearned to destroy the supposed tyranny of the WASP country club. The book, published in 1964, justified Ellis Islanders becoming the new elite. Baltzell argued his own people are too bigoted to control the reins and they must accept replacement by plucky newcomers. The Protestant Establishment amounts to an argument for why Jews and other Ellis Islanders must replace Baltzell’s people.

His book outlined two different kinds of elites. The one he favored is “aristocracy.”

(1) a community of upper-class families whose members are born to positions of high prestige and assured dignity because their ancestors have been leaders (elite members) for one generation or more; (2) that these families are carriers of a set of traditional values which command authority because they represent the aspirations of both the elite and the rest of the population; and (3) that this class continues to justify its authority (a) by contributing its share of contemporary leaders and (b) by continuing to assimilate, in each generation, the families of new members of the elite. As with the elite concept, I do not conceive of the aristocracy as the “best” or the “fittest” in the sense of the term “natural aristocracy” as used by Jefferson. The aristocratic process means that the upper class is open.

“Caste” is the term he uses for the bad kind of elite. Baltzell defined it as:

\When, in any society, there is an upper class which protects its privileges and prestige but does not continue (1) to contribute leadership or (2) to assimilate new elite members because of their racial or ethnic origins, I shall refer to the process of caste. If an upper class degenerates into a caste, moreover, the traditional authority of an establishment is in grave danger of disintegrating, while society becomes a field for careerists seeking success and affluence. The caste process is the very antithesis of the aristocratic process and inevitably, in the long run if not immediately, leads to the decline of authority and a crisis in leadership.

Baltzell claimed the WASP elites of his day were too caste-minded, too jealous of their power and privileges. He warned that this mentality could lead to the ossification of the American elite. The only way to enter this caste is by blood, not merit. The Ellis Islander elite is an aristocracy, while the WASP old guard is a caste.

His fears, written in the 1960s, were ridiculous then and more hilarious in hindsight. Most of the book, which is considered a classic of American sociology, is devoted to the oppression Jewish oligarchs feel at not feeling fully accepted by WASP country clubs. According to Baltzell, the real power centers of America are these country clubs. Their exclusion of minorities, Jews in particular, presented a grave threat to our democracy. Baltzell’s obsession with anti-Semitism, complete with warnings that 1960s America could produce another Hitler, is bizarre. The WASP dissident was a philo-Semite throughout his life. His New York Times obituary included his praise of Jews as culturally superior to Anglos. ”People talk about what Episcopalians have accomplished and their power, but what Jews have done in the United States since World War II is now the great untold story,” he said in 1981.

The author conjures up an image of WASPs that would be very attractive to Right-wingers. They care deeply about their lineage, culture, and traditions. They fervently oppose immigration and integration. Baltzell quotes one WASP who says the “American people know pretty well that the enemy is Washington as well as Moscow,” indicating the WASP elite hated the liberal lurch of Cold War America. Their institutions stand for the historic American nation against the tides of change and color. The WASPs are a proud elite that want to keep America American.

Unfortunately, they were not like this in real life. The WASPs may have harbored prejudices against Jews, blacks, and others in their country clubs and summer retreats, but they didn’t act on these beliefs. While Baltzell argues the club and fraternity were the real power centers, the Ellis Islanders took over America’s culture and politics. The WASPs were powerless to resist anti-discrimination claims against their enclaves and the subversion of their culture. They were able to make a lot of money and have influence over their immediate surroundings, but they weren’t in control of the country. Moreover, many WASPs, like Baltzell, championed their own dispossession. The author was one of many fellow class traitors who had forsaken their clubbiness to stand with Ellis Islanders. The WASP elite never bothered to justify themselves to the new Americans. This ultimately led to their dispossession.

The WASPs who did engage in politics after World War II were some of the greatest traitors to this nation. Nelson Rockefeller, John Lindsay, and George Romney were all fierce advocates of the Civil Rights revolution and promoted white dispossession. There was no blue-blood reactionary in the political arena at this time. Rockefeller, Lindsay, and Romney were accurate representatives of their class.

In spite of his hysteria over WASP domination, Baltzell essentially admitted these facts. He excoriated his class for not engaging in public service and staying aloof from politics. Of course, the Penn sociologist didn’t want his class to represent Anglo-Saxon interests in politics; he simply saw it as a means to make them open up their clubs to deserving Jews.

Baltzell didn’t offer any examples of the WASP elite resisting change despite their social clubs and fraternities denying admission to minorities. His spokesmen for WASP recalcitrance were all dead by 1964, including such luminaries as Madison Grant and Henry Adams. Even though the book constantly brings up the Nazis and the danger of the WASP caste enabling an American fascism, Baltzell could only muster the example of the Republican Party as an example of Anglo reaction.

Baltzell’s discussions of contemporary party politics sound mostly like Rachel Maddow warning of Republican fascism today. His silly partisanship is exhibited in how he praises WASP class traitors for leaving the GOP in favor of the Democrats. He even includes many remarks on how the Republican Party needs to abandon Anglo-Saxons in favor of diverse America. All you need to do is exchange Anglos for whites, and you have a 2020 MSNBC segment.

Baltzell’s politics as expressed in his work are that of a typical mid-century liberal. He praised the civil rights movement, deplored bigotry, cherished the institutions, and admired JFK. He saw the ascendancy of a more diverse aristocracy in JFK’s election. He, like many liberals, was repulsed by the antics of Joe McCarthy. McCarthyism, in the author’s telling, was an ethnic revolt against the WASP elite. This is a bad ethnic revolt, however. Baltzell comes out as a mighty defender of the institutions and the deserving aristocracy against McCarthy’s ethnic resentment. He was no revolutionary and he stressed the need for aristocracy and WASP norms. He just believed the good things didn’t need the WASPs anymore. The shrill cries about McCarthy undermine the worries about WASP fascism. Apparently, the big threat was from Right-wing ethnics rather than Right-wing WASPs.

The book’s definition of aristocracy appeals to today’s elites. It discards any notions they wrongfully inherited their position and tells them they’re the best of the best. Anyone can join the aristocracy, so long as they have the right stuff. It’s tolerant, inclusive, and liberal. This is an elite that should lead and its authority must be respected. A well-entrenched elite keeps demagogues like Joe McCarthy away from power and gives us the respectable politicians we need — allegedly.

Most importantly, this aristocracy supersedes the Anglo caste and upholds the myth that America is a nation of immigrants. It’s not blood that makes these people better or gives them the right to rule. It’s simply merit.

This is a nice story for our current elite to tell themselves and justify their authority. The bad elites are gone and we now have an elite that’s more representative of the country. Trust the institutions, trust your leaders, and ignore the demagogues who attack them.

It’s unfortunate Baltzell’s work is touted by some on the Right. It is interesting as a historical relic of its time and it does shine a light on overlooked aspects of elite formation and Anglo norms. But it’s ultimately a silly book. Country clubs did not hold cultural or political power during the mid-20th century and the Ellis Islander ascendancy was well underway at that time. The book only validates the grievances and delusions of garment district social climbers. Baltzell tells the Ellis Islander elites that they are the true successors to Lincoln and Jefferson, not the Anglos.

WASPophobia lingers on well past its expiration date. Even some on the Right indulge in it thanks to works like The Protestant Establishment. It’s far easier to imagine the WASPs as the secret puppet-masters of American society than to criticize those actually in power. For all their faults, the WASPs aren’t the ones invading the world while inviting it in.

It’s the elites who succeeded them.

« Counter-Currents Radio Podcast No. 305 Ask Me Anything with Greg Johnson

» 20 Years Since the Murder of Daniel Wretström