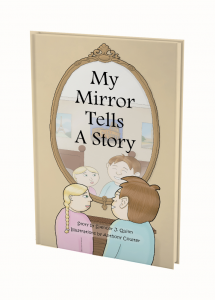 Your children are going to school in what “President-elect” Joe Biden would call a “racial jungle.”

What do you do?

Lucky for you, you have My Mirror Tells A Story by Spencer Quinn and Anthony Coulter from The White People’s Press.

Quinn wrote his story for every child. (He and Coulter even included an easter egg on every page for the littlest ones!) The illustrations are simple and relatable, just like the family. Even the walls and carpet are an agreeable beige. The family displays artwork featuring well-known landmarks of white societies: Big Ben, the Parthenon, and the Eiffel Tower. There’s nothing remarkable about the family specifically. In fact, no one has a name! But maybe that’s the point. No matter what strata of the “jungle” your son or daughter is in, My Mirror Tells A Story is about them.

Sometimes I feel so lonely
Some children are not like me
Their skin is dark, their hair is curly
They behave so differently
They make me scared, they make me sad
My home’s so far away
They are so loud, they are so mad
I want to run away

This is an accurate take. In an inconvenient article titled “NYC’s Most Dangerous Schools,” an administrator at a 71% black high school confides: “The kids run wild, and the teachers are scared.”

It may be hard for the over-30 crowd to relate to this, but public school zoomers will tell you how middle and high school is the best teacher for race realism. Young children, like the boy, will often be more reserved.

Quinn’s story is as much a source of encouragement for little ones as it is a reality check for parents. If your school is minority white, there’s a strong chance your child is being bullied. You may not hear about it since the topic of black-on-white bullying is inconvenient for the oppression narrative. But just because you don’t hear about it doesn’t make the hurt any less real.

The next two pages are a spread revealing the boy’s classroom. If it’s been a good twenty years since your last venture into a public school classroom, the scene may shock you. However, I assure you: This is no parody. The teacher’s eyes are glazed over as she points to the blackboard that reads “Slavery & Oppression.” Portraits of Rosa Parks, Martin Luther King Jr., Frederick Douglass, and even a generic “immigrants” line the top of the blackboard. The text above informs us that these are “American Heroes.”

Discouraged, the boy, back in his comfortable home, opens up to his parents.

I asked my mommy why my teacher
Says we should love them too
She never says for them to love
People like me and you.

The whole family, even the dog and baby (the only thing unusual about the family is that they have three children instead of two), are listening to the boy, concerned.

At this point, we expect the parents to affirm the boy’s identity. They do this, citing the lightbulb (now in question according to “President-Elect”?), the moon landing, and most importantly, the founding of America.

However, what makes Quinn’s book stand apart is that the parents’ advice goes farther than simple affirmation. They tell him to actively seek out other children like himself. Of course, this doesn’t mean rejecting friendship from children of another race, but simply being discerning about the friendships the boy chooses.

Some white parents might feel funny about Quinn’s direct approach. Don’t. It’s a self-defense mechanism. (See black bullying above.) But it’s also natural. Despite a school’s attempts at social engineering, children, uncoerced, will make friends with other kids who look like them.

Nations follow the same logic. The Founding Fathers whom the boy’s parents refer to were white men who founded a country for themselves and their posterity (verbatim). This book is a reminder for the smallest of us that no amount of diversity propaganda can change that fact. And it’s a good thing. No matter where you are, it’s good to be proud of the achievements of your extended racial family. Moreover, it’s ok to be explicit about race. (The book is published by The White People’s Press. You can’t get more explicit than that.)

You have to. It’s a jungle out there.

» The Counter-Currents 2020 Fundraiser Amnesty Your Ancestors