A Low Point for Democracy? 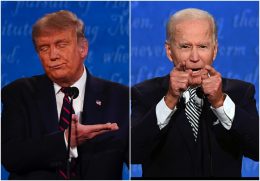 The Guardian dubbed it a “national humiliation.”

Deutsche Welle defined it as a “clusterfuck.”

“[V]voters learned — and learned and learned and learned — that Mr. Trump has nothing but contempt for the values and norms that are essential to democracy: among them, truth, civility and respectful disagreement,” The Washington Post editorial board collectively wrote in a fit of anger. “Mr. Trump’s lies about mail-in ballots were poisonous, and his attacks on Mr. Biden’s family were particularly vile. But the lowest point came when the president would not commit to accepting legitimate election results or to tell his supporters to refrain from causing civil unrest. Instead, he said that he is “counting on” a Supreme Court with a new Trump-appointed justice to ‘look at the ballots.’ He called on his supporters to swamp polling places to look for ‘bad things,’ a recipe for chaos. The violent hate group Proud Boys, he said, should ‘stand back and stand by.’”

Outlets dub Trump’s message as “anti-democratic” because he refuses to trust the experts. These are the same experts who tried to topple him through the Russian collusion hoax, told him coronavirus wasn’t a big deal, and insisted open borders and Left-wing riots don’t spread a deadly virus. No wonder he doesn’t listen to them.

According to liberal elites, democracy only occurs when they have total power and their authority remains unquestioned. Former FBI assistant director Frank Figliuzzi said the quiet part out loud this week when he insisted the Deep State must vet all future presidential candidates to ensure we never have another Trump. The CIA determining presidential candidates is not a threat to our democracy, but interrupting your debate opponent is.