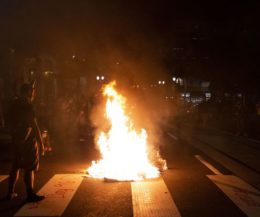 Weimar comparisons are in the air again. Violent street clashes between Antifa and Trump supporters in Portland inspired a new round of historical allusions to interwar Germany. Long a theme within the Dissident Right, “Weimar America” is now making its way into mainstream discourse. Major commentators can’t ignore the fracture of America and its lurch down a dark path. Pundits will blame various sources for this tumult, from Donald Trump to coronavirus to a lack of civility. But all agree the chances of a return to normalcy are unlikely.

Weimerica is here for good.

Journalist Andrew Sullivan claims in his latest column that this era feels “very Weimar.” “The center has collapsed. Armed street gangs of the far-Right and far-Left are at war on the streets. Tribalism is intensifying in every nook and cranny of the culture. The establishment Right and mainstream Left tolerate their respective extremes because they hate each other so much,” Sullivan writes.

Sullivan, a Never Trump centrist, declares he will vote for whoever restores order to America:

If one party supports everything I believe in but doesn’t believe in maintaining law and order all the time and everywhere, I’ll back a party that does. In that sense, I’m a one-issue voter, because without order, there is no room for any other issue. Disorder always and everywhere begets more disorder; the minute the authorities appear to permit such violence, it is destined to grow.

He adds menacingly: “And if liberals do not defend order, fascists will.”

He hopes Joe Biden will restore law and order in America, but Sullivan is wise enough to know Biden is too beholden to the far Left to effectively crack down on the violence. He refuses to see Trump as the great restorer of order; rather, Sullivan sees Trump as the herald of the end of liberal democracy. His hope remains that Biden can restore the center and safeguard liberal democracy for another generation. Sullivan doesn’t offer any ways Biden can do this besides rhetorical condemnations and some outreach to hostile Republicans. The writer doesn’t imagine Biden resolving any of the underlying tensions that lead to disorder. How is the 77-year-old Biden supposed to reduce polarization, social alienation, and distrust in institutions? It’s comical to think he’s the great mediator-in-waiting.

Sullivan’s Weimar comparisons and desire to restore order led liberals and Leftists to brand him a fascist. However, many conservatives agreed with Sullivan’s point about our new Weimar era. “The term ‘Weimar America’ has been bandied about on the Right for a few years, but now, it is less a pejorative description than a neutral one,” The American Conservative’s Rod Dreher writes.

Dreher offered signs we’re living in Weimar based on his reading of midwit favorite Hannah Arendt. These signs are: loneliness and social atomization, loss of faith in hierarchies and institutions, embracing transgressiveness, susceptibility to propaganda and ideology, and valuing loyalty over competence. The first two are certainly true, the third is true for the Left, the fourth has always been true, and the last one sounds like a Never Trumper attack ad. The important point is America is experiencing serious social unrest that now results in riots and general disorder. People feel isolated and don’t trust their leaders. Polarization is at an all-time high and political violence is now a fact of life.

Dreher’s overall conclusion is that America is in a “pre-totalitarian condition.” That may be the case, but it’s not coming from Trump’s direction. The president can’t even get his own staff to follow orders, much less the rest of the country. The totalitarian threat comes from the Left, which Dreher acknowledges. Unlike Sullivan, Dreher sees Trump more as the figure to save us from this nightmare. But he insists that Trump (quite rightly) is an unreliable protector.

Dreher and Sullivan wish for the status quo to return. Many liberal and conservative commentators share their desire and see this time period as especially dire. Hundreds of books have been published on how Trump signals the coming of a dictatorship. Mainstream media outlets regularly warn that our democracy is hanging on a thin thread. Everybody worries over a contested election and many fear Trump will not step down if he loses. Gun sales are at an all-time high while wealthy residents flee the major cities. Millions of Americans remain unemployed due to coronavirus and a quarter of young Americans contemplated suicide during the lockdown.

One election will not put the pieces back together — it will only inflame these divisions and tensions. Riots are all but guaranteed whatever the result of the November election.

The mainstream fretting over Weimerica shows how decrepit our system is. It no longer inspires confidence in those who communicate to the public. Everyone wants a more authoritarian government while each side fears their opponent taking over said government.

Trump is the immediate cause for this. The man destroyed the facade of political civility and inculcated hysterical hatred in his enemies. The intense loyalty he draws from his own supporters is unprecedented and advances polarization. But there are deeper causes that have festered for years. Most readers are familiar with them — elimination of a common national identity, multiculturalism, demographic change, anti-whiteness as state dogma, etc. — but the commentariat doesn’t acknowledge them. It’s much easier to imagine America as a wondrous paradise before Trump poisoned it with his uncivil words.

It’s a bit inaccurate to say we live in an exact replica of Weimar Germany. Despite the toll of coronavirus, the American economy still offers plenty of opportunities and white Americans still feel they can reach the Good Life. Interwar Germans lacked those opportunities. The forces fighting in the streets aren’t the equivalents of the Communist Party or the National Socialists. There really isn’t a communist threat nor the chance of a fascist party taking power. The street violence is mostly inner-city trash and Leftists throwing a liberal-approved temper tantrum. The system isn’t threatened by the violence, but it does diminish the system’s standing with middle Americans.

The trends noticed by Sullivan and Dreher are not good for the American Empire in the long term. A nation that no longer believes in itself or shares a common identity with all of its countrymen is not one destined to thrive. For the historic American nation to survive, the facade of the contemporary American system must be stripped off. The system’s delegitimization is good for waking up ordinary Americans to its injustices and contradictions. The downside is that this may lead to a more authoritarian version of the liberal order that strips us of our rights and identity. A Right-wing dictator is not on the horizon of this Weimar Republic.

The system is failing and the commentariat knows it. The only question is what will come next.