Looking From the Left 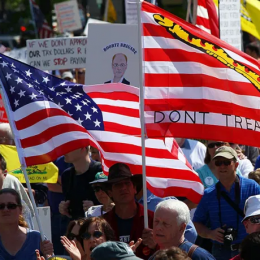 A defining feature of the American Left is its habit of projecting onto others, things it is either doing at the moment or preparing to do in the future. The Opposite Rule of Liberalism is one of those universal truths of our politics. A corollary to that is the Left is always preparing for what it fears the most. In this case, they are signaling that they expect the radicals to win and they expect the white population to notice that they have been reduced to dhimmitude. They are planning for it.

This is something the Left thinks is a possibility, which is why they keep planting stories in the media about Trump refusing to accept the result. It’s why media hacks keep doing hand-wringing concern posts with titles like, “Trump Could Still Break Democracy’s Biggest Norm.” What follows is a call for the military to stage a coup or the CIA to assassinate him. The Left is thinking through how they must respond to a populist revolt in response to their election rigging.

In a world where elections are rigged and white people no longer think they have legal recourse, that old revolutionary spirit could flare up among many. One way that could manifest is through propaganda of the deed, as the anarchist says. This is why the Inner Party is having the security apparatus declare “white supremacists” as the greatest threat to the country. Doing this while far-Left gangsters ravage major cities is a nice touch, but it suggests the Left is genuinely worried about this.

This article originally appeared at the Z Blog.