Enigmatic to the End 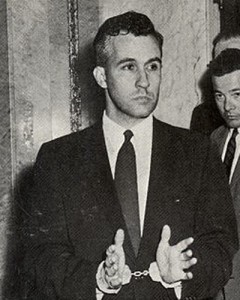 “I shall write no messages which I know will never be delivered — only this, which will be: You will never discover who helped me, for he is to be found in your multitudinous ranks, at least outwardly.”

I think it was the black and white image of Yockey on the back of the Noontide Press’s paperback edition of Imperium, exiting the Federal Building in San Francisco handcuffed and surrounded by US marshals, that first caught my attention. Suave and dapper in his jacket and tie, the prisoner seemed to be sweeping out of the doorway, his jaw set for battle and dark hair swept back in a brilliantine coiffure. Deputy Marshal Alex Koenig’s raven-black eyes were drilling into the back of his neck.

The book’s front cover, featuring the Sword of Truth being thrust by a pair of clasped hands into the dark cloud of unknowing, is quickly followed by Willis A. Carto’s introduction:

Dimly, I could make out the form of this man — this strange and lonely man — through the thick wire netting.  Inwardly, I cursed these heavy screens that prevented our confrontation. For even though our mutual host was the San Francisco County Jail, and even though the man upon whom I was calling was locked in equality with petty thieves and criminals, I knew that I was in the presence of a great force, and I could feel History standing aside me.

These are feelings akin to those I sense when I stride along the windswept dunes of Cuan an Bhriotais or Brittas Bay, a scene Yockey would have once gazed out upon while drafting his magnum opus — a five-kilometer stretch of powdery white sand in the parish of Dunganston in the barony of Arklow in the southwest corner of County Wicklow.

Brittas’ peaceful rhythm had, a millennium and a half ago, witnessed the pagan Irish driving the Gallic Saint Palladius and his zealous missionaries back into the sea, and a seventeenth-century pirate, Captain Jack White, intercepting British merchant ships to the growing annoyance of the Crown from the fastness of his secluded cove known as Jack’s Hole.

Here, secluded and undisturbed, Yockey wrote frenetically, conjuring up a philosophical text without notes that would forever secure his place alongside Nietzsche and Spengler in the annals of our movement. The preface to Imperium proudly declares:

Imperium presents unique and almost esoteric political, social, and historical definitions and explanations which shall become more widely known — indeed commonly understood — if our West survives. . . is probably the first book to advocate European unification — to dogmatically predict it — in terms other than the crassly materialistic. . . the first comprehensive and profoundly constructive alternative to the Marxist-Liberal degeneracy surrounding us. . . the creation of a man who believed in his own destiny — and in this book — so thoroughly that he became a martyr to it.

This makes his sudden and inexplicable loss some six decades ago even more of a tragedy.  Few among us today can match his insight and piercing intellect — he was a visionary who has, through his seminal works, recalibrated a small coterie of our best thinkers. Yockey was a man inspired by Nietzsche’s famous aphorism of 1885:

The time for petty politics is past; the next century will bring the struggle for the dominion of the world — the compulsion to great politics.

Yockey, in life as in death, not only proved himself to be equal to the challenge but sufficiently committed to our cause to be willing to die for his beliefs — which rather presupposes the question: are we?