When You’re Black, They Let You Name ‘Em 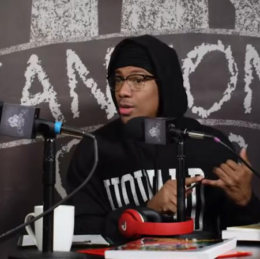 But on a recent podcast, Cannon sounded far more like a Nation of Islam preacher than a primetime entertainer. He was joined on his podcast by Richard “Professor Griff” Griffin of Public Enemy fame. Griff famously got in hot water in the late 80s for attacking Jews and was forced out of Public Enemy. The two had a wild discussion about whites and Jews.

Nick Cannon says white people are "a little less," "closer to animals," "the true savages," "acting out of a deficiency so the only way they can act is evil." When does he get canceled? pic.twitter.com/vK3TBDW9i8

Unsurprisingly, the comments caused controversy and resulted in one of Cannon’s employers, ViacomCBS, firing him. However, Fox stood by him after he apologized for his comments and said rabbis helped him stop being anti-Semitic. There was no apology given for his anti-white comments, and only a handful of conservatives complained about those comments. It’s okay to demonize whites, that’s just the way of the world. . .

Former NBA star Dwayne Wade tweeted that he stood with Cannon and told him to “keep leading.” Wade later backtracked and said he didn’t mean to endorse Cannon’s comments.

Popular black radio host Charlamagne Tha God was far stronger in his Cannon support. He agreed with the rapper’s attacks on whites, saying whites are guilty of “mass racial violence in this country.” He wasn’t as forthright in defending Cannon’s Jewish comments. Instead, Charlamagne essentially said it was bad optics to attack Jews because they “have the power.”

Cannon isn’t alone among black entertainers in courting “anti-Semitic” controversy. Philadelphia Eagles wide receiver DeSean Jackson shared fake Adolf Hitler quotes on Instagram that claimed blacks were the real Jews and that the fake Jews extort America. He also shared Louis Farrakhan speeches. He apologized for the remarks and agreed to visit Auschwitz to educate himself. He suffered no rebuke or punishment from his team or the NFL. That contrasts with white athletes who get mired in controversies. For instance, NHL player Brendan Leipsic’s contract with the Washington Capitals was terminated over “sexist” text messages in May.

Jackson, like Cannon, received support from prominent blacks. Former NBA player and Black Lives Matter activist Stephen Jackson (no relation) said the Eagles player spoke the truth. Fellow Eagle Malik Jackson (also no relation) defended his teammate and the “honorable Louis Farrakhan” for speaking the truth. New Orleans Saints player Malcolm Jenkins dismissed the outrage against Jackson. “We can honor the Jewish heritage and trauma while staying focused on what matters,” Jenkins said in a social media post. The implication is that black concerns matter more than Jewish ones.

Rapper Ice Cube also incurred the wrath of the media last month for sharing anti-Jewish memes and praising Farrakhan. Unlike the other celebrities, he didn’t apologize and he attacked his critics for being racist sellouts. He hasn’t lost any opportunities due to his tweeting. Ice Cube, like Cannon, has in recent years become an inoffensive black entertainer and starred in several kitschy family comedies. That image contrasts with his gangsta rap and past affiliation with the Nation of Islam. He drew accusations of anti-Semitism in the early 90s for criticizing Jews in his lyrics. His anti-white lyrics and praise of the 1992 LA riots drew significantly less outrage.

Rap mogul Sean “Diddy” Combs (formerly known as Puff Daddy and P. Diddy) promoted Farrakhan on his Twitter account in early July. He hasn’t apologized for the association, nor have any of his businesses suffered for his broach of political correctness.

These controversies reflect the broader Black Lives Matter movement and the black community as a whole. Many BLM leaders are fervently anti-Zionist and are fond of Farrakhan. That has greatly upset the Jewish community, who demand BLM disavow anti-Zionism. No BLM leaders have done so, and the movement continues to be endorsed by every corporation, celebrity, and Democrat. BLM doesn’t seem to mind the anti-Semitic accusations. Recent attacks on Jews in America have been overwhelmingly committed by blacks. Blacks who live near Jewish communities despise their neighbors and want them gone.

There is a bevy of articles criticizing blacks for indulging in anti-Semitism and how it betrays the cause of racial justice. “It’s so disheartening to see people from groups that have been violently marginalized do the same thing to others without realizing that perpetuating this kind of bad logic is what perpetuates racism,” basketball legend Kareem Abdul-Jabbar wrote this week. “Like anti-Black racism, anti-Jewish racism cannot have a place in any legitimate anti-racist liberation movement,” declared Daily Beast writer Cassie Da Costa. “The unfortunate truth is that some Black Americans have shown a certain cultural blindspot about Jews. Stereotypical and hurtful tropes about Jews are widely accepted in the African American community,” bemoaned sports writer Jemele Hill. She added: “The thirst for liberation and equality can never come at the expense of dehumanizing other marginalized groups — especially at a time when hate crimes against Jews have increased significantly.”

Black athletes and entertainers are being encouraged to engage in politics and share whatever they find. The people encouraging them shouldn’t be shocked when blacks begin sharing Farrakhan videos and claiming they’re the true Jews. Black Twitter loves this stuff and many other fringe ideas, like the world being flat and that black crime is actually committed by whites in black silicone masks. Blacks don’t have to worry about suffering real consequences or inspiring thousands of articles about their dangerous embrace of misinformation because they are America’s gods. Liberals must tiptoe around them and never offend the divine among us.

» The Birds Or: Everything You Always Wanted to Know About Coronavirus (But Were Afraid to Ask Hitchcock & Heidegger), Part Nine