A Second Look at the Third Amendment 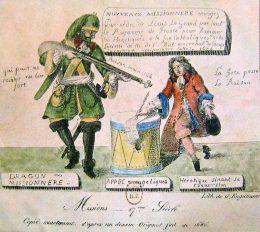 A French dragoon harassing a Huguenot.

The Third Amendment is, unsurprisingly, the least litigated out of all Constitutional amendments. Its effect on Constitutional law is almost nonexistent. While everyone may be glad that “no soldier shall, in time of peace be quartered in any house, without the consent of the owner, nor in time of war, but in a manner to be prescribed by law,“ it probably would not have been an issue regardless of if it was enumerated, or left in the catch-all unenumerated rights of the Ninth Amendment. That so-called conservatives have been remiss in not asserting the vast unenumerated rights of the Ninth Amendment, which are supposed to be informed by common sense and tradition, while liberals have invented several idiocies from it is a separate matter.

Contrary to popular belief, the amendments of the Bill of Rights are not ordered according to their importance, but rather which part of the Constitution they would have modified. That the Bill of Rights was not organized in order of importance with the Second Amendment placed first with “shall not be infringed” written in massive, deluxe-size all-capital letters and with an extra “at all!!!” at the end can be forgiven, as the Founders could not have conceived that the Republic would have to weather Jewish subversion. Foreign tyrants and domestic ambition are much easier to check. Alas, the halcyon days of generic subversion have long passed.

The Third Amendment might not have been third in importance, but it was still important enough to the Founders that it made the top ten list in 1789. It was not added by accident, nor on a whim. Why, then?

A common criticism leveled at the Founders by the usual suspects is that they were evil, reactionary, self-interested, rich white men. As such, the Constitution should either be mutated beyond recognition to keep up with the latest trendy fads, or that despite being White supweeemacists, the Founders somehow — by accident or design — drafted a document that leads to infinity immigrants and drag queen story hour. Increasingly, the Left has stopped pretending to use the second argument that cuckservatives lap up, and openly embrace the first. The motivations for the Third Amendment strongly undermine the notion that the Founders were myopic, and as we shall see, far from being archaic, it still has important lessons for us in the current year.

Another common myth that must be dispelled is that the British were quartering soldiers in the homes of citizens. This is not true, although the language of the Third Amendment seems to suggest it is. Instead, the Quartering Act required the Colonists to build barracks for the British Occupational Government. If not sufficient, then the soldiers were quartered in taverns. If taverns proved to be insufficient, then — and only then — would they be quartered in stables. Forcing American horses to share the company of British pigs may have been distasteful, but it is still a long way off from thugs tyrannizing citizens in their own homes.  Therefore, even though the intolerable Quartering Act was a major inspiration for the Third Amendment, neither should it be seen as a mere reaction to particularized grievances.

Instead, the Founders found their inspiration for the robust language of the Third Amendment by looking across the waves to the tyranny visited upon the French Huguenots, about a century prior to the American Revolution. This is one of numerous examples of how the Founders were well-informed by the lessons of Western history, unlike the tenured college professors who criticize them. Having gone full Trad Cath Monarch, Louis XIV quartered troops in Huguenot homes not as an incident of military necessity, but with the express intent of making them leave the country or convert to Catholicism through state-sanctioned harassment. This further reveals the wisdom of the Founders, because unlike modern pseudo-academics, they understood that the slippery slope is a political reality, not a logical fallacy. Any quartering of any soldiers amongst a civilian population is too conveniently close to ordering them to brutalize the people into submission. Any infringement by the government, no matter how minor, upon any of the Nation’s rights, either enumerated or implied, should be treated with extreme suspicion, as small infringements compound upon each other and set the precedent for larger ones.

While the black letter law of the Third Amendment might not be litigated, the spirit of those letters is of great importance to our current struggle to restore National Sovereignty. It reflects the principles that a free people should not have to pay for their conquest, and of privacy.

First, while the rights of free speech and to bear arms have been eroded less in America than in Europe, the right to privacy has become a farce. What we know of the NSA, the Deep State, and Faceberg is troubling, and even more so when it implies that there is much more that we don’t know. The invasions of privacy that began with the suspiciously-passed and ironically-named Patriot Act, which were originally directed at foreign terrorists who shouldn’t even be here, have adroitly been repurposed to spy on Americans who think that being replaced by third-worlders is stupid, under the flimsy argument that anyone thinking something so basic must be an unstable terrorist. Strangely, our country was terror-free in the 1950s when such ideas were the norm, with terrorism only becoming an issue in the 1960s with drug-addled communist radicals, and later with Islamic invasion. It would be unsurprising if the ultimate goal of the Patriot Act was to spy on patriotic Americans from the very start.

Antifa is also allowed to tortiously invade the private affairs of citizens via doxing without facing any consequences. This is similar to the harassment faced by the Huguenots — both involve the state outsourcing harassment to thugs and then happily looking on, the egregious violation of basic privacy, and an ideological motivation. Nothing concrete can be proved as of now, but it is also suspicious how many Antifa cells are so adept in their doxing methods to a point that suggests possible government training, even if they may have received such training from an undercover agent. It would be interesting if documents are one day found showing that the Deep State directly aided Antifa. Not that cuckservatives would do anything except cry about it for a few days, and then return to being well-behaved house plants.

This right to privacy was even formally announced in Griswold vs. Connecticut. There, the Supreme Court held that the Third Amendment — along with several others — create penumbras, or cast shadows, that create a right to privacy. That this was announced in a case that threw open the gates for mass contraceptive use is unfortunate, as contraceptives and their consequences have been a disaster for Western Civilization. Perhaps this was a good lesson in how purity spiraling makes it easier for the subversive Left to undermine common sense and tradition; purity spiraling allows them to battle a straw man. Even Justice Black, who dissented, thought that the Connecticut statute was “uncommonly silly.”

Regardless, if we must have the bitter of mass contraceptive use and the resultant thottery poured down our Nation’s throat, there is no reason why we should not also insist on getting the sweet; especially because there are many rights in this privacy penumbra that actually are in accordance with American culture. Freedom from social media snooping and alphabet agency surveillance are prima facie examples of such privacy rights which have been shredded, and which the Dissident Right should vehemently insist upon. Given how Conservatism Inc. has failed to put up any meaningful fight for these rights and how they are of increasing importance to our people, advocating for these privacy rights is a great way to legitimize ourselves while delegitimizing our adversaries.

Second, there is also a surprisingly rebellious spirit lurking quietly within the Third Amendment.

To expect a free people to pay for their destruction is to emasculate them. We should not submit to subsidizing third-world invaders who then go on to occupy various parts of our country, such as our parks, highways, and schools, any more than we should acquiesce to quartering soldiers who are there to tyrannize us. While foreign gangbangers cannot requisition our houses for raucous house parties that go until 2:00 AM, Americans increasingly must endure the invasion of other spaces. We are then expected to subsidize these foreign invaders who have no respect for us, and objecting to this irrational arrangement has been made tantamount to heresy. There are increasing numbers of armed, military-aged men organized into criminal gangs amongst these invader communities, and so they have come to resemble an occupying army that feels free to push our citizens around while at the same time essentially being fed, housed, and clothed by them.

Like the rest of the Bill of Rights, the Third Amendment should not be dismissed as a product of its time. Its underlying motivations are of perennial concern, and it retains direct relevancy to our current Nationalist struggle.