My Easter Dinner with Fate 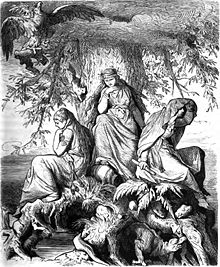 Ludwig Burger, The Norns under the World, 1882.

For Easter dinner, I had a glass of red wine, a pizza, and a slice of cheesecake. Regardless of my location, it has become a tradition for me. With the current pandemic, a heavy metal concert, and a first date in Ukraine, I have somehow ended up celebrating Easter each year with wine, pizza, and cheesecake. Perhaps it is fate. Yet it was a dinner with friends three years ago that made me question the many nuances of fate. Could an invitation to that dinner have saved a man’s life from tragedy, or would his life have taken the same path?

This time last year I was attending a heavy metal festival in Italy. By the time I got back to the hotel, most of the restaurants were closed. Therefore, I decided to order room service and within an hour I got a glass of red wine, a pizza, and a cheesecake delivered to my room. In 2018, I was living in Ukraine and was getting to know a woman from an online dating site. Since most places were closed, we decided to have our first date at an Italian restaurant. Not surprisingly, I ordered red wine, pizza, and cheesecake for dessert.

In 2017, I became roommates with a friend in the Dissident Right. He had just purchased his own property and was looking for a temporary roommate to help with the initial moving costs. During my stay there, my roommate invited me to some of his social events. One of those events was a martial-arts meeting at a local park. We met the people holding the event and started doing exercise drills of various self-defense moves as a group. After the initial exercises, the group split into pairs and each pair was given boxing gloves so that we could have sparring rounds. We were matched with partners of a similar height and weight, so I was paired with a person from the group I didn’t know. His name was Jeff.

Since we were practically the same size, we ended up sparring together for five three-minute rounds. I remember him being a tough, fearless opponent. I could see the fighting spirit in his eyes during each round. Yet between each round, we congratulated each other while also making sure that we didn’t have any major bruises or injuries. After the fifth round, we both decided that we had exerted our energy and passed our gloves to another pair.

While the other pairs finished sparring, I had a good conversation with Jeff. He was several years younger than me, but his background reminded me in many ways of my own experience growing up. Jeff started noticing all the anti-white propaganda as a young teen in middle school. When he started questioning the anti-white narratives, he was often reprimanded by his teachers and even attacked by his non-white peers. Unlike me, his family wasn’t supportive of his views or concerns about white people becoming minorities in their own countries. Eventually, Jeff would continue his red-pill journey through the internet and online forums. It was through these forums where he would eventually meet like-minded people, and those people brought him to the martial-arts meeting in the park.

As is often the case, our conversation quickly went to more light-hearted subjects such as women, video games, and movies. While we had our differences, I thought that he had a humble personality, an honest character, and a good sense of humor. When the rest of the guys finished their rounds, I came up with the idea to invite Jeff out for dinner and drinks with me and my roommate.

I thought my roommate would be open to the idea of inviting Jeff to hang out with us, but he quietly told me that he didn’t think it was a good idea and that he would explain his reasoning later. I was surprised by his response but respected his decision. Thus, I went over to say goodbye to Jeff and told him that it was an honor to meet him and to spar with him.

After the event, we met a different group of friends at an Italian restaurant. Over red wine, pizza, and cheesecake, my roommate explained to me that some of the people at the meetup earlier were known to post “edgy” content on social media. These same people were also known to be “troublemakers,” for lack of a better word. My roommate wasn’t talking about Jeff, but he was talking about some of the friends that Jeff was with. While I trusted my roommate’s judgment, I kept debating in my mind whether I should have invited Jeff to dinner with us. I even felt a little guilty for not inviting him.

Around two weeks after the event, I got a contract job in another state. I moved away, and when the contract was terminated at the end of 2017, I moved to Eastern Europe. It wasn’t until late 2018 that I heard what happened to Jeff. Apparently, he had been going to high-profile events and making controversial posts on social media. It was from these events and controversial posts that Jeff had been doxed, slandered by the media, and arrested on questionable charges. Along with some personal tragedies, he ended up going to jail for several months. I found this out by reading the slanderous hit-pieces written about him by various anti-white media outlets over the last year.

If I would have invited Jeff to that dinner after the martial-arts event, could I have made a difference in his life? Could I have introduced him to a different group of people that might have guided him on a different path in life? Or would he have still made the same choices and decisions?

To be honest, I don’t know. My gut instinct tells me that it probably wouldn’t have made a difference, but part of me wonders if the opposite would have been true. After all, we as human beings do make a tremendous impact on each other’s lives. I guess the question boils down to whether you consider a person’s destiny being dependent entirely on one’s own actions, or whether our fate is somehow predetermined. This is a question that philosophers and religious leaders have debated throughout history.

In Greek mythology, the Moirai, also known as the Fates, are the three females who spin the yarn of life for every human from birth to death. Their names are Clotho (the spinner of life), Lachesis (the drawer of lots), and Atropos (the inevitable death). Norse mythology has a similar concept with the Norns, the three women who weave the thread of men’s fate at the foot of Yggdrasil. Their names are Urd (fate of the past), Verdandi (fate of the present), and Skuld (fate of the future). Skuld can also mean “debt” or “guilt,” as in the debt or guilt that all men must pay for.

When Jeff and I were talking about movies, we briefly talked about Terminator 2. Throughout the film, the teenage John Connor repeats the phrase “no fate but what we make.” This concept is the opposite of a pre-determined fate. It postulates that there is no predetermined fate and that our future is completely up to our choices, decisions, and actions. In this view, Jeffrey’s fate was, and is, ultimately up to him.

There’s a song by Running Wild called “Prisoner of Our Time” and this title really expresses my feelings on the matter. I think we as human beings are both products and prisoners of the time, culture, and society we live in. I do think to a certain extent that our fate is somewhat predetermined. Yet I also think that the choices, decisions, and actions we make each day impact how we may or may not reach our greatest potential. We may not be able to help every white person in our community, but we can strive every day to be good role models as white advocates. We can also work on identifying the white people in our lives that we can help and make a positive impact on.

The Norns of fate have weaved completely different paths for Jeff and me. Yet there are many opportunities for him and all of us to make the most of each day and to strive to be the best we can be. We may never know if or to what extent our fate has been decided. But I do know that being a white advocate and serving white well-being can make a positive impact on the lives of our people. And if I ever meet Jeff again, I would invite him to have dinner with me and my friends; somewhere that has red wine, pizza, and cheesecake on the menu.

» The Anglos & the Modernity We Live With