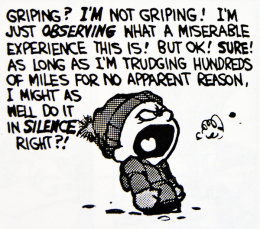 In the mid-1990s, actor John Leguizamo produced a pretty funny comedy sketch TV series called House of Buggin’. In it, I remember a game show parody in which contestants of different races got to gripe about, well, other races (sorry, can’t find a link, so I’m going on memory here). But when it was the white man’s turn, the emcee (played by Leguizamo) scolded him, and told him that because he was a white man, he wasn’t allowed to complain about other races. So our white male contestant settled on something more anodyne: the liberal media.

It was funny then. It’s not so funny now.

When people are unhappy, they gripe. We all know this. But what happens when what you need to gripe about is taboo? Imagine a world in which the price attached to griping about what’s really bothering you is too high to pay. Suppose you would face financial ruin or social ostracism for daring to speak the truth about your unhappiness? What then? In most cases, people would continue to gripe, but would focus on other, less taboo, topics — topics that bear only a secondary or tertiary relation to the truth behind their troubles.

Well, we don’t have to imagine such a world, because that is very world whites in the West live in today. Whites are not allowed to speak about what’s truly bothering them as a demographic, namely, racial replacement, high rates of non-white crime, illegal immigration, overall cultural decline, and a foreign and hostile elite that is either directing or tolerating all of this.

So then what do whites typically do?

Well, one option is to become a libertarian. If you think of human beings as Homo economus and concern yourself mostly with money, you can address most of your problems. Places like Detroit have become bombed-out ruins not because of race but because of corrupt, spendthrift politicians that line their own pockets, raise taxes, and ignore whatever debt they accrue. These three symptoms become the disease in the minds of libertarians, and they spill gallons of ink and thousands of hours every year attempting to combat them. For the libertarian, everything will be fine as long as people worship the twin gods of free markets and limited government.

Of course, they’re not entirely wrong. Libertarianism wouldn’t be attractive to so many people if it didn’t make sense within its limited framework. Economics is a worthy topic of study, abusing public funds is a bad thing, and limited governments do have their virtues. There is a time and a place to think about money and to view human beings as economic actors. But there is a reason why libertarianism has failed to turn the tide against the Left in the culture wars. Boiling our most dire troubles down to economic factors is quite plainly a specious solution; it betrays a demonstrably flawed perspective on humanity. People are more than just economic actors. Intelligence and temperament, both of which are heritable and measurable along racial lines, have perhaps more to do with our decision making than dollars and cents.

Because libertarianism gets at the racial malaise of whites through the intermediary of economics, it offers a less direct — and less effective — cure. Our left-wing cultural elites know this, and while they might find libertarianism somewhat annoying, they tolerate it because they know they can defeat it. This is why white people are allowed to gripe about money. It distracts them from what they should really gripe about.

Another option for whites is conservatism. Tied closely to this is Christianity. Essentially, we are referring to the worship of God and tradition. Some of the main thrusts of Russell Kirk’s The Conservative Mind include the belief in a transcendent moral order, the rejection of utopianism, and the idea that cultures evolve slowly through necessity. Certainly, such a mindset rejects the Left, and can account for much of what is distressing whites these days. To take the aforementioned Detroit example, the city and others like it are in manifest decline because our elites have abandoned God, have become in thrall of utopian schemes, and tend to employ them in radically short order. All of this is true, and if conservative Christians are to be heeded, much of the solution lies in reversing these trends. But in this case, is correlation proof for causation? Couldn’t it also be that the tendency to truly believe in a transcendent order — at least the kind the Russell Kirk describes — is dependent at least somewhat upon race? Couldn’t the same also be said about resisting utopia and radical change? And, perhaps most importantly, couldn’t it be that some races are by their nature less violent than others?

This would help explain why most of the great scientific, political, and philosophical advances throughout history occurred in Europe or its former colonies. Europeans have long ascribed an objective Truth to their God or gods, and have used this to construct ethical worldviews as durable as they are comprehensive. Most non-white civilizations compare poorly in this regard and adopt Western models when given the chance (often imperfectly). So, quite possibly, race may have something to do with the kind of beatific ethos envisioned by Christians and conservatives.

The problem, however, is that conservative Christians do not even entertain such a possibility. They are not allowed to, you see. As a result, they think they will find solutions by retreating into scripture or standing by dying traditions rather than discussing what could very well be the heart of the matter.

What attracts me to the Dissident Right is how it completely dispenses with long, convoluted solutions for problems that are really quite short and direct. When dissident rightists gripe, it’s real and it’s pure. They see the problem clearly and they form a straight line in attacking it. And what is the problem? Whites in the West have lost their nerve, and, as a result, are retreating against the rising tide of color. If this trend isn’t reversed, the result will be oppression and eventually extinction at the hands of their invaders. What I just wrote in the past two sentences drills down to the core of our difficulties better than all the sophistry that libertarians and conservatives commonly resort to. Nothing cuts deeper than race. This is, essentially, the core tenet of the Dissident Right: absolutely true and forbidden to say.

So for those readers who are dissident-curious or dissident-skeptic, doesn’t it offend you that some manner of griping has been placed entirely off the table? Isn’t there something utterly ignoble about that? I fully submit for the sake of argument that Dissident Right ideas may be flawed or incorrect somehow. But with a ban placed on it within mainstream society, how can we prove it? If no one is willing to man up for a debate, how will we ever know for sure?

Most importantly, how can you prefer other modes of resistance to the Left? Libertarians, conservatives, Christians — and, to a lesser extent, civic nationalists, patriots, gun rights activists, and the Manosphere — all have a place where they fear to tread: race. And this fear is not due to any moral scruples as much as it has to do with a fawning respect for the power of our elites. A white person speaks out on race the wrong way, and he can be ruined. Just ask James Watson.

The Dissident Right shares this fear, I’m sure (I know I do). But it remains apart from these other groups because it is also willing to overcome this fear for the sake of something greater: the principles for which it stands. Yes, these principles include, first and foremost, the right for a great people to survive and thrive.

But next on that list is the unalienable right to gripe.